Gold has long been valued by societies all over the world for its inherent lustre and malleability. Today, traders treasure gold (XAU/USD) because it is often viewed as the ultimate safe-haven asset, usually weathering market turbulence and retaining its value in periods of uncertainty. Traders also use gold to hedge against inflation and diversify their investments because gold often reacts differently to market stimuli than other assets.

What influences the price of gold?

The U.S. dollar: One of the biggest points of contention for gold traders is on the true correlation between gold and the U.S. dollar. Because gold is priced in U.S. dollars, it would be logical to assume that the two assets are inversely correlated, meaning that the value of gold and the dollar move opposite to one another.

Unfortunately, this overly simplistic view of the correlation does not hold in all cases. Periods of financial stress can cause the U.S. dollar to rise and gold to spike rapidly. This is usually because traders will buy both gold and the U.S. dollar as safe-haven assets in these periods of uncertainty.

As with any trading instrument, there is no single “best” way to trade gold. Many traders from other markets have found that the technical trading strategies they employ on other instruments can easily be adapted to the gold market, especially given gold’s tendency to form durable trends.

A 10/60 moving average crossover on the 1hr chart can be a strong combination for shorter-term traders. Historically, these settings have allowed traders to successfully trade the middle portion of a trend, though there is no guarantee of future performance. The chart below shows how this strategy could be applied in the gold market: 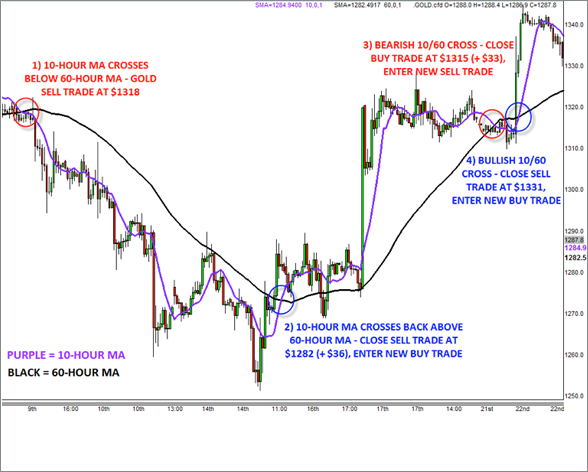 At point #1, the shorter-term 10-hour moving average crosses below the longer-term 60-period average, suggesting that traders should enter a sell trade as a bearish trend may be forming. The moving averages do not cross again until point #2 a few days later, after gold has trended down to the upper $1200s.

At point #2, the initial sell trade is closed for a solid gain and a new buy trade is triggered as the trend shifts back to the topside. After a brief consolidation, gold rallies back into the lower $1300s, and the trade is closed on the bearish moving average cross at point #3.

Like any methodology though, this strategy will produce losing trades as well. In this case, the big spike near point #4 caused the sell trade from #3 to be stopped out for a loss. It’s also important to note that the trade must be closed at the market price (near $1330) when the cross occurred, not the $1315 level where the two moving averages actually crossed.

Longer-term position traders and investors can focus more on the fundamentals that drive gold’s price, such as the level of real interest rates. The chart below shows the relationship between gold prices and the yield on TIPS, a proxy for real interest rates in the United States.

The inverse correlation is obvious, but it looks like gold’s rally accelerated as real yields dropped below 1% in early 2009. Not surprisingly, a longer-term look at the relationship would reveal that gold prices generally fell in the late 1990s, which were characterized by real yields above the 1% threshold. 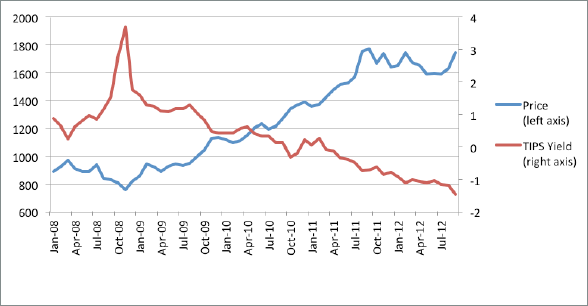