What is swing trading and how does it work in forex?

Rather than a trading strategy, swing trading is a style of trading in which the objective is to capture gains within a relatively short timeframe.

It is distinct from day trading, where the aim is to make a profit within a day. And it is also not a long-term play, in which the trade can be left alone for months, or even years.

Swing traders will seek trading opportunities within a timeframe that could be anything from a few days to several weeks. Again, certain traders will err on the shorter side of that timeframe; others will have a longer vision.

These traders primarily use technical analysis to look for trading opportunities. That is to say they are hunting down perceived openings by observing price trends and patterns seen on charts.

Why do forex traders use swing trading?

In relation to the forex market, swing trading is very popular. A swing trader is not concerned with the long-term value of a currency; he is instead looking to profit simply from peaks and dips in momentum. The high liquidity, tight spreads and 24-hour-a-day nature of forex markets (during market hours) all work in favor of swing trading.

The example below concerns a chart from 2019 showing the NZD/USD index. The general picture suggests a downward trend in the value of the New Zealand dollar. However, the swing trade depicted actually captures an upwards movement. 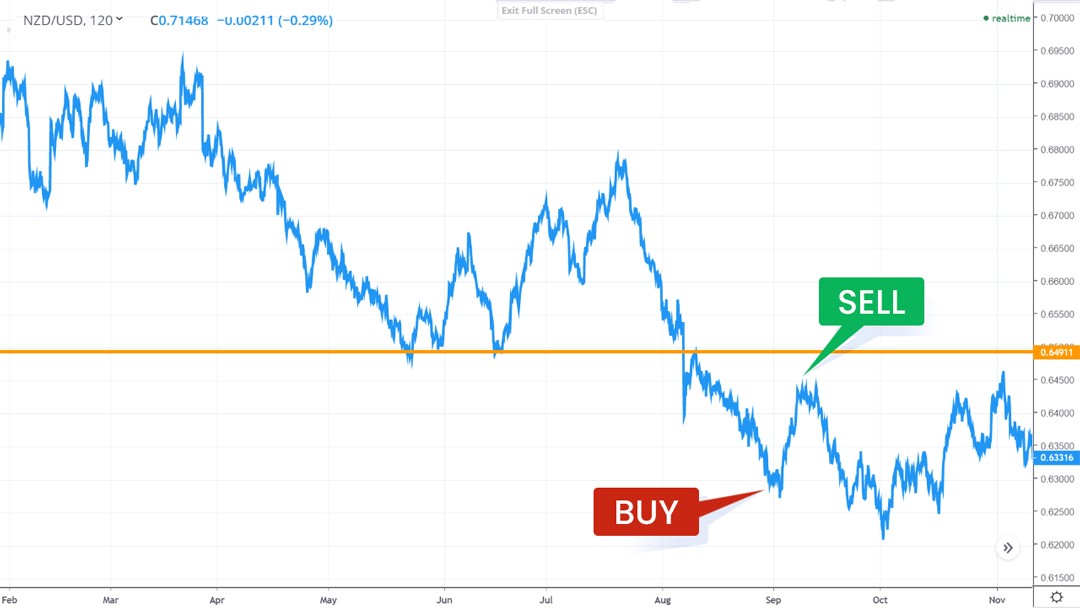 First of all, look at the orange horizontal line. This represents what is known as a level of key support. Between late May and the middle of June, we can see that it was tested on three separate occasions but held up.

However, after a period of recovery, the New Zealand dollar plunged past the 0.649 level line and continued to fall. It was at this point that the possibility of a swing trade loomed into play. By the time it reached 0.630 it was already trading at a level around 9% below where it was in March. In fact, NZD had not been worth as little as 63 cents for four years.

Consolidation after a sharp dip can prompt a ‘buy’

Have another close look at the graph. Where the red arrow is, if you look hard you can see that having been in freefall for weeks the chart was consolidating at around that 0.630 level.

This is a common indicator traders will use to forecast a swing opportunity. Remember, we are not looking at the long-term value of a pair, but rather its potential to experience a quick price movement in the near future.

So the red arrow indicates what, with the golden value of hindsight, would have been an advantageous moment to buy NZD. When you hear talk about “buying the dip” this is exactly the situation a trader is seeking.

Initially, NZD plunges even lower, but then rebounds sharply so that within a few days it is up close to 0.645 (where the green arrow is positioned). A trader who now closes his position somewhere around here, having bought somewhere around the red arrow, has successfully executed a swing trade.

Consider the importance of discipline here. A trader who wanted to hold his position and wait for even bigger profit may have encountered problems: the line soon swung back down, eating into any potential profit. The 0.645 mark was not reclaimed until November, in fact. It’s really important not to be guided by emotions and remain clinical in all aspects of trade execution.

Please be aware that past performance is not indicative of future results.

What is the value of take-profit and stop-loss orders?

Timing is everything, and given the nature of the markets, trading 24 hours a day for six days a week, it is a sensible idea to set take-profit and stop-loss orders so you do not constantly need to monitor price movements.

One final point on this graph: remember the orange line? Having initially been earmarked as a level of key support, since early September it has flipped to become a level of resistance. In other words, it appears difficult for the market to break back above that level.

Now let’s look at something else. Earlier in this article, we mentioned the concept of technical analysis. Traders use a wide range of technical indicators, all of which can be easily applied to the FOREX.com web trading platform, to inform their trades.

It would require exhaustive analysis to explain all of them in a single article of this nature, but this is a good opportunity to introduce one of those more commonly applied in forex trading, and specifically swing trading.

Below, is a EUR/USD chart from the spring of 2019. The chart comes with a contemporaneous Relative Strength Index (RSI) positioned directly beneath it. RSI is just one of a plethora of technical indicators that can be easily applied free of charge on the FOREX.com web trading platform, whether you are running a funded account or trying the risk-free demo account. 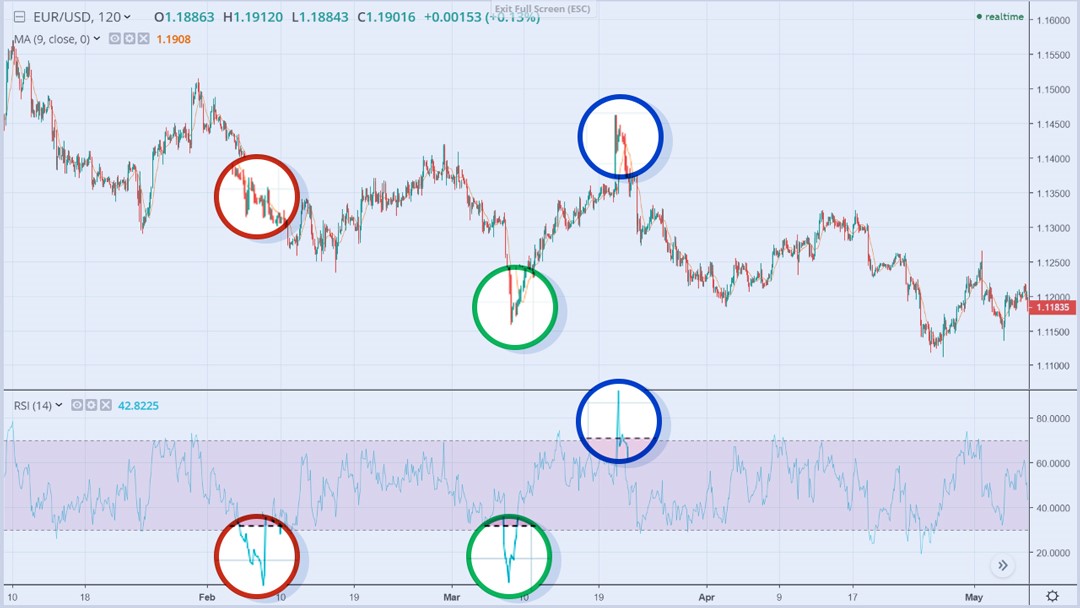 So let’s first explain what RSI is. Developed in the 1970s by J Welles Wilder Jr, it is a momentum oscillator that measures the speed and change of price movements. The RSI gauge oscillates between zero and 100.

Traditionally the RSI is considered overbought when above 70 and oversold when below 30.

On the chart above the purple band represents the 30-70 range, when a chart is neither overbought nor oversold. However, when it strays below 30 or above 70, the needle leaks into the white and this can be considered an opening for a swing trader.

Let’s look at the two green circles now. The lower circle indicates a breakout below 30 on the RSI metric and suggests a market that might be oversold. It suggests a BUY trade at this point and, sure enough, the RSI suggestion proves accurate as the market rebounds strongly at this point.

But at some point there will be another correction; this duly arrives next time the RSI makes a significant escape from the purple band (lower blue circle). Likewise, a trader pinpointing this as a SELL opportunity, is duly rewarded.

However, RSI is not a tool that guarantees successful trading every time. The lower red circle represents another significant dip into the white. This time, it is not replicated with a rebound in a bearish trend on the graph above.

It’s so important in trading to be aware that not even the best traders in the world will be right every time; the key to being a profitable trader is to be right the MAJORITY of the time.

As mentioned previously, many swing traders find it more comfortable to set up take-profit or stop-loss orders. These have the effect of limiting your exposure to severe negative market adjustments or locking in a profit when the chart moves sharply in a favorable direction.

Let’s look at the chart below: 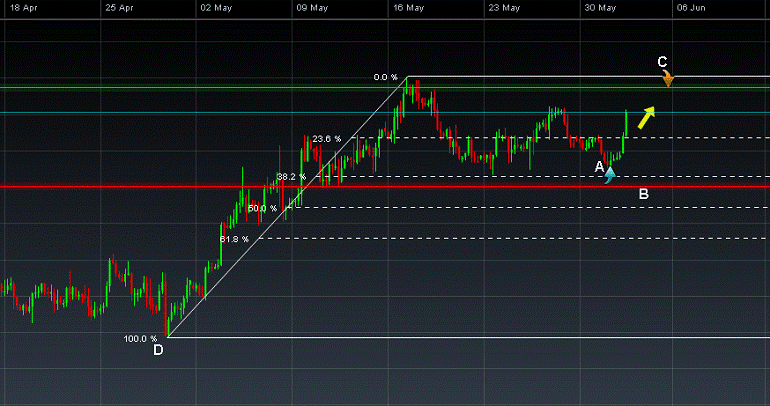 Let’s assume a trader has bought into a market at point A. Soon after making this trade, he could set a stop-loss order should the market not move in the expected (upwards) direction. That order can be placed at a level where the red line is (B).

He may also be minded to place a take-profit order at point C. The stop-loss order would limit any potential losses to manageable levels. The take-profit order is a method of ensuring a profit is banked should the chart regain an earlier established level, without having to worry about what happens beyond that eventuality.

There are many ways of being a successful forex trader. Swing trading is just one of the styles of trading that can produce positive results, however as always it requires a clear mind-set and the discipline to make decisions based on scientific judgement rather than raw emotion.

DISCLAIMER: Forex trading involves significant risk of loss and is not suitable for all traders. Past performance is not indicative of future results.