MORNING TRADING
In Asian trading hours, the U.S. dollar weakened further, as EUR/USD extended its rally to 1.1971 and GBP/USD rose to 1.3394. USD/JPY retreated to 105.67. This morning, official data showed that Japan's industrial production grew 8.0% on month in July (+5.0% expected), while retail sales slid 3.3% (-2.5% expected), AUD/USD climbed to 0.7396 as the Reserve Bank of Australia held its rates unchanged, as expected. Data released earlier today showed that China's Caixin Manufacturing PMI rose to 53.1 in August (52.5 expected), the highest level since January 2011.

#UK - IRELAND#
Dunelm Group, a homewares retailer, posted a trading update: "Sales have been strong in the last two months, with total year over year sales growth up 59% in July, partly as a result of pent up demand following the store closure period and the timing of our Summer Sale, and up 24% in August."


From a technical point of view, the share price is supported by a rising trend line drawn since March. Furthermore, the 20 and 50 DMAs are playing the role of support below the stock. A breakout confirmation of the previous all-time high at 1450p would trigger the possibility of a new up leg towards 1540p and 1655p in extension. Alternatively, a break below 1340p would call for a reversal trend with targets set at 1260p and 1130p in extension. 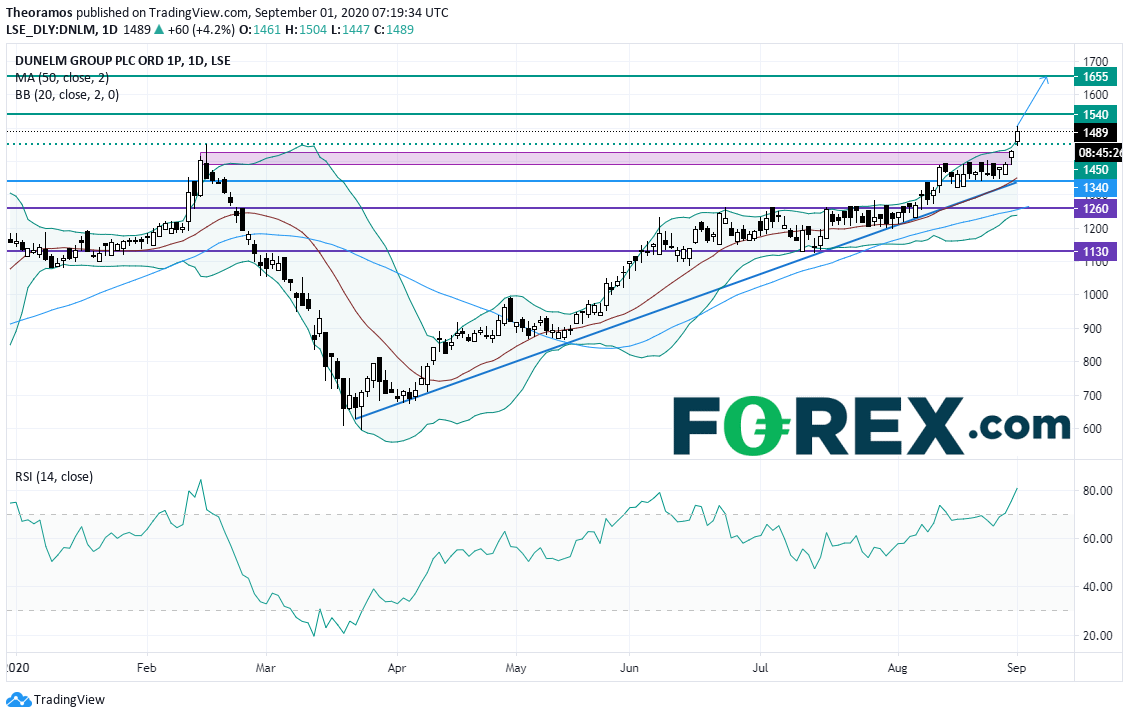 
#GERMANY#
Bayer, a pharmaceutical giant, has agreed to acquire a 70% stake in Care/of, an online vitamin and health supplement company based in New York, in a transaction that values the company at 225 million dollars, reported Bloomberg citing people familiar with the matter.

Zalando, an e-commerce company, was upgraded to "buy" from "neutral" at Goldman Sachs.

Deutsche Wohnen, a property group, was downgraded to "sell" from "neutral" at Goldman Sachs.


#FRANCE#
Engie, an electric utility company, would reject the offer made by Veolia for its 29.9 stake in Suez, as the company is seeking for a higher bid, reported Bloomberg citing people familiar with the matter.

Suez, an utility company, said Veolia's acquisition offer "carries great uncertainties", and "the Board of Directors unanimously reiterated its full confidence in SUEZ's strategic project that will create significant value for SUEZ as an independent company".

Sanofi, a drug maker, reported that the global phase 3 trial investigating intravenously administered Kevzara (sarilumab) at a dose of 200 mg or 400 mg  in severely or critically ill patients hospitalized with COVID-19 did not meet its primary endpoint and key secondary endpoint.


#SPAIN#
Inditex, a Spanish multinational clothing company, was downgraded to "neutral" from "buy" at Goldman Sachs.


#ITALY#
Telecom Italia, an Italian telecommunications group, announced that it has accepted the binding offer of 1.8 billion euros from KKR Infrastructure, which will buy 37.5% of FiberCop. FiberCop is a newly established network company to which Telecom Italia's secondary network will be transferred along with the fibre network.

Davide Campari-Milano, a beverage company, was upgraded to "overweight" from "underweight" at JPMorgan.


#SWITZERLAND#
Novartis, a pharmaceutical group, was upgraded to "overweight" from "equalweight" at Morgan Stanley.