MORNING TRADING
On Sunday, House Speaker Nancy Pelosi called on the government to reconcile remaining disputes on stimulus legislation within 48 hours in an attempt to pass a bill before the 2020 election. Comments by Pelosi helped in raising market optimism about progress on an agreed deal between the government and Congress. U.S. stock index futures jumped in early Asian trading hours on Monday. During Asian sessions, EUR/USD was little changed at 1.1715 while GBP/USD advanced to 1.2937. USD/JPY was broadly flat at 105.37. This morning, official data showed that Japan's exports fell 4.9% on year in September (-2.4% expected) and imports declined 17.2% (-21.4% on year expected). AUD/USD marked a day-high near 0.7108 before easing back to 0.7095. Earlier today, government data showed that China's 3Q GDP grew 4.9% on year (+5.5% expected), while industrial production rose 6.9% in September (+5.8% expected) and retail sales increased 3.3% (+1.7% expected).


#UK - IRELAND#
AstraZeneca, a pharmaceutical group, said its Trixeo Aerosphere has been recommended for approval in the European Union by the Committee for Medicinal Products for Human Use (CHMP) for the maintenance treatment of chronic obstructive pulmonary disease. At the same time, its Forxiga has also been recommended for approval by CHMP in the region for the treatment of symptomatic chronic heart failure.


#GERMANY#
Volkswagen's, an automobile group, Traton announced that it has agreed to acquire the remaining stake in American trucks and diesel engines company Navistar for 44.50 dollars per share, representing about 3.7 billion dollars.


#BENELUX#
Philips, a Dutch multinational conglomerate, announced that 3Q net income jumped 63% on year to 340 million euros and EBITA grew 32% to 769 million euros on revenue of 4.98 billion euros, up 6% (+10% on a comparable basis). The company said it targets an acceleration of the average annual comparable sales growth to 5-6% for the 2021-2025 period, but expects a low-single-digit growth for 2021.

From a weekly point of view, the consolidation channel's upward breakout would call for a new measured move up to 50CHF at least (horizontal resistance from April 2019) and 56.5CHF in extension (neckline of a 2017/2018 head-and-shoulders pattern and upper end of a bearish gap set on 2018, July 23rd). 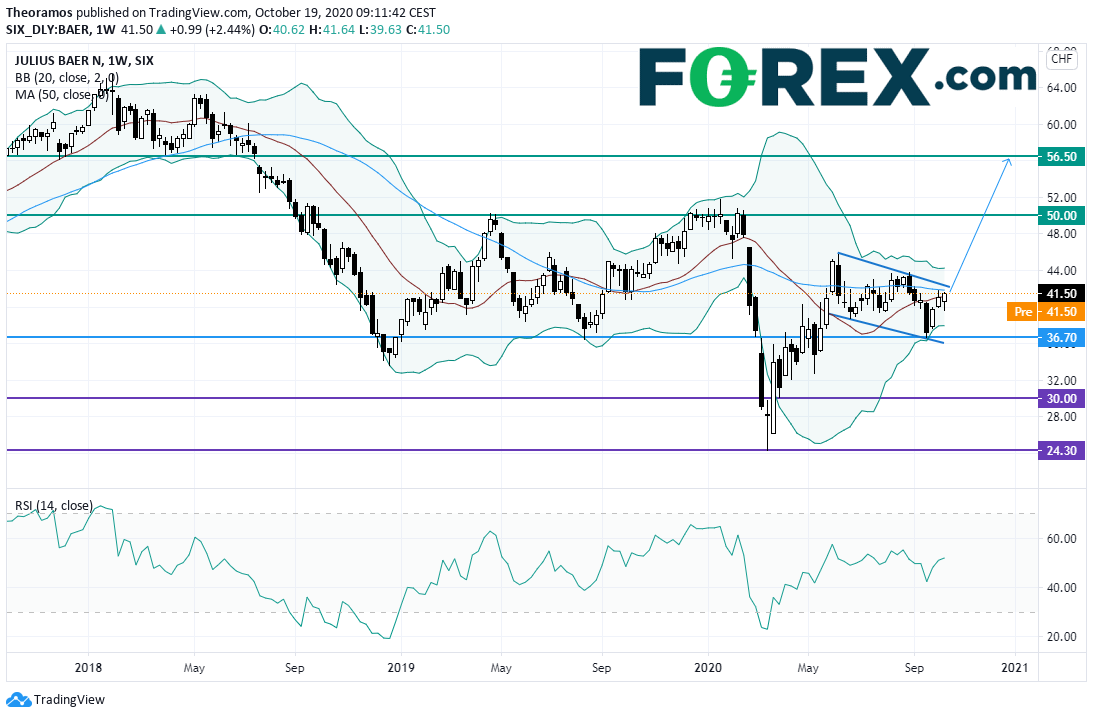