The S&P 500 Futures are little changed after they rallied further yesterday, pushing the Dow Jones Industrial Average (+455 points or 1.54% to 30046) to close above the key 30,000 level for the first time. Investors were encouraged by news reports that formal transition for Joe Biden's potential administration has begun, and that Biden would appoint former Federal Reserve Chair Janet Yellen as his would-be Treasury Secretary.

European indices are posting a pull back after a positive open.

Asian indices closed on the upside except the Chinese CSI. NZD/USD hit 0.7000 for the first time since June 2018, as it was widely expected that New Zealand may not see further interest-rate cuts.

On the U.S economic data front, the Conference Board's Consumer Confidence Index fell to 96.1 on month in November (98.0 expected), from a revised 101.4 in October.


HP (HPQ), a provider of computers, printers and printer supplies, jumped after hours after disclosing fourth quarter adjusted EPS of 0.62 dollar, beating forecasts, up from 0.60 dollar a year ago on net revenue of 15.3 billion dollars, higher than anticipated, down from 15.4 billion dollars a year earlier. The company also issue current quarter earnings guidance that beat estimates. 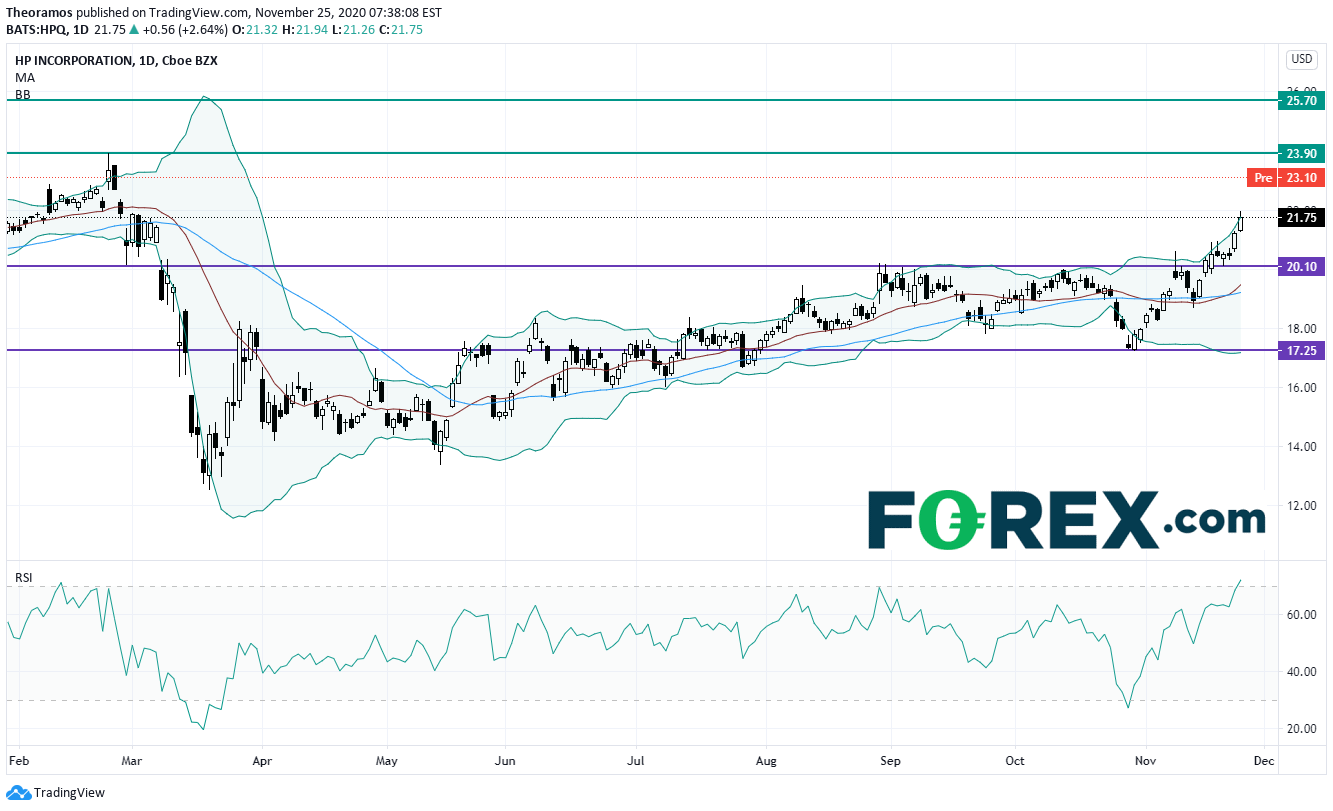 IBM (IBM), an IT company, plans to cut about 10,000 jobs in Europe, according to Bloomberg.

Deere & Co (DE), a manufacturer of agricultural and construction equipment, reported fourth quarter sales down 0.5% to 8.66 billion dollars, beating estimates. EPS was up to 2.39 dollars from 2.27 dollars a year earlier. The company expects fiscal 2021 net income between 3.6 and 4 billion dollars, above forecasts.

Gap (GPS), a retailer of apparel, dived postmarket after announcing third quarter EPS of 0.25 dollar, missing estimates, down from 0.53 dollar a year ago.

Ford Motor (F), the automobile manufacturer, was donwgraded to "equalweight" from "overweight" at Morgan Stanley.

Dollar Tree (DLTR), a discount store chain, was downgraded to "neutral" from "overweight" at JPMorgan.

Dell Technologies (DELL), a computer technology company, released third quarter adjusted EPS of 2.03 dollars, exceeding the consensus, up from 1.75 dollar a year ago on revenue of 23.5 billion dollars, above forecasts, up from 22.9 billion dollars a year earlier.

Autodesk (ADSK), a provider of computer-aided design software, reported third quarter adjusted EPS of 1.04 dollar, just ahead of estimates, up from 0.78 dollar a year ago on revenue of 952.0 million dollars, also above expectations, up from 842.7 million dollars a year earlier.