What actionable trading takeaways can we draw from 2008 for the current week?

As my colleague Joe Perry noted in his Week Ahead report on Friday, traders this week should “expect cases of coronavirus to increase and government interventions to continue.  We’re in the early innings of a long ballgame.”

With markets entering the next phase in the war against the virus, the key factor to watch this week will be the progress of a “big bazooka” fiscal policy bill out of the US. Over the weekend, the much-ballyhooed $1T+ package, failed to pass a procedural vote in the Senate, which is operating at reduced capacity as one US Senator, Rand Paul, has tested positive for coronavirus, causing several Senators who were in close contact with him to self-quarantine. In any event, Senate Democrats and Republicans are scheduled to reconvene midday today to try to hash out their differences, with another vote expected around 1pm ET.

The whole saga is reminiscent of the initial vote on the last major US government fiscal crisis response, the Troubled Asset Repurchase Program (TARP) in late September 2008. Spurred on by early rumblings of the anti-deficit “Tea Party” movement, the first vote on the much-needed bill failed in the House of Representatives on September 29, leading to a 777-point drop in the Dow Jones Industrial Average (DJIA), at its time, the largest ever point drop. Perhaps spooked by the precipitous drop in stocks, the House subsequently passed the bill handily a couple days later on October 3. 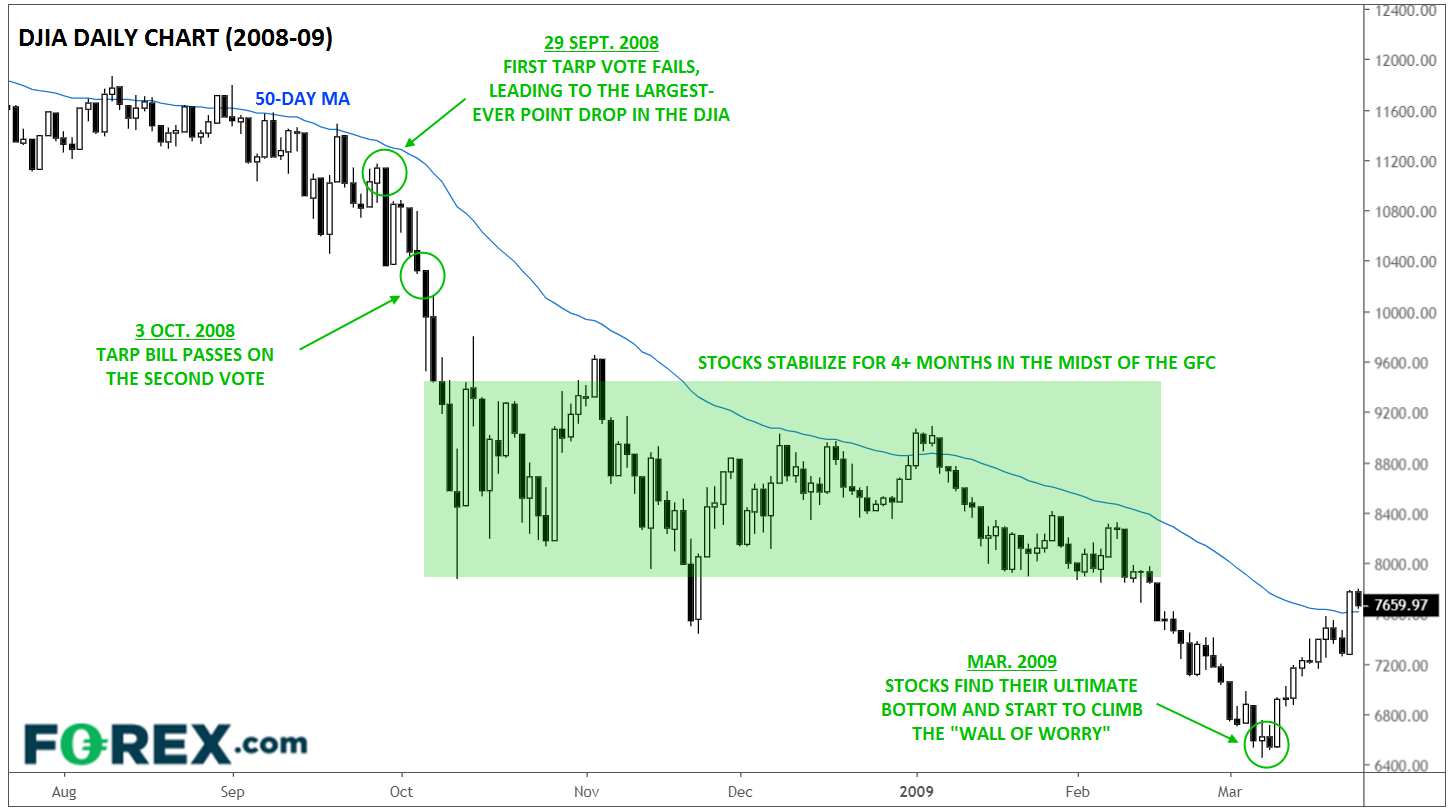 What actionable trading takeaways can we draw from 2008 for the current week?

1.      Many of the same politicians that initially voted against TARP remain in their posts to this day, so hopefully they recall their lessons from that fateful period. We hope it won’t take another failed vote and deep market swoon to get the notoriously divided Congress to reach an agreement for the good of the American people (and stock markets!). With full credit to Winston Churchill, at a minimum, “You can always count on the Americans to do the right thing… after they have tried everything else.”

2.      Even the passage of the much-needed fiscal stimulus bill in 2008 did not prevent the stock market from falling further, though it did at least help stocks stabilize for a period shortly thereafter, followed by one last foray to new lows in Q1 2009.

3.      As we’ve noted before, the stock market WILL bottom before infection and economic data starts to improve, just as it bottomed in early 2009 before housing market and broader activity figures turned higher. Markets always “climb a wall of worry” coming out of panicked periods, with (often years of) skepticism toward the initial bullish move.