After all the talk, OPEC+ to stay the course on supply

If WTI Crude Oil is going to continue to move higher, it must pass through strong resistance near current levels.

With the Delta variant of the coronavirus causing slowdowns in many economies around the world, some were of the opinion that when OPEC+ met today, they would cut back their planned increase of 400,000 bpd that had been decided at the July meeting.  Adding to the nervousness, Russia’s Deputy Prime Minister Novak spoke before the meeting and said that Russia can raise output above OPEC+ quotas.  However, at the 1-hour meeting(!), OPEC+ decided it would be best to stay the course and stick with its original plan of gradual output hikes, which includes the 400,000 bpd increase for October.  OPEC+ plans to meet again on October 4th.

In addition, EIA data earlier today showed that inventories fell by 7.2 million barrels last week vs a draw of 3.1 million barrels expected.  Inventories have been declining most of the summer, except for 2 weeks.

As Novak’s comments hit the wires, WTI crude oil sold off from roughly 69.00 down to a low of 67.29.  However, as the OPEC meeting concluded and it was announced that no changes would be made to the July decision, WTI retraced nearly all  the move: 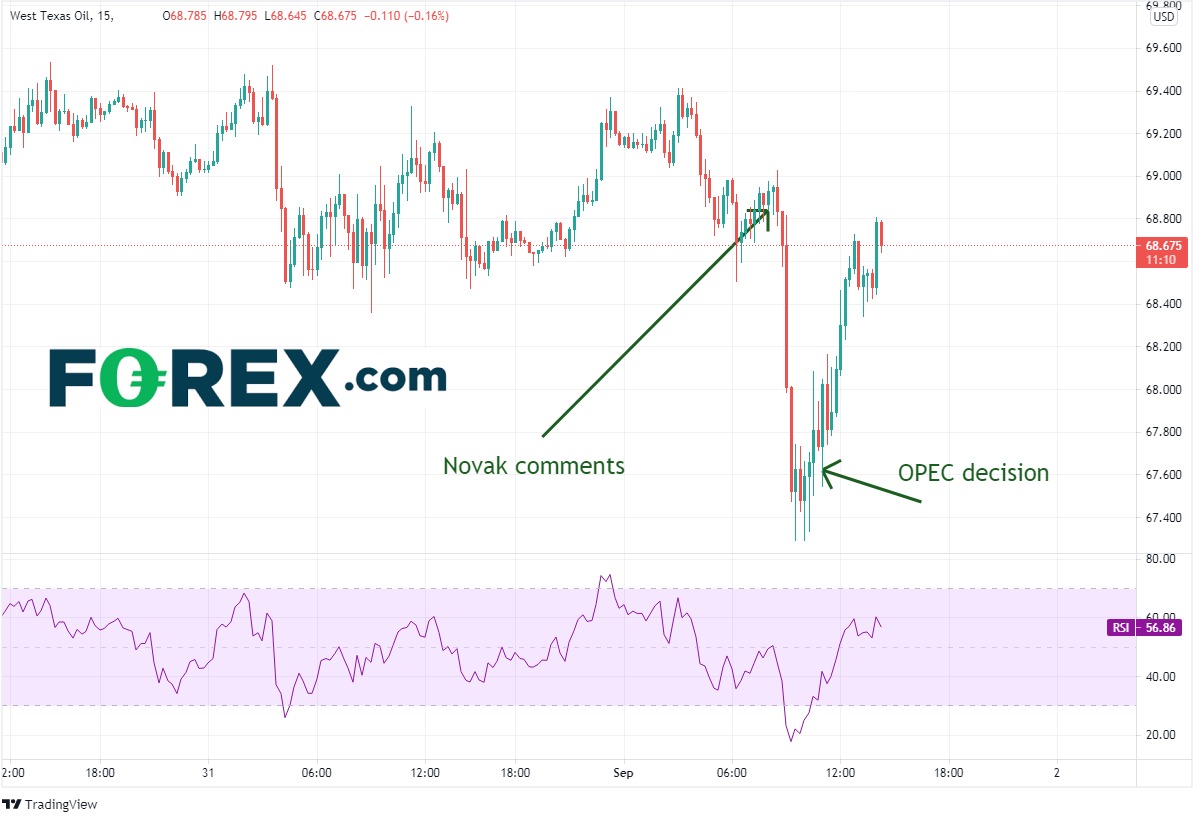 WTI Crude Oil has been moving higher in an upward sloping channel since its April 2020 lows. However, price pulled back when it ran into 2018 high just above 77.  WTI pulled back in what looks like a corrective channel (green) and held at a confluence of support.  This support includes the bottom trendline of the corrective channel, the 200 Day Moving Average, and the 38.2% Fibonacci retracement from the April 2020 lows to the July 6th highs. 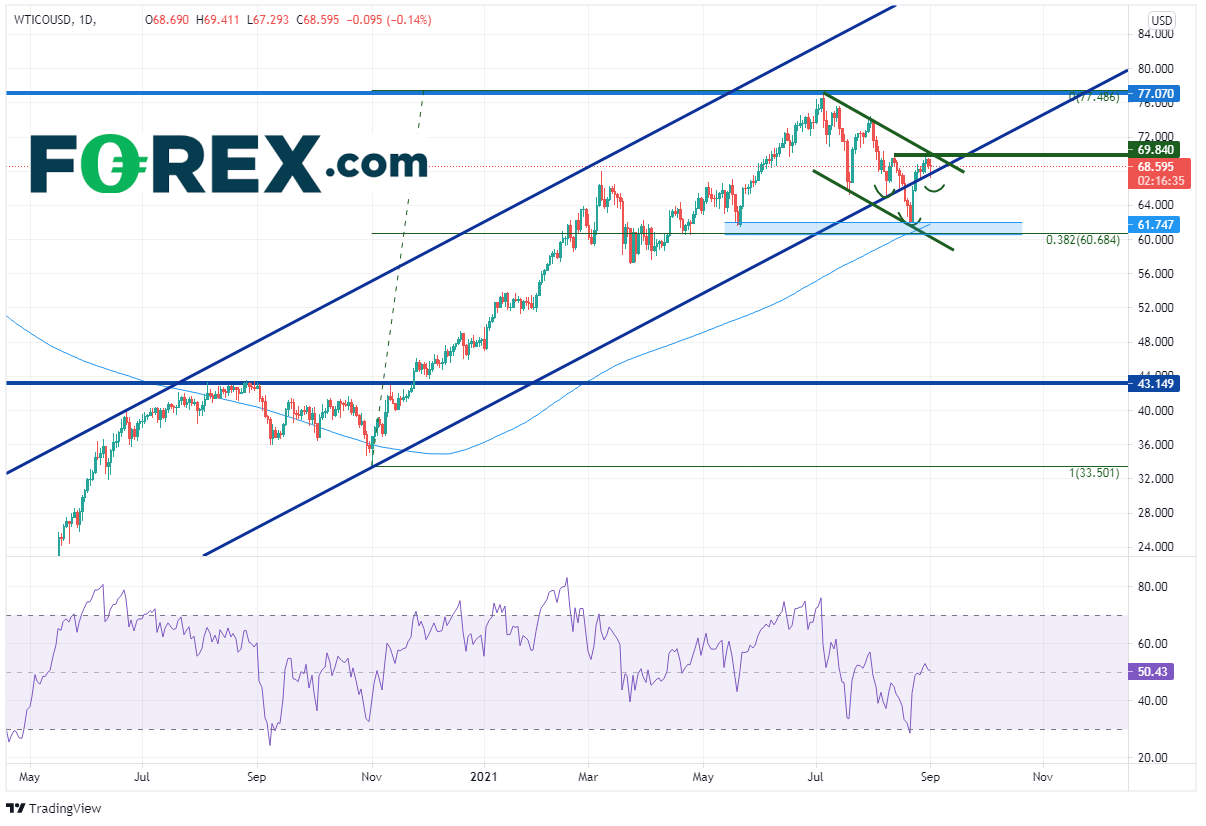 As price bounced from the recent lows, price action may be in the process of forming an inverse Head and Shoulders pattern, stalling at horizontal resistance, the top trendline of the channel,  and the 50% retracement from the July 6th highs to the August 20th lows, near 69.80.  If price breaks above, resistance is at the 61.8% Fibonacci retracement from the same timeframe is 71.25.  Above there, horizontal resistance is at 72.43, with the target of the inverse head and shoulders pattern at the recent July 6th highs.  Support was held today at the bottom trendline of the longer-term upward sloping channel near 67.29.  Below there, price can fall all the way down to horizontal support near 63.87 and then the August 20th lows near 62.43 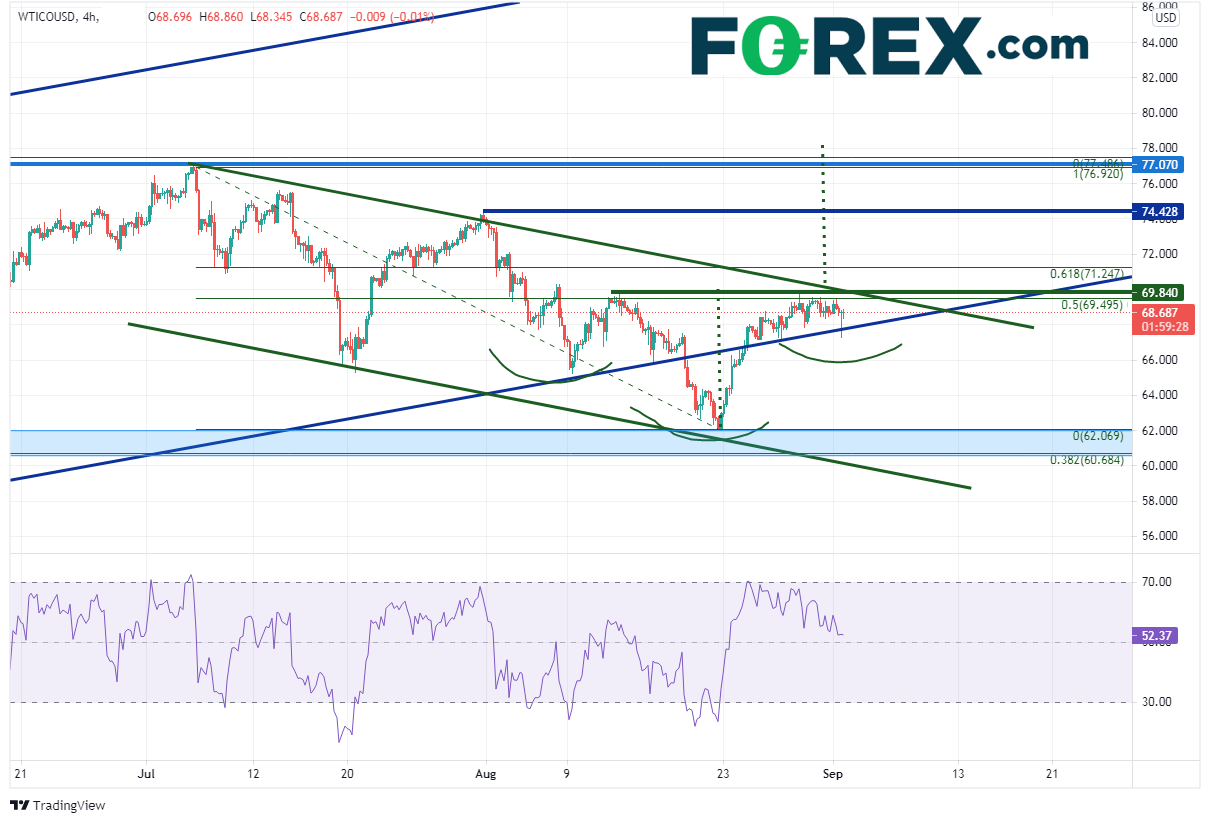 If WTI Crude Oil is going to continue to move higher, it must pass through strong resistance near current levels.  However, don’t look to OPEC+ for any help, as they have decided to stick to the plan of increasing supply by 400,000 bpd.

*Note that near the US close, Novak was on the wires again, saying Russia will return to pre-pandemic output by 2022.  Market reaction was negligible.