The company’s outlook moving forward will be the biggest driver for the stock...

Chinese e-commerce giant Alibaba (BABA) reports its Q4 earnings tomorrow morning before the bell, and no matter how you look at it, the fourth quarter was a big one for the company.

In the last three months of the year, Alibaba raised $13B in a secondary listing in Hong Kong, closed at a fresh record high above $210, and set a new record with $38.4B in sales on Singles Day alone. For Americans tracking at home, that’s more than US consumers spent online on Thanksgiving Day, Black Friday, Cyber Monday, and Amazon Prime Day…combined!

In other words, the company’s outlook was looking bright in Q4, and the market has set correspondingly high expectations heading into tomorrow’s earnings release. According to FactSet, analysts are expecting BABA to report $2.27 in EPS (up from $1.82 in Q4 last year) on $22.7B in revenue (up from $17.5B last year). 54 of the 56 analysts tracked by FactSet have “buy” ratings on the stock, with the other two analysts maintaining “hold” ratings, and an overall price target of $242 over the next 12 months.

While the outlook through Q4 was undoubtedly bright, the biggest question on traders’ minds will be around how the outbreak of coronavirus has impacted consumer demand in China. This information will not be in the backward-looking reported figures, but management’s guidance for the year will give insight into the expected scale of the disruption to consumer demand, manufacturing production, and labor delivery. In other words, the company’s outlook moving forward will be the biggest driver for the stock.

Technically speaking, BABA remains in a clear uptrend, recovering relatively quickly from the nearly 15% late-January swoon to trade back above $220. A strong report, with solid guidance for the year ahead, would likely take the stock to fresh record highs above $231; this would mirror the recent earnings-driven breakouts in massive US technology names like Amazon and Microsoft. On the other hand, a disappointing earnings report and acknowledgement that coronavirus is likely to lead to major disruptions throughout the year could take the stock back down toward the psychologically-significant $200 level, which has served as both resistance and support in recent months. 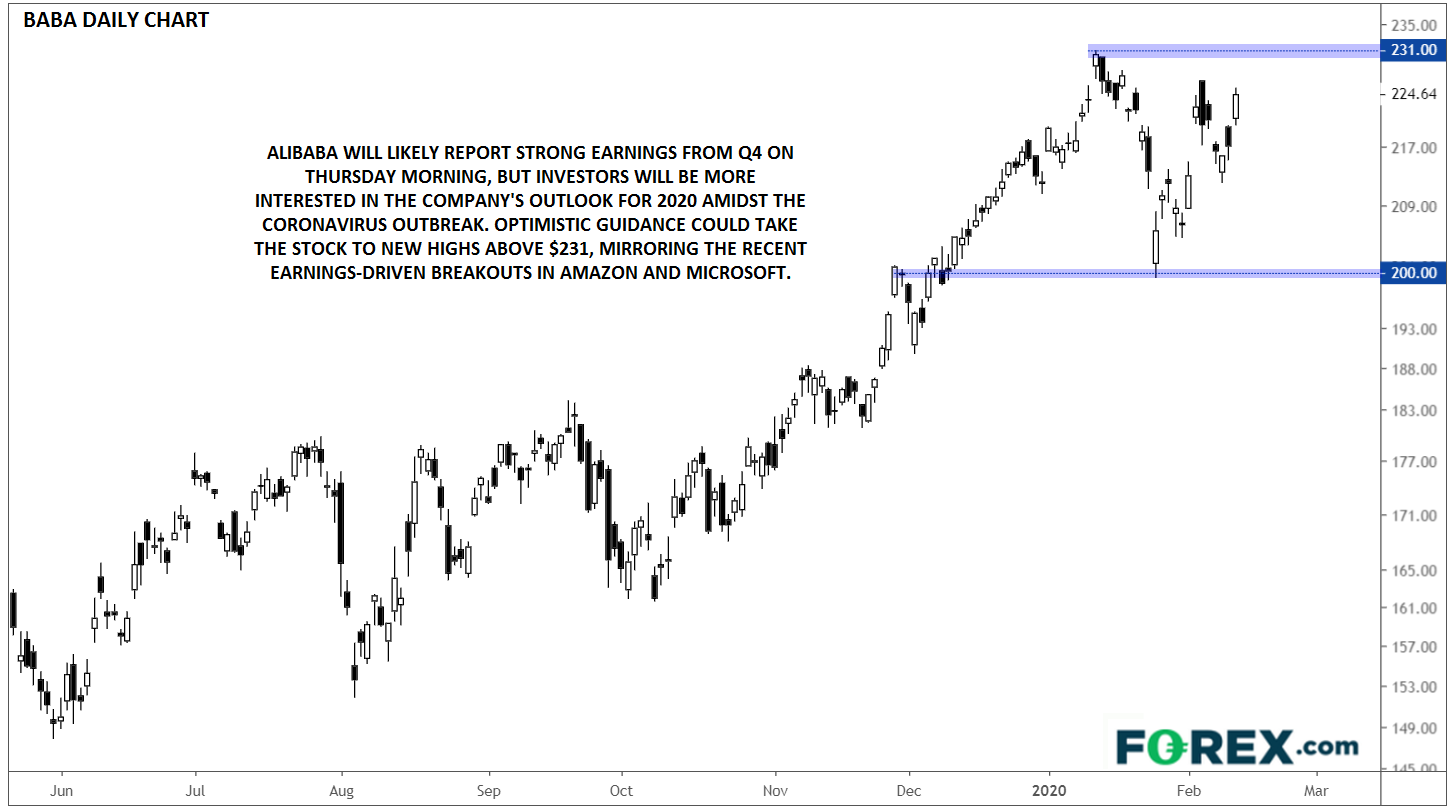