AUD and NZD pairs rallied into the weekly close on Friday as commodities and, in particular copper, pushed aggressively higher.

Commodities chalked up another broad rise last week, with the CRB index (commodities index) rising for a fourth consecutive week and closing at its highest level since November 2018. The index is a basket of 19 commodities ranging from energy, agriculture and metals and is a good barometer for inflationary pressures. And the index has risen by over 30% since the March lows then markets are clearly pricing in inflation.

But it was copper prices which stole the show after its bullish run increased its magnitude and closed above $4 for the first time since August 2011. Gaining an impressive 7.5% last week alone, upside pressures increased due to demand optimism for copper as Chinese investors returned to their desks.

Gold remains unloved after breaking beneath key support at 1764 and producing a bearish engulfing week. However, Friday’s bullish outside candle suggests the potential for a little mean reversion from recent lows, with 1800 being the next obvious target.

The Australian dollar was the strongest major last week, with most of its gains coming through on Friday as copper broke to new highs.  Closing the week at its most bullish level since March 2018 and just shy of 0.8000 one must question at what point the RBA will try and jawbone their currency. Whilst AUD was the strongest, commodity FX in general enjoyed a weaker dollar environment, with CAD, NZD and MXN also pushing firmly higher against the greenback.

The British pound closed above 1.4000 and at its highest level since April 2018. Confidence of a faster vaccine rollout remains a key driver behind the pound’s strength, although any bumps in the road regarding vaccinations are likely to show up in price action too.

Further signs of a weaker dollar emerged on the yen. A bearish hammer has formed on the USD/JPY weekly chart after a failed break above its 50-week eMA, so we question whether the high may already be in place.

GBP/NZD rolls over at its 200-day eMA

A potential bearish swing trade may have formed on GBP/NZD. The weekly chart remains in a longer-term downtrend and produced a bearish pinbar, after Friday’s bearish engulfing candle eradicate all gains seen between Monday and Thursday. A break beneath last week’s low (1.9167) confirms the bearish reversal candle. 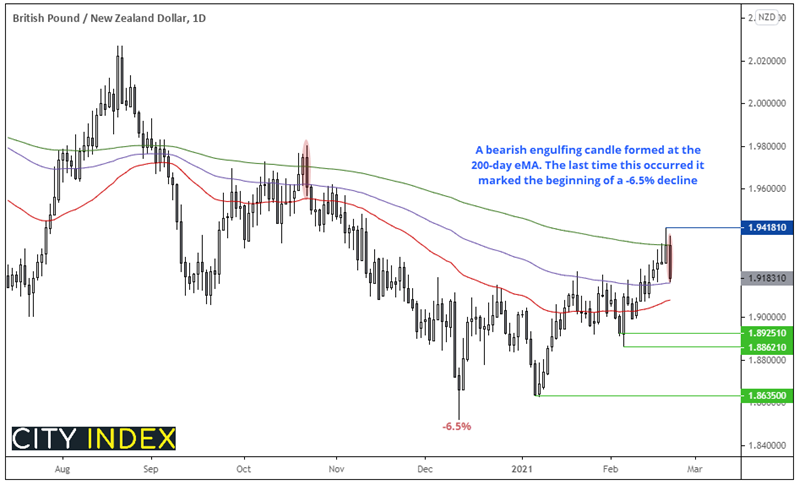 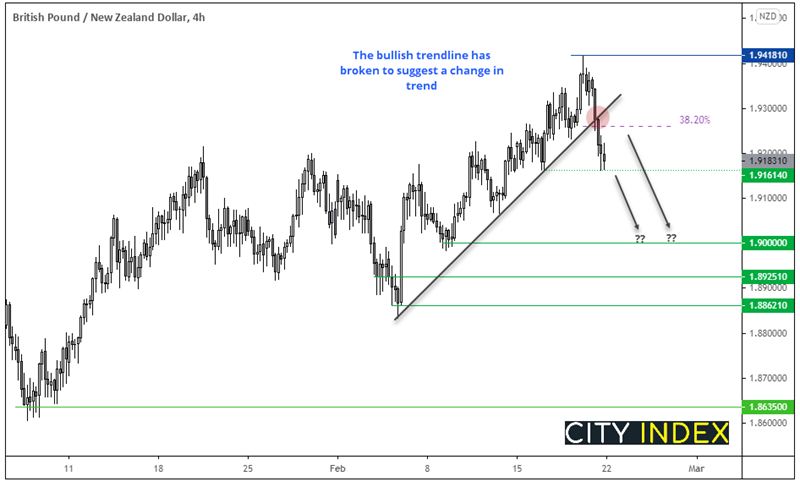 Switching to the four-hour chart shows prices broken below a bullish trendline which suggests a change in trend. Given the decline stopped just above the 1.9160 swing low, we see the potential for a minor rebound from current levels. Yet this may provide an opportunity to fade into the rebound and target lower support levels.

USD/JPY: Removed from watchlist. Prices broken beneath 105.75 to invalidate the original bullish bias.

CHF/JPY: Prices failed to hold above key resistance around 118.60 and produced a weekly bearish pinbar and a bearish engulfing on Friday. The near-term bias remains bearish below Friday’s high and potential targets include 117 and the low around 116.13 – 27.

GBP/CHF: The breakout from its basing pattern has performed well and is already over halfway to hitting its longer-term target around 1.9000. We continue to favour longs upon low volatility retracements or breakouts to new highs. The near-term bias remains bullish above the 1.2490 swing low (H4).