<p>Data-starved traders finally got some much needed morsels to chew on, namely the AU employment report in today’s Asian session and this morning’s BOE “Super Thursday” festivities. Let’s tackle these key releases in order and discuss what they may mean for GBP/AUD, a notoriously volatile currency pair.</p>

Data-starved traders finally got some much needed morsels to chew on, namely the AU employment report in today’s Asian session and this morning’s BOE "Super Thursday" festivities. Let’s tackle these key releases in order and discuss what they may mean for GBP/AUD, a notoriously volatile currency pair.

Though today’s AU jobs report was nowhere near the incredible (literally, some traders did not consider the numbers credible) readings of the last two months, which averaged in excess of 65k jobs per month, it still came in better than anticipated. Today’s report only showed that the AU labor market only shed -1k jobs in December, well below the -11k that economists had been anticipating. Despite today’s dip, employment has been relatively strong Down Under, but the Aussie’s gains have been relatively muted as fears about China’s economy continue to predominate local economic data.

At the diametrically opposite side of the planet, the Bank of England announced its monetary policy "decision" almost exactly 12 hours later. To no one’s surprise, the central bank voted to leave both its interest rates and asset purchase program completely unchanged at 0.5% and £375B per year respectively. In fact, the biggest surprise was that the decision was not quite unanimous in its neutral posture: voter Ian McCafferty dissented from the group’s decision once again, preferring an immediate 25bps increase to the interest rate.

As we noted yesterday, the Bank of England is particularly concerned with a potential Brexit vote, fiscal tightening, soft wage growth and the renewed decline in oil prices, which will keep a lid on price pressures. This has prompted traders to push out their expectations for the BOE’s first interest rate hike since 2007 until sometime in the first half of next year, a big shift from the anticipated timeframe in the first half of this year mere months ago. Today’s BOE announcements have neither strengthened nor weakened that perception, and the pound is trading mixed as a result.

Focusing in on GBP/AUD shows that the volatile pair is trapped between a bit of a bearish rock and a bullish hard place. Supporting the bearish outlook, GBP/AUD has been trending lower within a bearish channel since August, and resistance at the top of the channel is further bolstered by the presence of the downward-trending 50-day moving average. From the bulls’ perspective though, the 38.2% Fibonacci retracement of the entire 2014-2015 rally comes in near 2.0400 and may continue to provide to support in the future, just as it did in December and January.

As long as rates remain within the established bearish channel, we’re inclined to give the downtrend the benefit of the doubt. That said, the longer GBP/AUD holds above support in the low-2.00s, the stronger the bullish case will become. Astute traders should watch for a breakout from the recent 30-55 range in the RSI indicator to potentially lead to a major break, one way or another, in the currency pair itself. 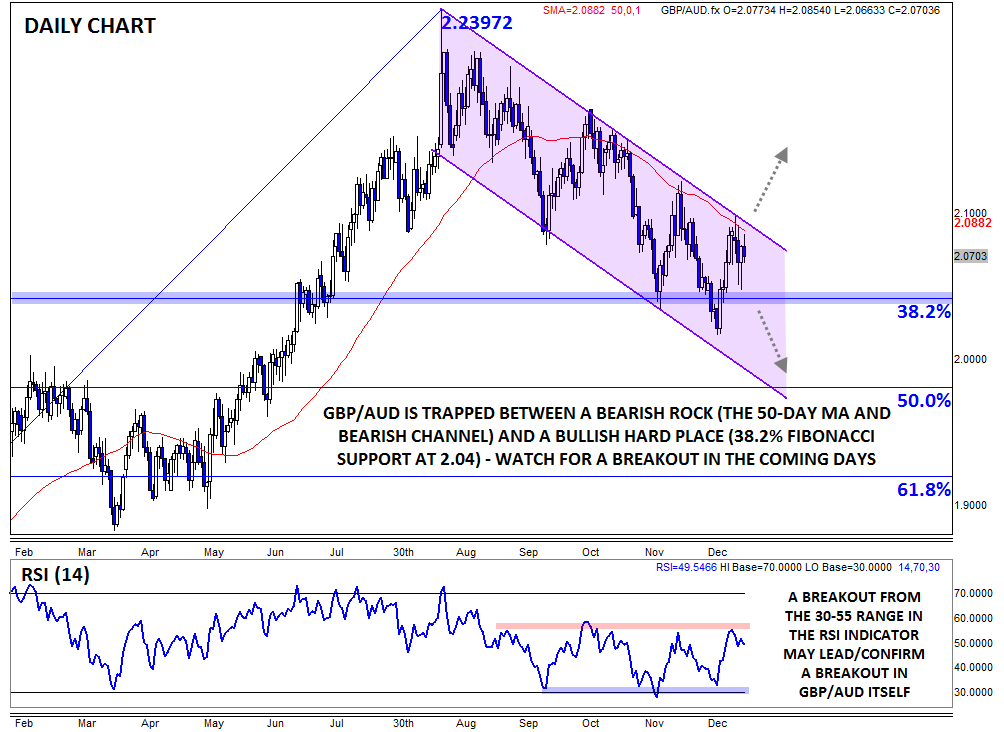