<p>Since the European stock markets closed earlier today, trading has been rather quiet. US markets are shut due to the Martin Luther King bank holiday and understandably this is having a knock-on effect on FX and commodity markets where liquidity and volumes are apparently thinner than usual. The good news is that that volatility should make a quick return due to the sheer number of top-tier economic data this week, starting with some important Chinese figures in about 8 hours’ time, including GDP.</p>

Since the European stock markets closed earlier today, trading has been rather quiet. US markets are shut due to the Martin Luther King bank holiday and understandably this is having a knock-on effect on FX and commodity markets where liquidity and volumes are apparently thinner than usual. The good news is that that volatility should make a quick return due to the sheer number of top-tier economic data this week, starting with some important Chinese figures in about 8 hours’ time, including GDP.

The Australian dollar is among the currencies most vulnerable to the Chinese data and could experience high levels of volatility around the time the data is released at 02:00 GMT. This is because China is Australia’s largest trading partner. Judging by the price action in the AUD/USD and several other Aussie crosses, traders don’t seem to be too confident about the prospects of a stronger-than-expected growth in the Chinese economy. Indeed, with a number of leading indicators consistently disappointing expectations in the final three months of the year, China would have done well if it managed to grow by the expected 6.9%. The key risk therefore is that growth may have actually been weaker. But if correct, growth would be unchanged from the third quarter and only slightly below the official target of 7 per cent. Meanwhile, industrial production is expected to have risen by a slower rate of 6.0% in December, down from 6.2% in November compared to a year ago, while fixed asset investment is likely to have been unchanged at 10.2%. Retail sales are seen rising 11.3% year-over-year.

As my colleague Matt Weller pointed out earlier, the AUD/USD has broken below the key 0.6900 support to hit an almost 7-year low. Unsurprisingly, some of the AUD crosses are likewise looking rather weak – perhaps none more so than the AUD/JPY which has received a double whammy of falling commodity prices and a rise in demand for the safe haven Japanese yen.  Indeed, the AUD/JPY fell for a time below the key 80.00 handle on Friday to hit its lowest level since October 2012.

But in overnight trading, the AUD/JPY managed to stage a bit of a recovery to hit a high of about 81.25. As a well as the psychological level, the AUD/JPY found additional support from the 127.2% Fibonacci extension level of the most recent upswing at 79.65. However, as we go to press, price is again starting to bleed lower after the old support at 81.25 has seemingly turned into stiff resistance. If the selling continues, there is a risk for a bigger drop as there’s not much significant support below the aforementioned 79.65-80.00 range. Thus, if the 79.65-80.00 area breakdowns decisively, the next stop for the AUD/JPY may well be around the support trend of the bearish channel at 77.00-77.50 or the 161.8% Fibonacci extension level around 76.65. Further bearish targets could be at 75.00, the next psychological level, followed by the long-term 61.8% Fibonacci retracement of the 2008-13 upswing at 74.30/5.

As mentioned, the AUD/JPY faces resistance at 81.25. Further resistance levels come in around 82.00/05, which was previously support, followed by last week’s high of around 83.35. A potential break above the latter would be deemed a bullish scenario, especially given the fact that the RSI is currently is a positive state of divergence with price. However, for as long as the AUD/JPY remains entrenched inside its longer term bearish channel, traders may treat any potential rallies as opportunity to get in short at better levels. 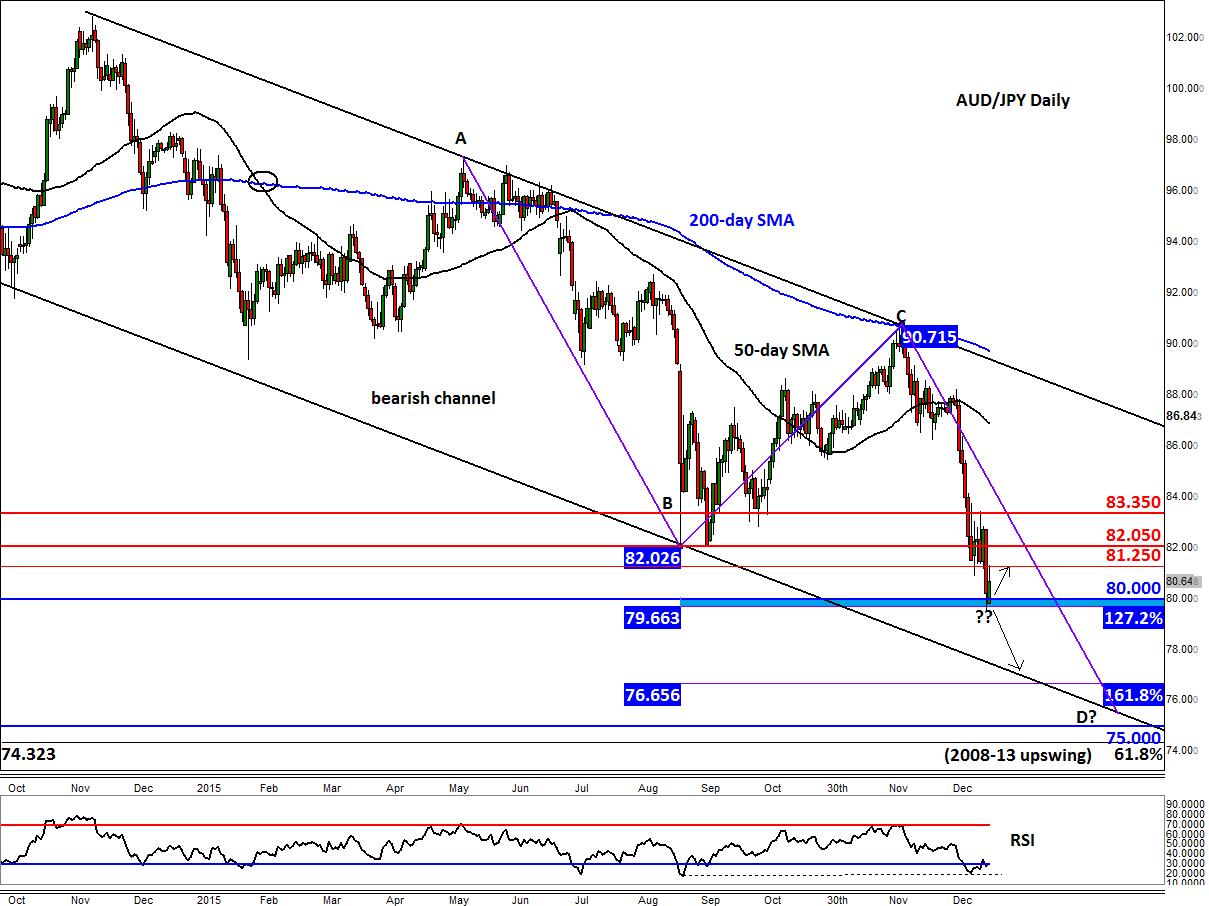