<p>As many may have expected following the release of Australian inflation data last week that came out surprisingly lower-than-expected, the Reserve Bank of Australia (RBA) on Tuesday moved to cut interest rates by 25 basis points to a new record low of 1.75%. Prior to last week’s release of the inflation data, the RBA was not widely expected to cut interest rates, but since the Consumer Price Index showed prices falling by 0.2% vs. expectations of a 0.3% increase, speculation over a potential interest rate cut had increased markedly.</p>

As many may have expected following the release of Australian inflation data last week that came out surprisingly lower-than-expected, the Reserve Bank of Australia (RBA) on Tuesday moved to cut interest rates by 25 basis points to a new record low of 1.75%. Prior to last week’s release of the inflation data, the RBA was not widely expected to cut interest rates, but since the Consumer Price Index showed prices falling by 0.2% vs. expectations of a 0.3% increase, speculation over a potential interest rate cut had increased markedly.

The RBA move on Tuesday occurs in stark contrast to the policy decisions of other major central banks last week that also had varying expectations of possible rate cuts, including both the Bank of Japan (BoJ) and the Reserve Bank of New Zealand (RBNZ). There was some prior speculation over potential further easing by the RBNZ, and certainly much anticipation that the BoJ would act with additional stimulus measures in attempts to halt the strengthening of the Japanese yen. In the end, however, both of these central banks opted to keep interest rates unchanged last week.

This contrast, especially in light of the unexpected disinflationary readings out of Australia last week, has led to a sharp drop in the Australian dollar against other major currencies, as might have been expected. For AUD/USD, the RBA rate cut has pressured the currency pair down to a major support target at 0.7500. In the process of this drop, price has also tentatively broken down below both its 50-day moving average and an uptrend line extending back to January’s multi-year lows near 0.6800.

In the event of a further sustained breakdown below the noted 0.7500 support, which would extend the recent two-week retreat from April’s 10-month high above 0.7800, the next major downside targets are at the key 0.7350 and 0.7200 support levels. 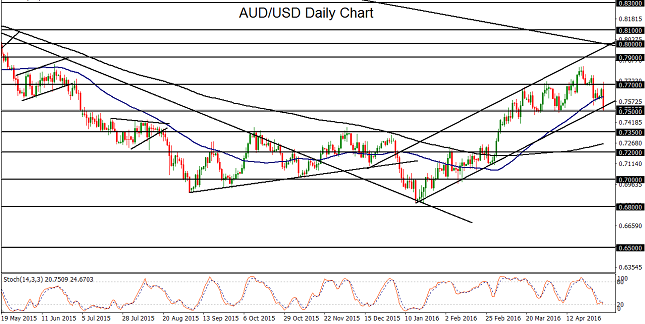