<p>After dropping below key support around 0.7350 on Monday, AUD/USD bounced back slightly above that level on Tuesday, helped along by a modest rebound in key commodities including gold. However, overall pressure on the currency pair remains, in light of recent economic and central bank developments that have significantly dimmed the prospects for the Australian dollar.</p>

After dropping below key support around 0.7350 on Monday, AUD/USD bounced back slightly above that level on Tuesday, helped along by a modest rebound in key commodities including gold. However, overall pressure on the currency pair remains, in light of recent economic and central bank developments that have significantly dimmed the prospects for the Australian dollar.

Following the release of Australian inflation data two weeks ago that came out surprisingly lower-than-expected, the Reserve Bank of Australia (RBA) cut interest rates last week by 25 basis points to a new record low of 1.75%. Prior to the release of the inflation data, the RBA was not widely expected to cut interest rates, but since the Australian Consumer Price Index surprisingly showed prices falling by 0.2% vs. expectations of a 0.3% increase, speculation over a potential interest rate cut had increased substantially.

After last Tuesday’s actual rate cut, the RBA followed up this past Friday with more dovish news during its monetary policy statement. The central bank cut its core inflation forecast to 1-2% for 2016, down from 2-3% in its prior quarterly statement. This provided a solid hint of further rate cuts potentially to come.

In light of these recent inflation-driven events contributing to further RBA dovishness, the Australian dollar has fallen significantly against other major currencies, as might have been expected. The latest culmination of this pressure has prompted AUD/USD to fall below the noted 0.7350 support level and establish a two-month low around 0.7300 thus far this week. This low follows the currency pair’s drop below key 0.7500 support earlier last week in the wake of the RBA rate cut.

During the course of AUD/USD’s sharp decline within the past three weeks from April’s 0.7833 high, price has also broken down below both its 50-day moving average and an uptrend channel extending back to January’s multi-year lows near 0.6800. In the event of further follow-through under the noted 0.7350 level with a breakdown below the nearby 200-day moving average, the next major bearish target is at the key 0.7200 support level followed by the 0.7000 psychological level. 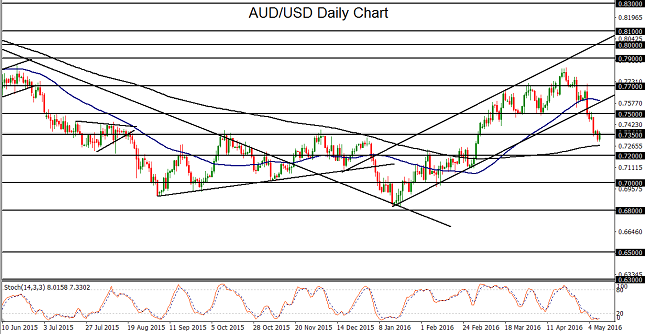