AUD/USD’s indecisiveness could lead to a sharp move

<p>A surprising decision by the Reserve Bank of Australia to cut interest rates and a more hawkish-than-expected Federal Reserve meeting minutes has weighed heavily on the AUD/USD in recent times. The commodity currency has come under further pressure from renewed concerns about Australia’s largest trading partner, China. Incoming data from the world’s second largest economy over the past couple of weeks have been poor, raising concerns about the level of demand for Australia’s key commodity exports such as Iron ore. Other base and precious metals have also weakened with copper, gold and silver all retreating. As well as Chinese demand concerns, these buck-denominated metals have been pressurised by a rallying US dollar.</p>

A surprising decision by the Reserve Bank of Australia to cut interest rates and a more hawkish-than-expected Federal Reserve meeting minutes has weighed heavily on the AUD/USD in recent times. The commodity currency has come under further pressure from renewed concerns about Australia’s largest trading partner, China. Incoming data from the world’s second largest economy over the past couple of weeks have been poor, raising concerns about the level of demand for Australia’s key commodity exports such as Iron ore. Other base and precious metals have also weakened with copper, gold and silver all retreating. As well as Chinese demand concerns, these buck-denominated metals have been pressurised by a rallying US dollar.

But most of these developments are probably priced in now. Apart from a couple of speeches from the Reserve Bank of Australia official this week, there is not much in the way of key Australian data this week, although with a couple of exceptions. The RBA’s Governor Glenn Stevens is due to speak at the Trans-Tasman Business Circle briefing, in Sydney on Tuesday, while Assistant Governor Guy Debelle will be speaking in New York on Thursday. In terms of data, the Australian Bureau of Statistics will release the quarterly construction work report on Wednesday, followed by the private capital expenditure data on Thursday. From the US, this week’s key data include durable goods orders, unemployment claims and pending home sales, all due on Thursday, followed by preliminary second quarter GDP on Friday. Today’s data showed the manufacturing PMI in May eased to its lowest level since 2009. At 50.5, it was barely above the expansion threshold of 50, raising question marks about the prospects of a June rate hike.

From a technical point of view, the AUD/USD formed a couple of doji candles in as many days at the end of last week following an aggressive move to the downside on Wednesday in the aftermath of the hawkish Fed minutes. The Aussie was displaying another such candlestick formation at the time of this writing. The doji formations point to indecision and suggests no one is quite sure what the short-term trend is.

Clearly, price will soon make its next move depending on where the marginal increase in the pressure will come from: the buyers or the sellers. Given the recent sharp drop, and with price trading around the 200-day moving average and the 61.8% Fibonacci retracement against the most recent rally, there is a good chance that we may see some short-side profit-taking here. This alone could provide some relief for the Aussie, potentially leading to a bounce. That’s assuming that the bounce has not already come to pass today. The alternative scenario is even more compelling. If price fails to bounce from such an important support area, then surely it will need to go down a lot further before it becomes attractive once again for the buyers to step back in.

So, a sharp move in one or the other direction looks imminent. Conservative traders may therefore wish to keep this pair in their watch lists for now and wait for price to either break below last week’s low at around 0.7175 or move above the key short-term resistance and the flattening 200-day moving average around the 0.7250/5 area. In the bullish scenario, the next logical levels to watch for potential resistance are the prior hurdles at 0.7325 followed by 0.7380. In the bearish scenario, there are not many prior reference points until 0.6900, so the 78.6% Fibonacci retracement at 0.7045/50 could be a realistic short-term target. 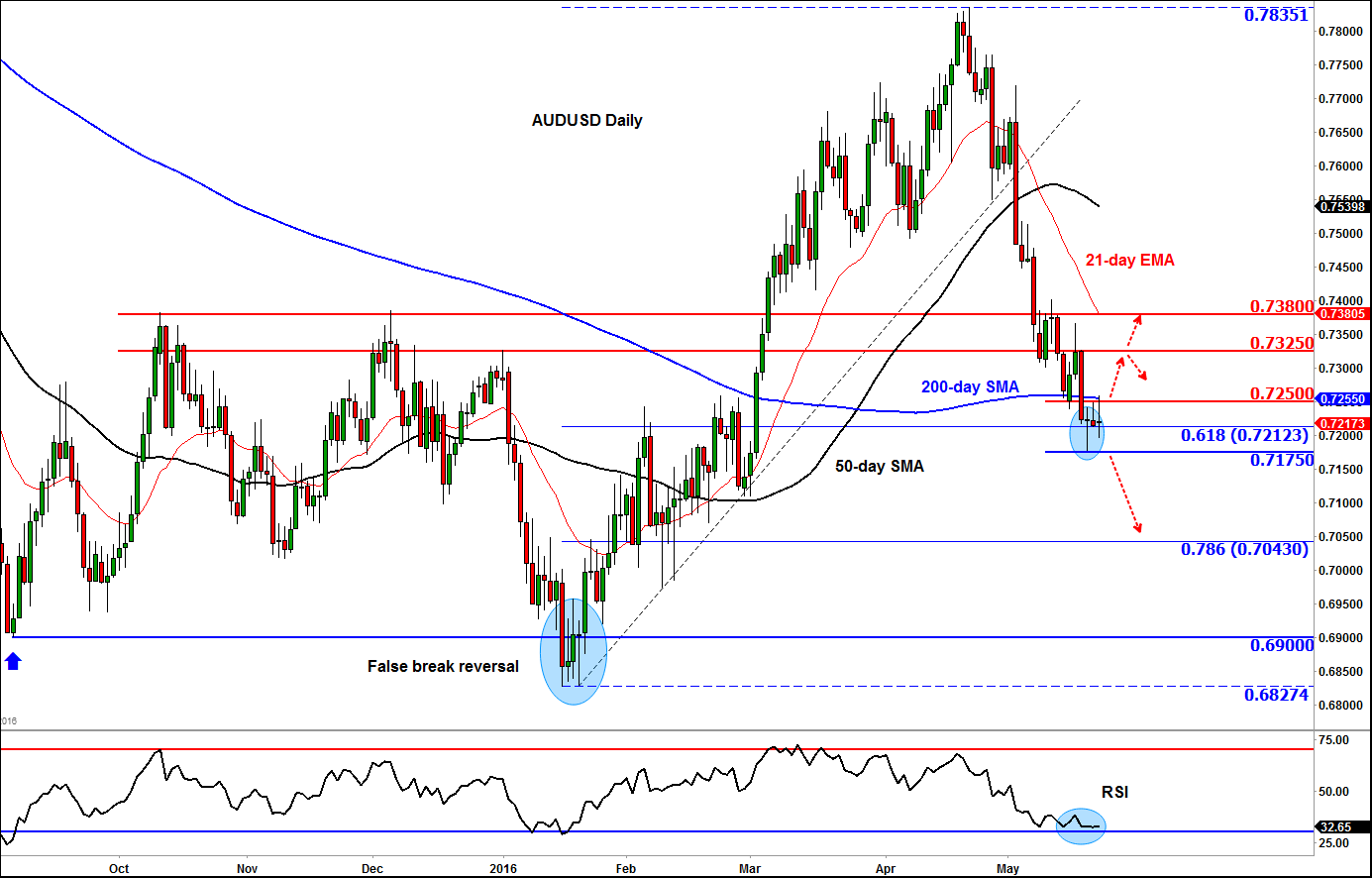