AUDNZD breaks down ahead of key NZ data and RBNZ

The focus of the FX markets will start to turn to the New Zealand dollar.

The FX markets were relatively calm today. All eyes were on Wall Street as investors tried to gauge the appetite for risk as the indices bounced around key levels after their significant falls the day before. Overall, there is still a sense of nervousness in the markets and this is keeping risk-sensitive currencies such as the Japanese yen, in demand. But tonight, the focus of the FX markets will start to turn to the New Zealand dollar. At 21:45 GMT, we will have the latest employment figures. The data should send the kiwi sharply in one or the other direction. NZ employment is expected to have risen by just 0.4% in the fourth quarter of 2017 after rising by an above-forecast 2.2% in Q3. The unemployment rate is seen rising to 4.7% from 4.6% previously. We think that these figures might be too pessimistic, so the possibility for a positive surprise is high in our view. If the figures do come out ahead of expectations then the NZD could rally. But any gains or losses for the kiwi in response to the employment data are likely to be short-lived, for the focus will quickly shift to the Reserve Bank of New Zealand’s policy decision, which takes place on Wednesday evening or Thursday morning NZ time. The RBNZ is widely expected to hold interest rates steady at 1.75% for the ninth consecutive time. But the NZD should move nonetheless in the event the central bank comes across as being more hawkish or dovish than expected.

Ahead of the NZ employment figures and the RBNZ rate decision, the New Zealand dollar was holding its own rather well with the NZD/USD being higher on the week. However, I want to take the US dollar out of the equation as I am not really sure about the trend at the moment. So, among the NZD crosses, the AUD/NZD looks the most interesting from a technical perspective. The AUD/NZD is currently down for the fourth consecutive month, which therefore means it is also down for the year so far. In fact, it has spent the past four years in a rather tight consolidative range, unable to break the long-term downtrend. So, the bias is bearish both on a short-term and long-term basis. That outlook could change in the event price turns positive on the year by going north of 1.10 handle. But there are several resistance levels standing on the way, including at 1.10835/40 area, which is the base of latest breakdown and corresponds with the 200-day moving average. If the sellers are to remain in control, they will need to hold their ground here. Support meanwhile could come in around the Fibonacci retracement levels at 1.0720 (61.8%) or at 1.0570 (78.6%), or perhaps at the long-term bullish trend line around the 1.05 handle. Given that the bias is currently bearish, these levels should be seen as bearish objectives rather than entry levels for the bulls. 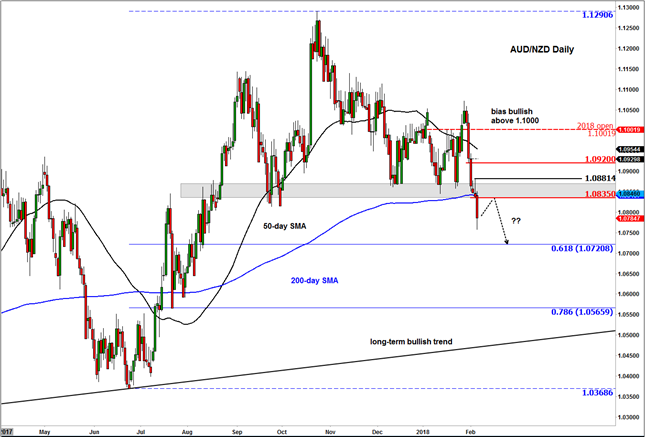