AUD/NZD in focus ahead of RBA

The Reserve Bank of Australia is unlikely to change interest rates tonight from the current historic low rate of 1.5 per cent. But it may become the latest central bank to turn hawkish following three months of stronger-than-expected jobs growth in Australia, improvement in Chinese economy and stable financial conditions around the world.

The Reserve Bank of Australia is unlikely to change interest rates tonight from the current historic low rate of 1.5 per cent. But it may become the latest central bank to turn hawkish following three months of stronger-than-expected jobs growth in Australia, improvement in Chinese economy and stable financial conditions around the world. If the RBA does turn hawkish then the AUD/USD may become the latest dollar pair to break out of its long-term consolidation range to the upside, as we pointed out the possibility on Friday.

However, those who prefer not to focus on the US dollar ahead of the July 4 holiday and Friday’s nonfarm payrolls report, may wish to look at an Aussie cross instead. The AUD/NZD is one example. This pair had been falling sharply since mid-March as the New Zealand dollar firmed up on the back of a hawkish RBNZ and improvement in New Zealand data. However, it looks like this pair has put in a short-term bottom around the technically important 1.0380/5 level.

As can be seen from the chart, this 1.0380/5 level was the last resistance prior to the breakout back in early February. Once resistance, it has turned into support. So far however we haven’t seen a break above the most recent high at 1.0535/50 area. If and when price moves above here, would then we would have our first higher high and thus a break in market structure. Once this condition is met then we can expect to see higher levels on AUD/NZD.

But if the 1.0380/5 support breaks first then all bets would be off. In this case, we wouldn’t be surprised if the AUD/NZD eventually drops to parity. 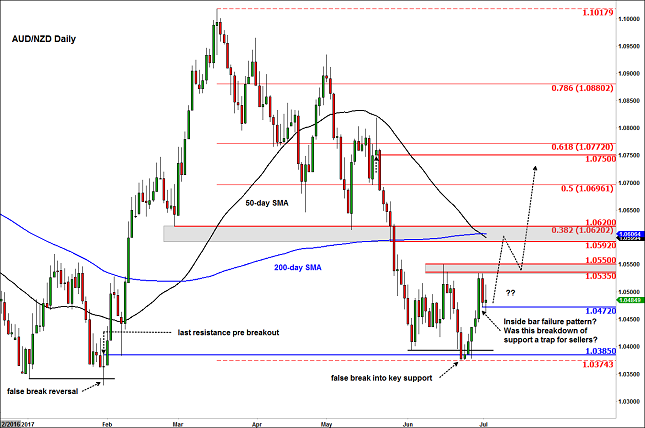