This is one of the reasons why I am writing about the AUD/NZD today. More to the point, there’s important data scheduled from both Australia and New Zealand overnight, which should move their respective currencies provided the figures deviate from expectations by noticeable margins. From New Zeeland, we have the fourth quarter GDP data at 21:45 GMT on Wednesday (Thursday morning NZ time); the economy is expected to have grown by 0.7% in the fourth quarter of 2016, a weaker pace than 1.1% in Q3. From Australia, the monthly employment figures will be released at 00:30 GMT on Thursday. Aussie employment is expected to have risen by 16,300 in February, while the unemployment rate is seen steady at 5.7%.

The AUD/NZD could therefore move relatively sharply tonight in reaction to the data from Australia and New Zealand. However, it is not totally immune to the Fed rate decision. Let’s say the Fed raises interest rates but accompanies it with a dovish statement. In this case, the AUD may rise faster against the USD than the NZD, because the former has been relatively stronger of late. Thus, the AUD/NZD may actually rise slightly if the Fed is deemed to be dovish.

But form a purely technical point of view, the AUD/NZD is clearly in an uptrend. The moving averages on the chart are in an ascending order, objectively telling us that the trend is indeed bullish. The recent break above the key 1.0740-70 range confirms this view. But the cross has now reached the first of our previously noted bullish objectives at 1.0915 (the 61.8% Fibonacci retracement level) and resistance at 1.0945. Thus it may retreat slightly before heading towards the next bullish objective at 1.1030-1.1100 area (previous support and 78.6% Fibonacci level). The short-term support to watch is at around 1.0860-75. If this area breaks then we may see a more significant drop to that key 1.0740-70 range before it potentially starts its next up leg. In any event, we are bullish until the chart tells us otherwise. 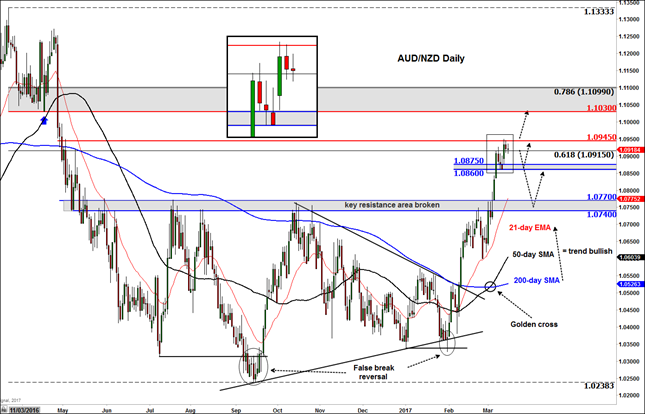