The talks are picking up pace ahead of Trump’s March 1 deadline for more than doubling tariffs on $200B of Chinese imports, though the President has recently suggested that he could postpone that decision for another 60 days if he’s satisfied with this week’s progress.

Ultimately, it will almost certainly take another summit between Presidents Trump and Xi to reach an official deal, and the earliest they could realistically meet at this point would be the middle of March. That said, the extension of last week’s talks and ongoing dialogue this week has traders expecting the increase in tariffs will be delayed by the end of next week, with some sort of agreement following in either late March or early April. Of course, markets have been wrongfooted by political developments countless times in recent quarters, so traders will remain glued to their monitors for headlines out of Washington in the coming days.

For more on the US-China trade talks and their impact on the global stock / commodity markets, see my colleague Fawad Razaqzada’s report “Sentiment dominated by US-China trade and dovish central banks” from earlier today. When it comes to FX, AUD/USD is one of the best pairs to watch to gauge sentiment toward global trade. After a swooning on dovish RBA comments earlier this month, rates stabilized near previous support in the 0.7050 area.

The pair has rallied 100 pips since then, and with the MACD indicator about to cross back into a bullish configuration, the rally may have further to run on positive trade headlines. Adding to the bullish evidence, AUD/USD is showing a bullish engulfing candle so far today, signaling a shift toward bullish momentum. A formal delay to the tariff deadline and an official summit between the US and China could boost the pair toward the year-to-date highs around 0.7300 next. 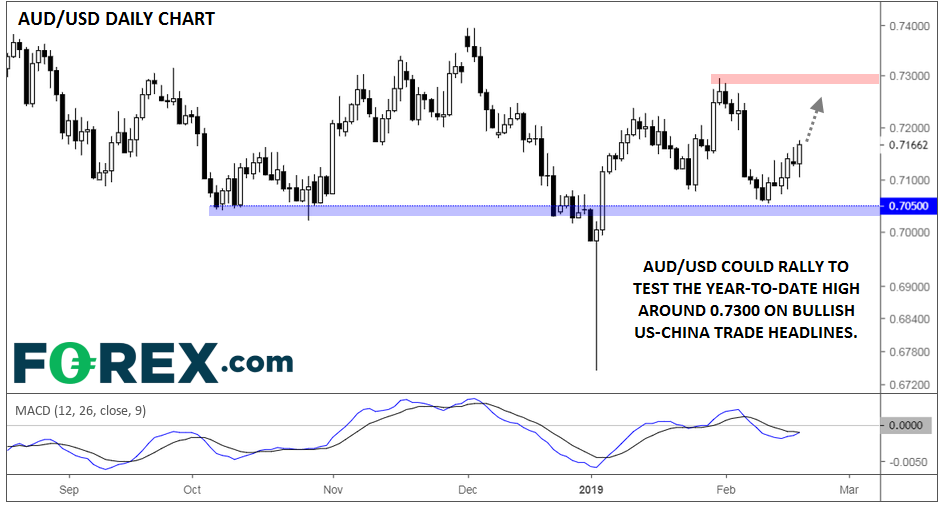