AUD/USD Could Target 0.7000 if the RBA Strikes an Optimistic Tone

The stage is set for a continued rally in AUD/USD

After two of the biggest weeks for macroeconomic releases (not to mention most of the top-tier earnings reports), this week’s calendar is comparatively subdued. That said, there are still some key events to keep an eye on, including tonight’s confab at the Reserve Bank of Australia (RBA).

According to the ASX’s RBA Rate Indicator tool, the odds of the central bank remaining on hold tonight are 93% with the remaining 7% of the market betting on an interest rate cut. Since the RBA’s last meeting, Australia’s unemployment rate has dropped 0.1% to 5.2% and inflation has ticked up 0.1% to 1.7% (though this is still below the central bank’s 2-3% target range).  As of writing, traders are pricing in about a 1-in-4 chance of an interest rate cut by the central bank’s December meeting, so the release could still move markets if the tone of the monetary policy statement and the RBA’s outlook for the economy shift those odds meaningfully.

Of course, the progress of US-China trade talks is a big question market for both the RBA and Australian dollar traders. With the recent positive comments and likelihood of a “Phase One” trade deal this month, the Aussie has rallied out of a two-year bearish channel to hit its highest level in more than three months. 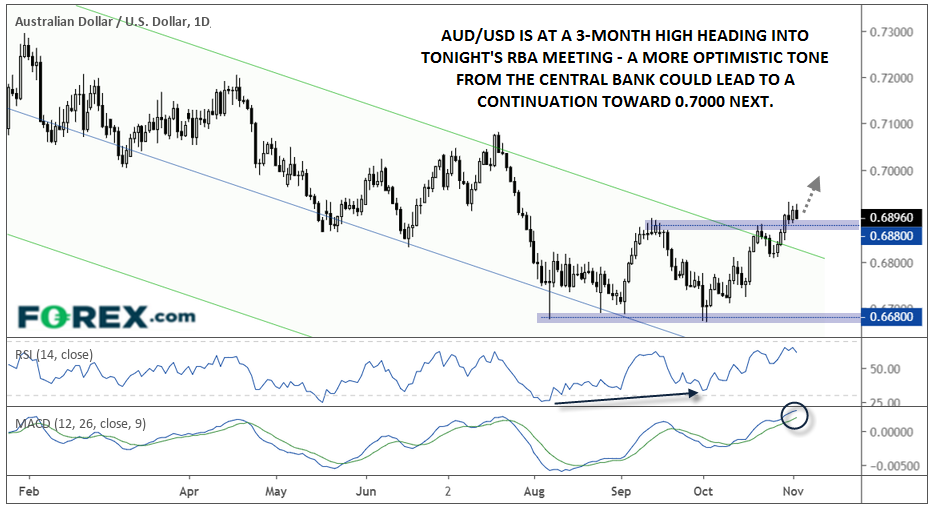 With the MACD indicator trending higher above both its signal line and the “0” level and the RSI recently showing a bullish divergence, the stage is set for a continued rally in AUD/USD. More optimistic comments from the RBA could take the pair toward key psychological resistance at 0.7000. On the other hand, a break back below previous resistance in the 0.6880 area (perhaps on the back of a more cautious RBA statement) would erase the pair’s near-term bullish bias.