The US dollar is up for the second consecutive week against a basket of foreign currencies, owing to decent macro data from the world’s largest economy and progress on the tax reform bill.

The US dollar is up for the second consecutive week against a basket of foreign currencies, owing to decent macro data from the world’s largest economy and progress on the tax reform bill. The greenback had already been rising sharply against the likes of the Australian and New Zealand dollars, but now it has also managed to catch a bid against the likes of the Canadian dollar, Japanese yen, British pound, Swiss franc and the euro. The dollar’s mini revival has weighed heavily on both precious and base metal prices, while buck-denominated crude oil has also suffered, albeit to a lesser degree. So, as we approach year-end, is the dollar finally about to make a more meaningful comeback? While that may be the case, Friday’s US jobs report is the key risk event which could derail the rally in the event the data comes out significantly weaker than expected. It is also possible that there may be more delays in passing the tax reforms.

If the US dollar were to fall back then the AUD/USD may finally catch a bid after its spectacular drop since September. The AUD/USD was actually testing a key long-term support area around the 0.7500-0.7515 area. As can be seen, this is where the long-term bullish trend line converges with previous resistance. While a bounce is possible here, we wouldn’t call it a bottom until there is a clear break in market structure of short-term lower lows and lower highs. Still, given the long-term rising trend of higher lows and higher highs, we would be watching for a potential sign of reversal to emerge here. Short-term resistance comes in around 0.7555 – a daily close above this level may well be the bullish trigger that we are waiting for. All bets would be off, however, if the long-term bullish trend breaks down first. 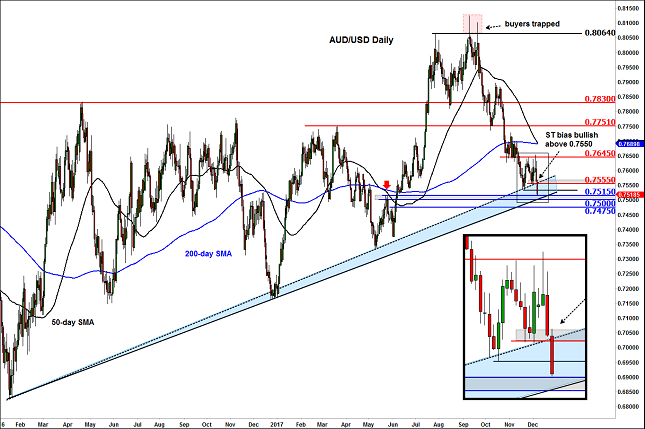