If the FOMC minutes convey a dovish message, bear in mind that this may already be priced in. However, should they reveal a significantly more dovish message than what Mr Powell and co have since portrayed, then we could see a more pronounced drop in bond yields and the dollar.

At the time of writing, the US dollar is in consolidation mode ahead of the release of the FOMC meeting minutes at 19:00 GMT (14:00 ET) today. After the Fed’s last meeting in late January, we have heard from Chairman Jay Powell and a few other FOMC members, all suggesting that US interest rates are likely to remain unchanged for a while, and that the next move is dependent on incoming data. So, if the FOMC minutes convey a dovish message, bear in mind that this may already be priced in. However, should they reveal a significantly more dovish message than what Mr Powell and co have since portrayed, then we could see a more pronounced drop in bond yields and the dollar.

So far, the dollar has held its own relatively well despite the Fed’s U-turn. Part of the reason why the greenback has remained supported can be explained away by weakness in global data and dovish central banks elsewhere, keeping foreign currencies undermined. Indeed, the fact that some of the other major central banks have also turned slightly more dovish recently is why bond yields have fallen, supporting equities and non-interest bearish assets such as gold and silver. Other metal prices such as copper, platinum and especially palladium have all rallied, too. The firmer metal prices have provided additional support for the positively-correlating Australian dollar.

One interesting pair to watch for short-term volatility is the AUD/USD. As my colleague Matt Weller reported yesterday, the technical outlook on the Aussie is looking positive for now thanks in part to growing optimism over a US-China trade resolution. This pair will obviously be impacted by the release of today’s FOMC minutes – not to mention the direction of metal and equity prices (both rising at the moment). But we will also have the latest Australian employment data to look forward to in the early hours of Thursday, which could provide sharper short-term direction for the Aussie. The consensus expectations among surveyed economists point to a +15,200 print on the headline jobs figure with the unemployment rate seen remaining unchanged at 5.0 percent. The Australian employment report has beaten expectations in four out of the past five occasions. The degree to which the Aussie dollar will respond to the employment report will depend on the magnitude of the surprise. But should market conditions remain positive (i.e. metals and stocks rising), then any weakness related to the domestic jobs data could be short-lived for the Aussie.

More fundamental events for AUD/USD later in the week

The AUD/USD and other dollar pairs will remain in focus for the rest of the week. Thursday will see the release of some second-tier US data, including durable goods orders, Philly Fed Manufacturing Index and Existing Home Sales. RBA Governor Philip Lowe is due to testify in Sydney late in the day on Thursday (early Friday in Australia). The week will conclude with speeches from various central bank officials including Fed’s Williams, Clarida, Bullard and Quarles, all on Friday. 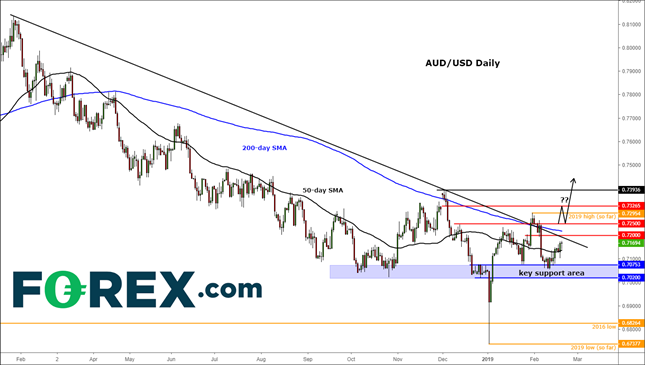