AUD/USD may be Ready It’s Next Move!

If the RBA remains dovish and if stocks move lower, AUD/USD may head lower as well.

The RBA meets tomorrow.  It should be a quiet event for the markets, with the Committee remaining dovish.  At their last meeting in April, they left rates unchanged after lowering them to near 0% while maintaining QE, in line with other major global central banks.  Therefore, traders will be more interested in how well the Committee perceives QE to be helping stimulate the economy and their projections moving forward.  On April 21st,  RBA Governor Lowe said he expected the unemployment rate to be around 10% by June.  In addition to the RBA meeting on Tuesday, the Bank will release the RBA Statement on Monetary Policy on Friday.

If the RBA continues their dovish stance tomorrow,  the Australian Dollar is at an ideal spot to move lower. As we had discussed last week, the AUD/USD has a strong correlation with the S&P 500.  And with the S&P 500 moving lower into the end of last week, it shouldn’t be much of a surprise that the pair moved lower on Thursday and Friday as well.  Notice how the S&P 500 (green line below) and the AUD/USD have been moving together since late February! 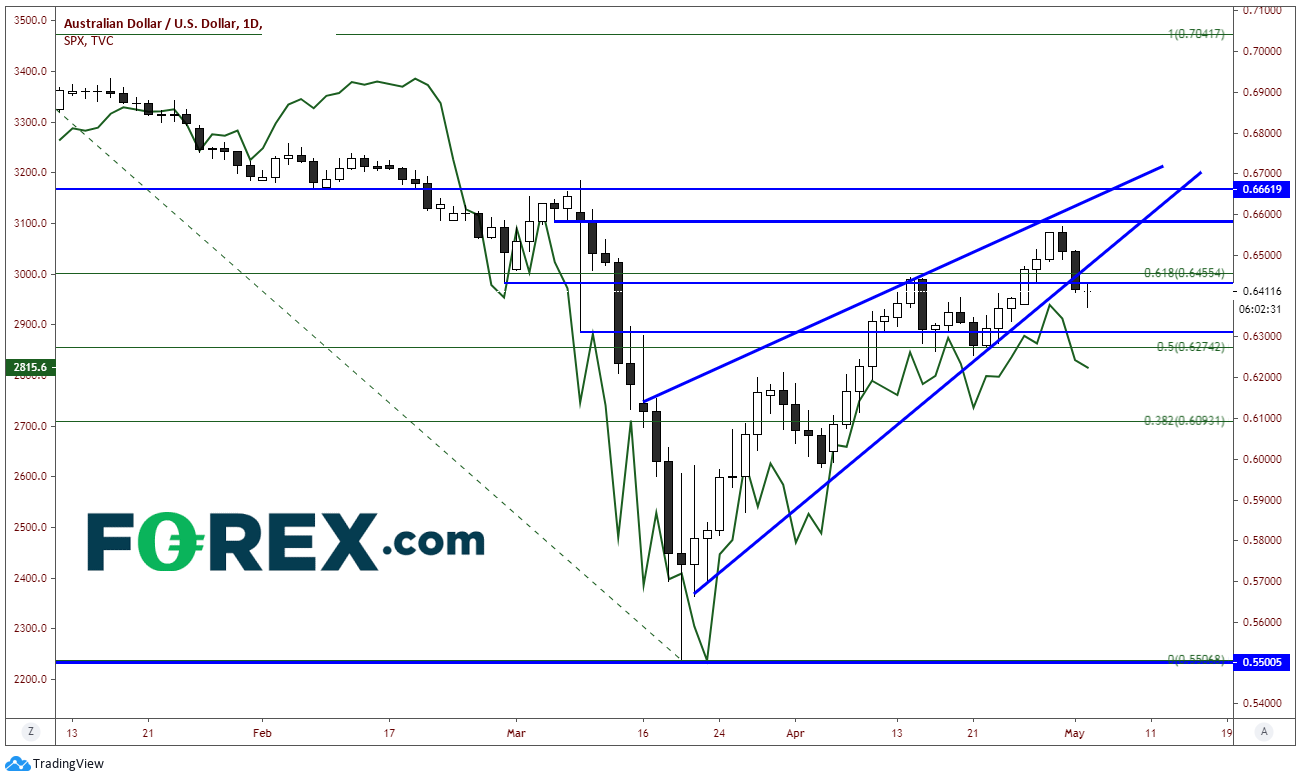 There are a few other tings the two assets have in common.  Both bottomed in mid-March within days of each other. They both formed an ascending wedge off the lows, and both retraced to the 61.8% Fibonacci retracement level from the February highs to the March lows (with the Aussie having a false breakout above).  They both held horizontal resistance at their highs on Thursday.  Currently, they both broke lower out of the ascending wedge.  The target for an ascending wedge formation ins 100% retracement of the wedge.  That would target the March lows for both the S&P 500 and AUD/USD.

If the RBA remains dovish and if stocks continue to move lower, AUD/USD may head lower as well.  There is a good deal of resistance above in both the S&P 500 and AUD/USD.  Since the two assets are so correlated, don’t be surprised if the two start moving lower together, possibly back towards their March lows!