The AUD/USD has responded positively to the latest Australian employment report, released overnight.

The AUD/USD has responded positively to the latest Australian employment report, released overnight. Although the headline employment change at +5,600 missed expectations of +15,200, this was only because of a sizeable drop in part-time jobs as full-time employment actually increased by a good 20,300 in September. What’s more, the unemployment rate unexpectedly decreased to 5.0% from 5.3% recorded in the previous month. As a result, the Aussie has climbed to a high so far of just under 0.7150 from its overnight low at just above 0.7100, and remains positive on the week after last week’s slight recovery.

However, the underlying trend is still bearish for the Aussie and nothing has fundamentally changed. Indeed, the bearish trend could resume in the event of a stock market sell-off, although things have calmed down a little this week. But perhaps the biggest catalyst holding the AUD/USD back has been – and still is – the rising yield differential between the US 10-year bond yields and equivalent Aussie yields, in favour of the former. The spread is currently at 0.478%, not too far of the multi-decade high of 0.541% hit earlier this month. If the spread were to narrow then the Aussie will have a good chance of a comeback, otherwise it may struggle to sustain any noticeable rally for the foreseeable future, regardless of short-term bullish catalysts such as stronger-than-expected Aussie data.

Still, there is some hope that things might turn positive for the Aussie in the not-too-distant future. And the best way to see that potential change is by monitoring price action closely as it trades around a critical technical area.

While the technical outlook on the AUD/USD remains objectively bearish – note for example the slopes of the 21-, 50- and 200-day moving averages, and the bearish trend line – the downward pressure has eased in recent days. Thus, the prospects of a short-covering rally is there, but we do need to see the breakdown of some resistance levels before we even entertain the bullish idea. At the moment, the AUD/USD is still holding below resistance and last year’s low around 0.7165. What’s more, the bearish trend line connecting the prior highs going back to the start of this year is still intact. Only if and when the AUD/USD breaks decisively above this trend line and makes a higher high will the bearish objectively end. Specifically, a move above the most recent high at 0.7315 is needed to create a break in market structure of lower lows and lower highs. But even a break above 0.7240 might be a short-term bullish development because for this to happen, price will have gone above the bearish trend line and the 50-day moving average.

All told, the path of least resistance still remains to the downside, so don’t be surprised if rates were to break down again and head towards 0.70 psychologically-important level next. 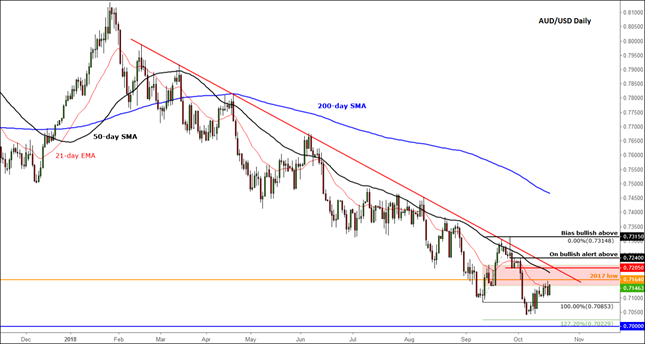