It’s another quiet day for North American economic data, leaving geopolitical developments as the market’s primary focus. And with little new on the US-China trade war front, traders are refocusing on the long-simmering geopolitical morass that is Brexit.

Given the fact that similar versions of the same bill have been voted down on three previous occasions (and some MPs have already come out against it), analysts are skeptical that this concession will be enough to get it across the line. May will make her case to MPs over the next couple of weeks ahead of an early June vote that may determine the PM’s fate.

Technically speaking, GBP/USD is trying to break an inauspicious streak: the pair has traded lower from open to close in each of the last six days, and ten of the last eleven, shedding more than 400 pips in a little over two weeks alone! 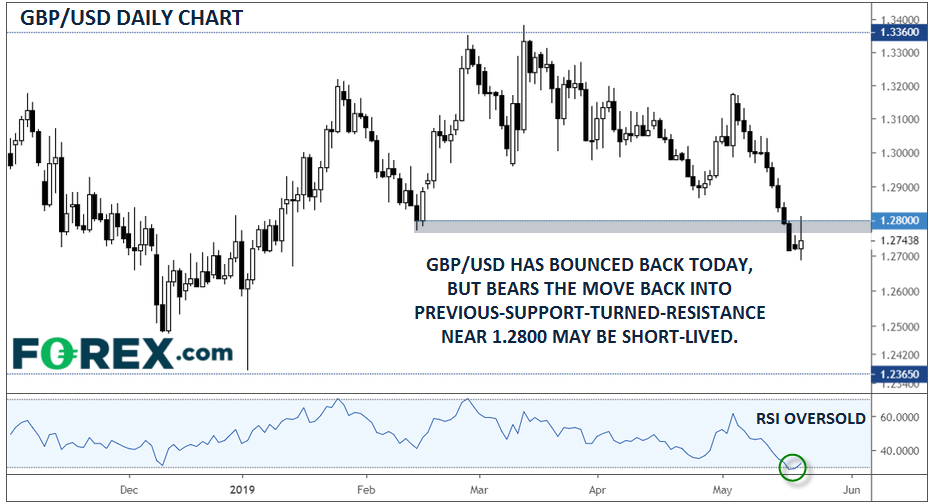 After this bout of relentless selling, the RSI indicator has hit oversold territory for the first time since August, raising hopes of a potential bounce. That said, lawmakers have little reason to rally behind May at this point, and with the potential for the Brexit party to make gains in this weekend’s European Parliamentary elections, traders may favor selling any short-term bounces toward previous-support-turned-resistance near 1.2800 as opportunities to join the established bearish momentum.