So far today, we’ve seen global stocks sliding across the board, previously high-flying tech stocks getting hit particularly hard, and WTI crude oil dumping another 5%, so there are plenty of options to choose among. That said, there’s been no turnaround over the last 12 months bigger than the shift in the cryptoasset markets.

From a fundamental perspective, it’s difficult to pin the recent drops on any specific catalyst, though it is worth noting that it coincided with the hard fork of Bitcoin Cash (itself a hard fork of Bitcoin). The tumultuous infighting and contentious debate between BCHABC and BCHSV may have underscored the chaotic nature of the entire cryptoasset space. Regulatory concerns have also been at the forefront of digital asset investors’ minds after the SEC announced civil penalties against two ICOs and the DOJ started an investigation into potential manipulation during last year’s big rally.

As we noted three months ago in “The State of Bitcoin and the Cryptoasset Market, Q3 2018”, if the previous support level near $6,000 gives way, “bears will likely look to target previous-resistance-turned-support in the $5,000-$5,100 area next.” Needless to say, that projection was quickly made obsolete as bitcoin tumbled to a 13-month low near $4400 on BITFINEX after breaking support last week. As the chart below shows, that level represents the 78.6% Fibonacci retracement of the entire August 2015-December 2017 rally: 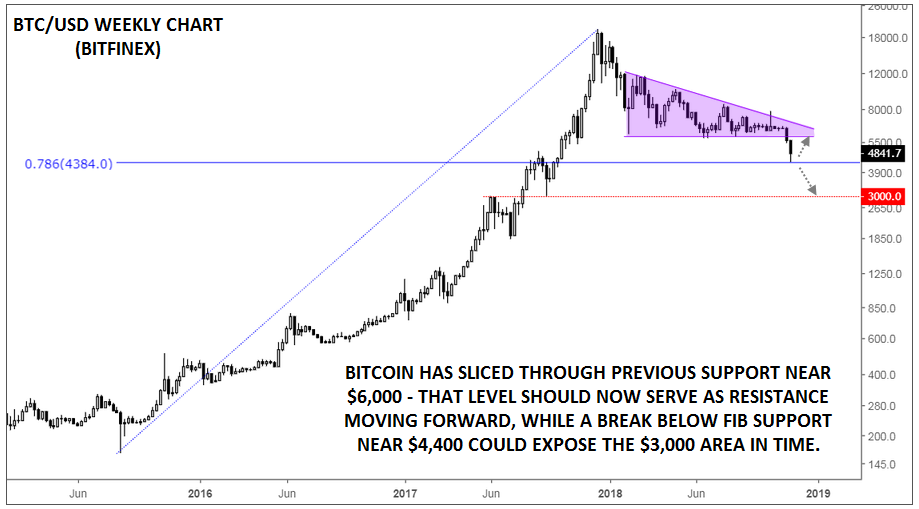 Source: TradingView, FOREX.com (Note this is a logarithmic chart)

After losing nearly a third of its value in less than two weeks, Bitcoin could certainly stabilize for a bit here. It’s worth noting that prices have just broken down from a prolonged (for bitcoin) period of low volatility (for bitcoin), so sentiment toward the space as a whole is likely to remain highly negative in the near term.