Despite today’s tentative recovery, there are some technical signs that Bitcoin has formed a near-term top...

Despite dubbing himself “Tariff Man,” President Trump still managed to catch markets off guard with last night’s decision to impose escalating tariffs on Mexico in retaliation to undocumented immigration. Not surprisingly, we’re seeing classic a classic risk-off move in effected markets, with the peso dropping sharply, US stocks dumping, and safe havens (treasury bonds, gold, and the Japanese yen) in demand.

As we saw earlier this year when US-China trade tensions flared back up, Bitcoin has also caught a bid. The granddaddy of cryptocurrencies has bounced back into the mid-$8000s after yesterday’s $1,000+ dump to the $8000 level: 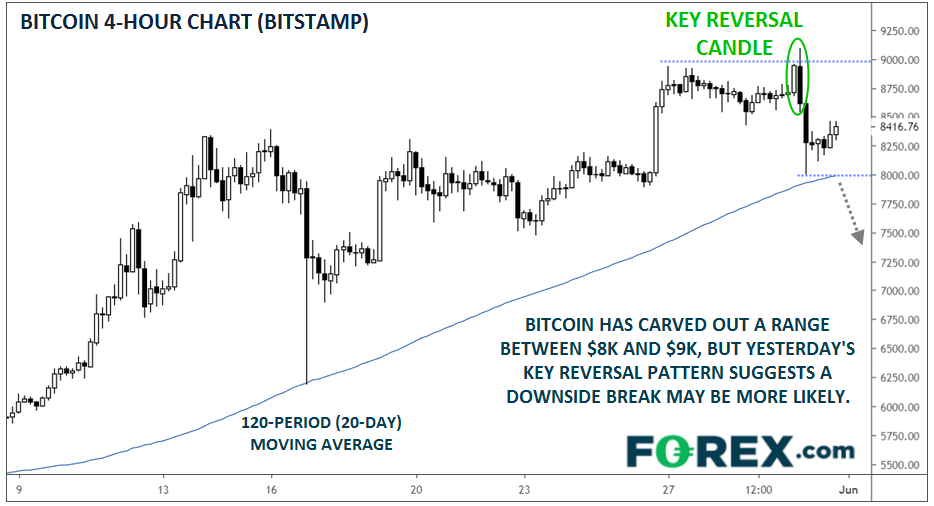 Source: TradingView, FOREX.com. Note that this product may not be available to trade in all regions.

Despite today’s tentative recovery, there are some technical signs that Bitcoin has formed a near-term top. Most notably, the cryptocurrency formed a “key reversal” candlestick on the 4-hour chart; as the name suggests, this pattern signals a reversal from buying to selling pressure and is often seen at market peaks.

Moving forward, the $8,000-$9,000 range will be the key zone to watch. A break below yesterday’s low and the 20-day moving average at $8,000 would confirm the reversal and open the door for a retracement back toward $7,000. While not the likeliest scenario at this point, a close back above $9,000 would signal that bulls have weathered the storm and clear the way for a likely continuation toward the widely-watched $10,000 level next.