Sentiment towards cryptocurrencies is turning sour with negative headlines pouring out from left, right and centre

Bitcoin was unable to build on its small gains from yesterday and at $9380, it is now closer to $9000 than the $10000 mark. Sentiment towards cryptocurrencies is turning sour with negative headlines pouring out from left, right and centre. Concerns that Facebook is banning ads and major crypto exchanges shutting down has really silenced the hype and some people are probably having second thoughts about investing their hard earned cash into digital currencies. With prices falling, would-be buyers are probably waiting on the side-lines until the downtrend is over, while existing buyers may be withdrawing to avoid giving back any remaining profit they may have accumulated. But all that could change very quickly once there’s clear evidence prices have bottomed out, as I am sure there are still a lot of people wanting to get on board when the time is right. For now though Bitcoin and other cryptos remain out of favour. It would be interesting to see if the rising government bond yields would weigh on noninterest-bearing assets like gold and Bitcoin.  These buck-denominated assets could come under further pressure in the event the US dollar makes a comeback on the back of Friday’s jobs report.  So, things are not looking great for Bitcoin right now, but that could all change suddenly due to the possibility of pent up demand.

But the manner in which Bitcoin prices have been going down suggests they are in distribution phase, which is probably not something that crypto bulls would want to hear. There is thus the danger we could see a sharper decline in the coming days before Bitcoin potentially bounces back. That being said we are continuing to monitor price action closely and watch for signs of a reversal. Specifically, we are keeping a close eye on recent highs, as when a prior high is breached, this could signal the end of a downtrend. As things stand, Bitcoin’s most recent high comes in at $11990 and this is now the bull/bear line. On the downside, some of the potential bearish objectives are as follows: 9220 – the most recent low; 8180-8310 range – this is where an old resistance level meets the 127.2% Fibonacci extension level of the most recent price swing; 7775/80 – the 200-day moving average and finally 6550-6855 range – old resistance and 161.8% Fibonacci extension level of the most recent price swing converge here. 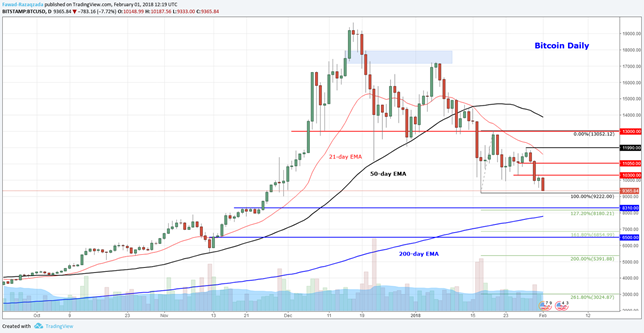