BOE recap: Taper, but not taper

The Bank of England (BOE) left interest rates unchanged at 0.1% and left their bond buying purchase program unchanged at 875 billion Pounds as well.  Only outgoing chief Andy Haldane dissenting in favor of reducing QE purchases to 825 billion Pounds.   The BOE also expects GDP for 2021 to increase to 7.25% in 2021 and 5.75% in 2022.  Inflation is expected to increase to 2.5% for 2021.  As with most central banks, the BOE says there are still risks to their forecasts, primarily coronavirus mutations.

As we mentioned in our BOE Preview, if the BOE were to continue buying bonds the pace of 4.4 billion Pounds per week, they would hit their targeted amount of 875 billion before it is due to expire at the end of the year.  That left the BOE with a choice to make:

The BOE made their decision.  They chose to taper, but not to change monetary policy. What was intriguing about the situation was not that fact that they chose to taper, but the way they released the headlines and statement.  Nowhere in the headlines did it suggest that the BOE was cutting back on the amount of bond purchases.  However, when the statement was released a few minutes after the headlines, it noted that ”the pace of these continued purchases could now be slowed”, or in other words, TAPERED.  The BOE will now buy bonds at a pace of 3.4 billion Pounds, rather than the previous 4.4 billion pounds. They still expect the bond purchase program to complete at the end of 2021.  However, they also noted that they do not consider the reduction of bond purchases to be a change in monetary policy. In the press conference that followed, BOE Governor Bailey noted that there is no message in slowing QE pace for future moves.

GBP initially moved lower on the headlines as traders thought the BOE was kicking the can down the road and would decide at the June meeting. GBP/USD moved from 1.3901 down to 1.3857.  However, after the statement was released, the pair moved as high as 1.3935!

In our Currency Pair of the Week, we noted that GBP/USD appears to be in a corrective phase after a 5 month advance (red channel).  The pair is banging its head against resistance between 1.3950 and 1.40000, which is a confluence of the top downward sloping trendline from the corrective channel (red), the bottom upward sloping trendline from the long-term channel (blue), and the psychological round number resistance level of 1.4000.  If price breaks above, it could move to retest the February 24th highs of 1.4241. Support is at Monday’s lows of 1.3800,  the April 12th lows of 1.3669, and the 38.2% Fibonacci retracement level from the September 23rd lows to the February 24th highs near 1.3636. 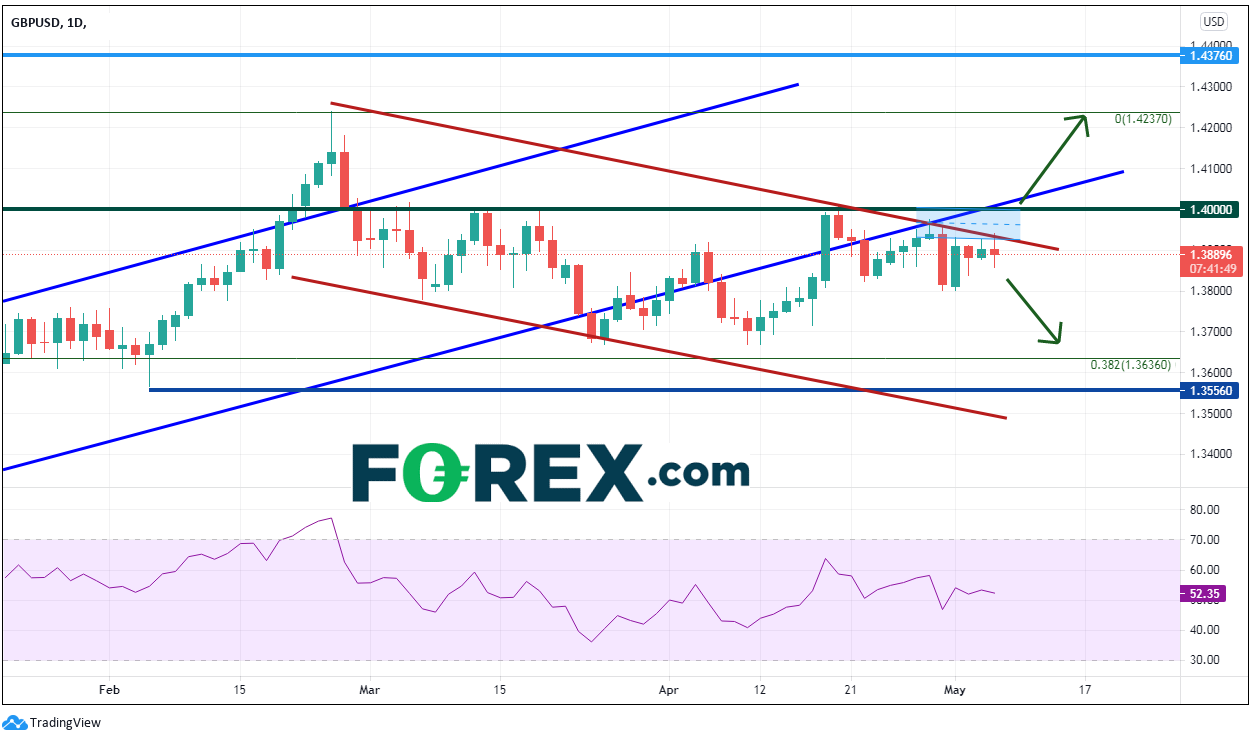 As traders continue to digest the taper-no taper news, the next move in GBP/USD may have to wait for the next catalyst to decide where the pair may be headed.  However, they may not have to wait that long, as US Non-Farm Payroll data due out tomorrow!