Crude oil prices are up for the third consecutive trading session with Brent hitting a new high for 2017 today.

Crude oil prices are up for the third consecutive trading session with Brent hitting a new high for 2017 today. At $64.82, the London based oil contract today surpassed the previous 2017 high of $64.62 by a few cents before pulling back a little. WTI, the US benchmark, was lagging behind at $58.00 and thus yet to surpass its corresponding level at $59.02 per barrel. The reason for the price divergence in the two oil contracts is all to do with expectations about current and futures supplies of oil in the US relative to the rest of the world. US oil supplies will most likely continue to grow as shale producers attempt to win more market share from the OPEC and some non-OPEC countries such as Russia, which is in an agreement with the oil cartel to restrict its crude production until the end of 2018. The second reason behind the price disparity, which has grown further today, is because of news that the North Sea’s key Forties Pipeline System is likely to be shut for weeks to carry out repairs to an onshore section of the line. This has put oil bulls on alert because no one is quite sure how long the closure is going to last with a spokesman for operator Ineos saying it could take “several weeks.” Although there are ample supplies of oil in storage tanks, this may not be enough to meet demand if the repair works take longer than “several weeks.” The Forties Pipeline System delivers the main crude oil underpinning the Brent benchmark; hence why it surged higher today.

Still, while Brent is trading at its highest level is certainly not bearish there are lots of reasons why prices could drift lower again – chief among them being expectations that supplies will rise again with recovering prices, especially in the US. From a technical perspective, though, there are no clear indications yet that a turnaround is imminent except that the momentum indicator RSI is in a state of negative divergence with price. On its own, this is not a bearish sign but a mere warning that the bullish momentum may be weakening. The sellers would like to see a clear reversal pattern emerge here such as a false breakout attempt. Whatever the outcome, we would only turn bearish short-term upon a break in market structure, specifically a clean break below the last swing low – in the case of Brent, at $61.10/20 area.  Meanwhile a close above the previous 2017 high of $64.62 would keep the bullish trend intact, in which case the rally may continue towards the Fibonacci extension levels shown on the chart. 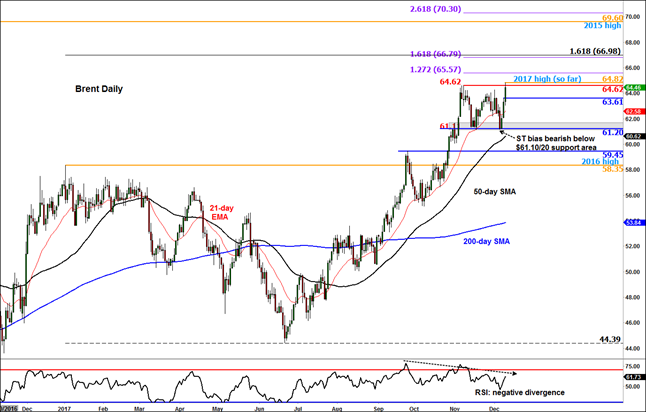