In a historic moment today, Theresa May has delivered the UK exit letter to her European Union colleagues, officially starting the Brexit process today. With so much uncertainty hanging over the UK economy, it is logical to think that the pound could remain under pressure...

In a historic moment today, Theresa May has delivered the UK exit letter to her European Union colleagues, officially starting the Brexit process today. With so much uncertainty hanging over the UK economy, it is logical to think that the pound could remain under pressure. Well, that may well be the case in the long-term, as after all Scotland’s future in the UK is becoming increasingly questionable. But in the short-term, sterling could be on the verge of a massive short covering rally. It is unlikely that governments within the EU would seek to punish the UK just because its people have decided that it should leave the union. Instead, the EU will likely hold constructive talks with the UK government to find a deal that would benefit both regions.  The trigger behind a potential GBP recovery could be if speculators unwound the record high sterling short positions that they have been accumulating in recent months.

Consequently I am on the lookout for short-to-medium term bullish price patterns to form on the GBP/USD and other GBP pairs in the coming days. Currently, the cable is stuck within its wide 1.20-1.27 range. But is in the upper half and above the now rising 50-day moving average. A couple of higher lows have now been formed. Thus price action is already starting to look bullish, though while inside the range, expect to see further choppy price action as clearly a lot of people are still bearish on the pound. As before, our first bullish objective is the top of the range around the 1.2680/70 area, where we also have the 200-day moving average converging. But to get there, it will first need to clear some short-term resistance levels for example at 1.2480 and 1.2615. Otherwise, a deeper pullback may be on the cards before the potential rally. 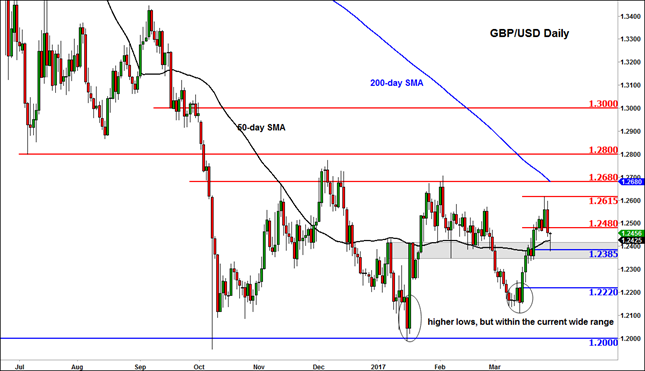