Brexit headlines have been in the driver’s seat

Brexit headlines have been in the driver’s seat as far as the Great British Pound is concerned.  As my colleague Ken Odeluga wrote earlier, it looks like the coming hours will tell whether pullbacks of the pound and related assets will gather pace.    Throughout the day, more and more headlines have come out, which in this case, are continuing to push Sterling to higher levels.  Although there will not be a deal today, it appears negotiators are close to an agreement. The latest developments are as follows:

The two most affected currencies of a Brexit deal (or lack of a deal) are the Euro and the Pound.  On a daily chart, EUR/GBP has been trading lower since the August 12th highs at .9324.  Once price fell to horizontal support and the 61.8% retracement from the May 6th lows to the August 12th highs, the pair bounced to the 38.2% retracement level and the psychological resistance near .9000.  In an almost textbook patterning, price broke lower, forming a flag formation which targets .8490, the May 6th lows.  Price fell relatively quick over the last few days and put in a marginal new low today.  Along with a close to oversold RSI, bears are hoping the pair may be due for a bounce towards the .8785 level where they can add to short positions. On a shorter-term time-frame, the RSI shows just how oversold EUR/GBP actually is, AND it is diverging from price, an early indication the pair may bounce. Price has also formed a falling wedge pattern.   If price were to break out higher from the falling wedge, the target would be a 100% retracement of the wedge, which is .8810.  This level coincidentally (or not) also happens to be the 50% retracement from the highs on October 10th to todays lows.  Horizontal resistance comes in just below that there at .8787.  Support comes in at the May 6th lows at .8490 (which is also the target for the flag pattern on the daily).  Below that, price can drop all the way to horizontal support from 2016 and 2017 near .8300 (not shown). 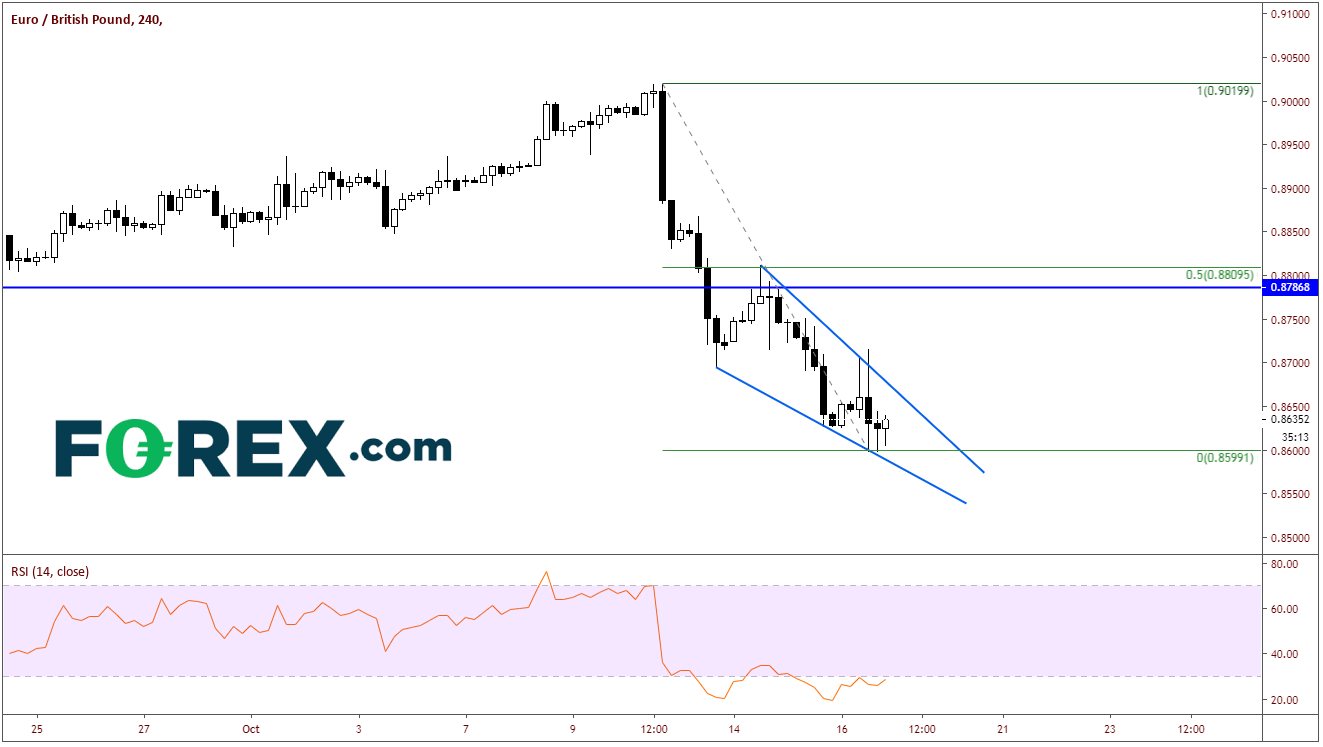 It appears now that a Brexit deal is in sight, however be aware that when a something is considered 99% done, that 1% seems to find a way of potentially messing things up!