Brexit: FTSE’s reaction may surprise you

<p>European equity markets are set to close the week on a more positive note, but still sharply lower. Just 24 hours ago, Brexit concerns, central bank inaction and falling oil prices were dominating the headline and stocks were tumbling. However, Thursday’s tragic killing of Labour MP Jo Cox saw both Brexit and Leave camps suspend their campaigns. This led to speculation that the Leave camp will now lose support and the bookies cut their odds for Brexit. The pounds and the FTSE 100 index, and stocks in general, staged a short-covering bounce. However this does not necessarily mean that those who have already made up their minds will change how they will vote. So, it is set to go down to the wire and it will be a very close call indeed.</p>

European equity markets are set to close the week on a more positive note, but still sharply lower. Just 24 hours ago, Brexit concerns, central bank inaction and falling oil prices were dominating the headlines and stocks were tumbling. However, Thursday’s tragic killing of Labour MP Jo Cox saw both Brexit and Leave camps suspend their campaigns. This led to speculation that the Leave camp will now lose support and the bookies cut their odds for Brexit. The pounds and the FTSE 100 index, and stocks in general, staged a short-covering bounce. However this does not necessarily mean that those who have already made up their minds will change how they will vote. So, it is set to go down to the wire and it will be a very close call indeed.

According to flows tracked by EPFR, investors have been pulling out of UK stock funds for eight consecutive weeks now, undeniably because of Brexit concerns. Almost $3 billion has now been pulled during this period. In the week to June 15 alone, $1.1 billion was withdrawn. The pace of withdrawals have been among the worse in recent years. Unsurprisingly, this has had some negative impact on the FTSE 100 and the stock market in general.

But unlike the pound, for stocks, it is not just Brexit concerns that are weighing heavily on the market sentiment at the moment; other factors are at work, too – such as concerns about the impact of a US rate increase this year, weak growth in the Eurozone and China, and renewed weakness in oil prices. Indeed, it could be that even if the UK public votes to remain in the EU, that the markets may stage a very quick bounce before falling once more. Conversely, a Brexit vote may be mostly priced in, meaning that in this potential scenario, stocks could fall sharply for maybe a couple of days before bouncing back.

So, the key takeaway point from what I am trying to say is this: don’t get complacent, especially when it comes to trading a major macro event like this. How do you know that the entire or most of the market participants are thinking the same way as you do – and not only that, how do you know they will act on their thoughts by trading that way? Furthermore, even if most market participants do what you think they will, how do you know they won’t take quick profits on their positions which could reverse the trend quickly?

Indeed, if history teaches us one thing, it is this: don’t always believe the hype. Traders may recall that in September of 2014, in the lead up to the Scottish referendum, the FTSE began to drift lower after reaching a major resistance zone around 6850-6900 area (see figure 1, below). At the time, I heard so many people suggesting that if Scotland were to leave the UK, that the FTSE would plummet and that if it remained part of the UK, the index would break to new all-time highs and stage a massive rally. Well, as it turned out, Scotland voted to remain in the UK and lo and behold, the FTSE staged a minor relief rally. BUT a major sell-off then followed after the index re-tested that 6850-6900 area, before dropping a massive 800 points or 11.7% by the very next month from that peak to the low.

So, again, I would like to stress the importance of not projecting your thoughts onto the markets because as soon as you do that and price action fails to conform to your thinking, you will get disappointed and make all sorts of trading mistakes. Thus, whatever the outcome of the vote, treat the markets with respect, take it from one to the next level, and so on.

Now, looking at the current chart, one can see, in figure 2, that the FTSE tested the prior support area of 6040-6055, now resistance, before pulling back slightly on Friday. As we go to press, the index was still holding below this area but looked set to close higher on the day. Obviously a lot will depend next week on the outcome of the vote, but for now, the path of least resistance is to the downside. The resistance levels to watch are shown in red, support in blue. Among the support levels, the area around 5850-5880 is where a couple of Fibonacci levels converge with an AB=CD pattern. The index got very close to this region on Thursday before bouncing back. This area should be watched closely next week for a potential bounce. However if the index breaks through this area, the next stop could be at 5770 or even 5600 – the latter could easily be reached – and indeed breached – in the event of a Brexit vote. Meanwhile in the event of a remain vote, the index could climb all the way back to its bearish trend line before deciding on its next move, although this will depend on where the index will be trading before the outcome is announced. 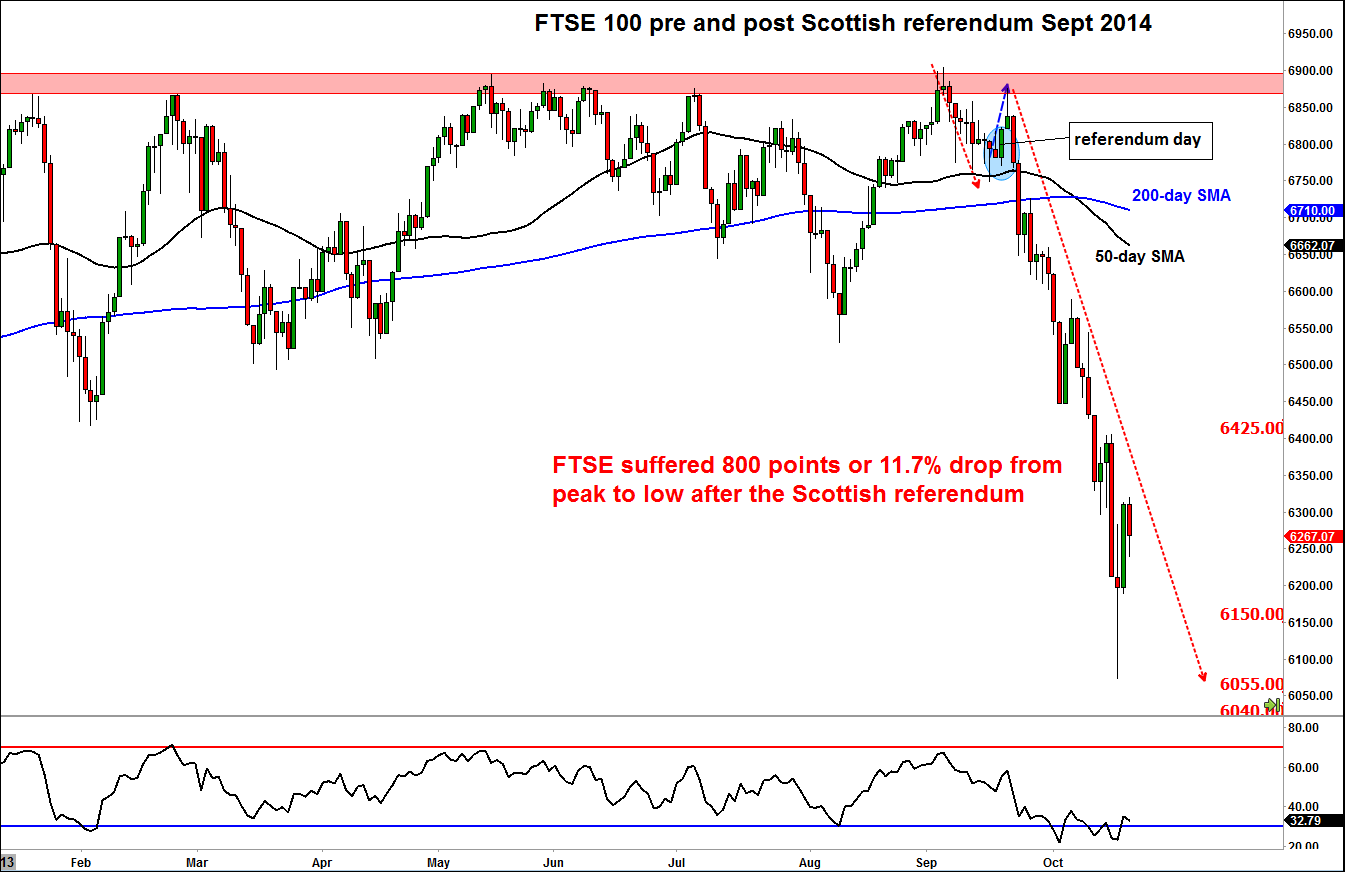 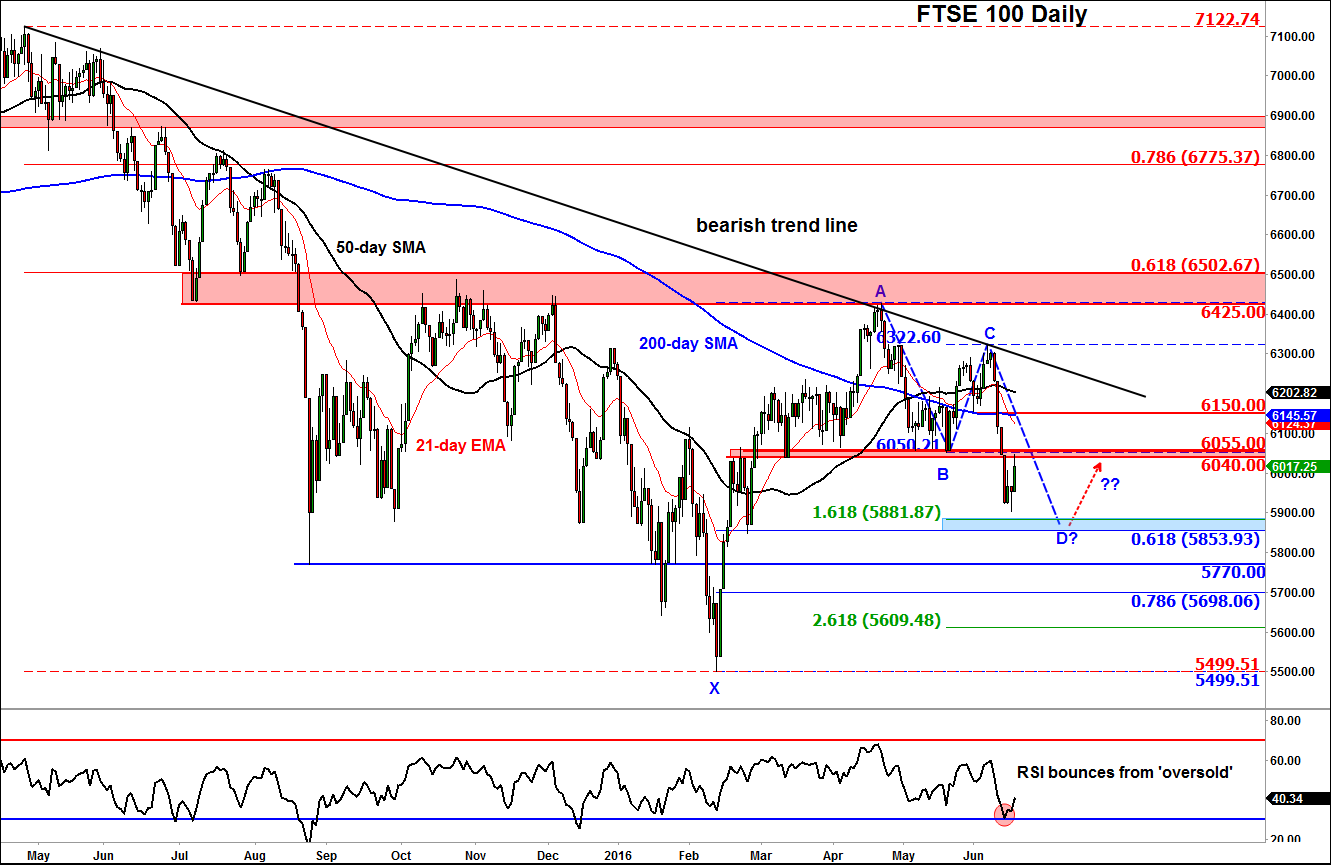