BT Group earnings preview: where next for BT shares?

There are plenty of potential catalysts that could inject volatility into BT Group shares when the telecoms giant releases preliminary results later this week. We explain what to expect and consider where BT shares could be headed.

When will BT report Q4 and FY results?

BT Group will release results covering both the fourth-quarter and the full-year to the end of March on the morning of Thursday May 13.

This is set to be the last set of annual results to be presented by BT chairman Jan du Plessis, who announced in March that he would be leaving sometime this year once a successor had been found, and there will be lots to watch out.

It is all change at BT. Not only is it having to navigate the pandemic, which has weighed demand from consumers and businesses, but it is currently trying to make itself fit for the digital age. It has been streamlining itself by selling off businesses in Spain, Latin America, France and, most recently, Italy. It has established a new technology unit named Digital to spearhead its transformation and deliver new growth. It is in the process of setting up a standalone procurement business, and has confirmed it is exploring how to take BT Sport to the next stage of growth by striking some sort of deal with partners, possibly with a big name like Amazon or Disney.

And, of course, it has the mighty job of rolling out 5G and faster fibre broadband to homes around the UK. It has now hooked up fibre broadband to 4 million homes, marking a solid start to its £12 billion investment to hook up 20 million homes over the next four to eight years. BT, which owns EE, has now launched 5G in 125 towns and cities. Major news on any one of these many issues has the potential to move shares.

In terms of financials, BT has said it is aiming to deliver normalised free cashflow of £1.3 billion to £1.5 billion in the recently-ended financial year, having raised the lower-end of that range a few months ago. Its guidance is for annual adjusted Ebitda of between £7.3 billion and £7.5 billion.

A Reuters-compiled consensus shows analysts are expecting annual revenue to decline by 6.5% to £21.4 billion and for reported profit after tax to plunge by almost 13% to £1.5 billion. Diluted earnings per share is expected to fall almost 19% year-on-year to 18.92 pence.

BT’s share price has been trending higher since early November. It trades above its multi-month ascending trendline and above its 50 & 20 SMA on the daily chart showing an established bullish trend.

The RSI has moved firmly into overbought territory so some consolidation or an easing back in the price could be on the cards.

Whilst the price remains above 160p the near-term bullish trend remains intact. Should the buyers fail to come in at this level then a deeper decline towards 150p the 50 SMA could be on the cards.

An upside target could be 180p the pre-pandemic December 2019 low. 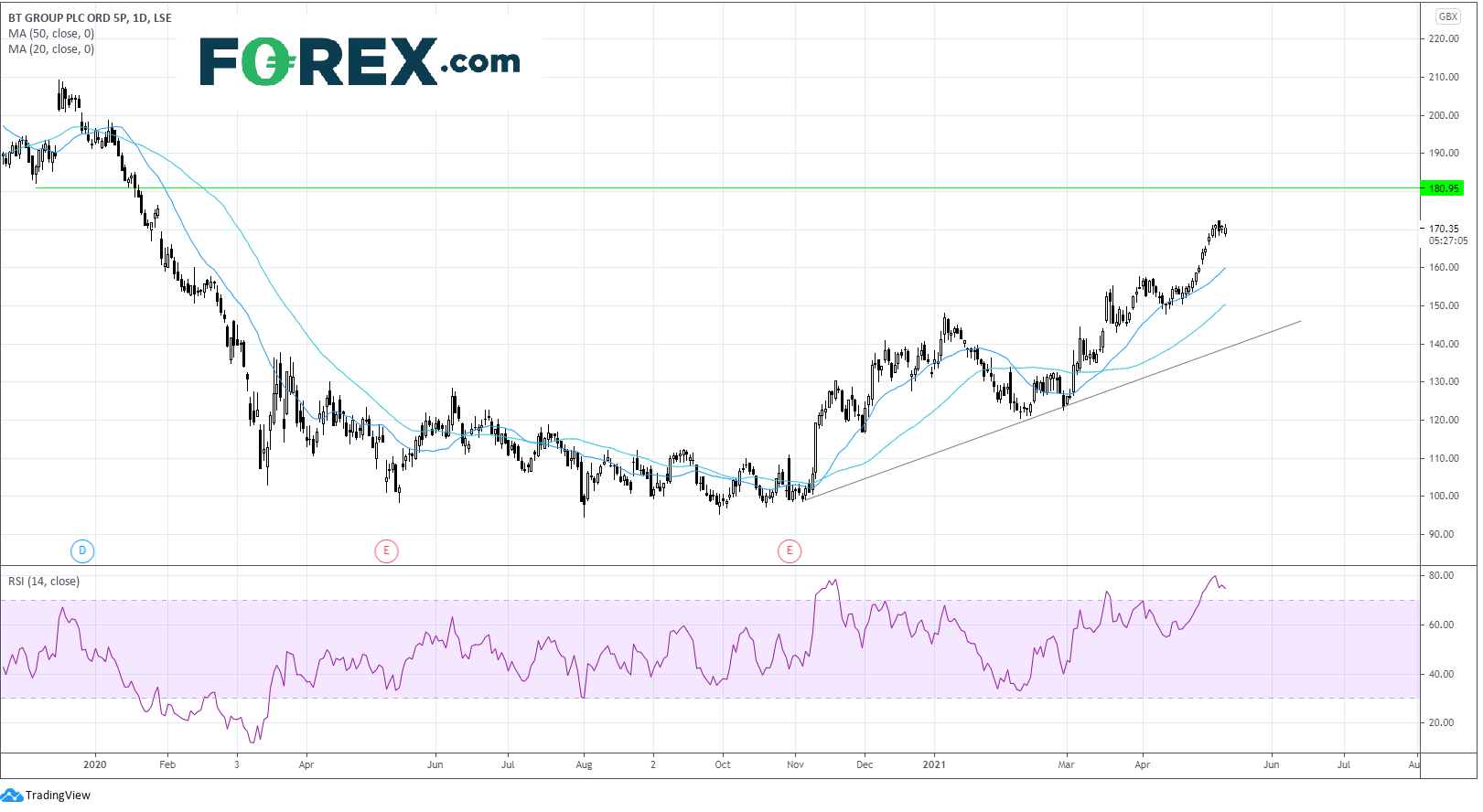 How to trade BT shares

You can trade BT Group shares with Forex.com. Follow these easy steps to start trading today: