Busy next week for financial markets

Another week is about to draw to a close and it has been a very good one for the US dollar, which broke out against a number of currencies, most notably the euro after a dovish taper of QE by the ECB.

Another week is about to draw to a close and it has been a very good one for the US dollar, which broke out against a number of currencies, most notably the euro after a dovish taper of QE by the ECB. Friday’s stronger-than-expected US GDP boosted expectations that the Fed will hike rates one more time before the year is out. This week has also been good for European indices, except in Spain where the Catalonian government declared independence. US technology companies reported excellent earnings results, causing their share prices to surge which led to the tech-heavy Nasdaq 100 roaring higher on Friday. Gold managed to bounce back on Friday in what has otherwise been a bad week. The dollar-denominated precious metal has been undermined by rising levels of risk appetite and a rebounding greenback.

Next week should be equally, if not more, busy than this. For we will have rate decisions from three central banks: Bank of Japan, US Federal Reserve and Bank of England. In addition, we will have employment reports from both North American nations as well as New Zealand, and Eurozone CPI, German retail sales, UK and US Services PMIs, and Chinese manufacturing PMI. On top of all of this, there will be lots of company earnings reports to look forward to, including from Facebook and Apple. Oh yea, and US President Donald Trump is apparently planning to announce who the next Fed President will be next week, too.

So, there’s lots to look forward to next week. One interesting market to watch could be the GBP/USD, which has been coiling in the past three weeks. As can be seen on the weekly chart, below, the long-term downward sloping trend line held after this year’s rally failed to sustain itself around the 1.35 area. In addition to 1.35 being a psychologically-important handle, this was also a key long-term support level back in 2009. Once support, it has now turned into resistance. Thus the long-term technical outlook remains bearish while we hold below 1.35, and bullish above it. There are some support levels worth watch for downside objectives. These including the psychologically-important 1.30 handle, which is also where the 38.2% Fibonacci retracement level converges with a medium term bullish trend line. In the event this level gives way, a drop towards the next retracement levels at 1.2820 (50%) and 1.2620/5 (61.8%) would not come as surprise to us. 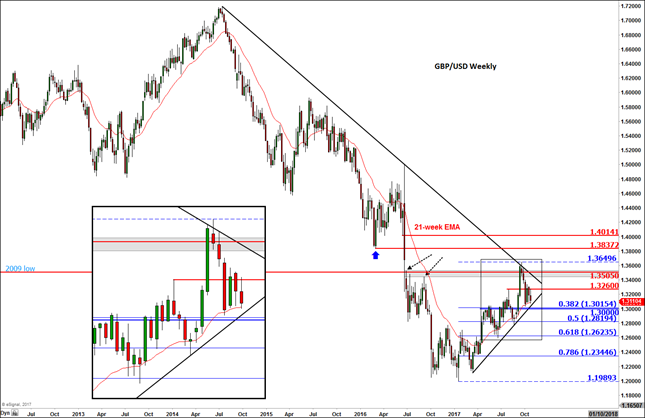