BYND: Will Beyond Meat Reach the Promised Land?

BYND traders are looking ahead to the company’s bright future, which presents both substantial profit opportunity and elevated risk

Almost exactly a year ago, Beyond Meat (BYND) completed its highly-anticipated initial public offering, ultimately raising nearly $250M at a valuation of around $1.5B.

To say that investors were excited about the potential for the company’s plant-based meat alternatives would be an understatement: even after raising its IPO price by 25% to $25, the stock still rocketed higher by more than 160% in its first day of trade (marking the largest one-day IPO rally since 2000 among companies with a $200M+ market capitalization) and ultimately reached a peak at nearly $250 per share, or about 10x its IPO valuation. At the time, we noted that “BYND looks like it may be priced to perfection. The meat of the matter is this: while the stock could certainly grow into its lofty valuation, the company’s successful IPO will ironically draw even more competition into the space, potentially planting the seeds for disappointment moving forward.”

Looking back a year later, the stock did eventually complete an incredible +500% / -80% round trip back toward its first-day price below $50 in the depths of the COVID-driven market panic, but the stock has been one of the best performers in the recovery since then, surging nearly 200% in the last eight weeks alone! Given the massive volatility the stock has seen over the past year, we wanted to take a closer look at BYND from both a fundamental and technical perspective to evaluate whether it’s more likely to extend the recent gains or revisit sub-$100 prices in the coming weeks.

As we noted in our recent piece about another such “story stock”, Zoom Communications (ZM), traditional value investors like Warren Buffett won’t be buying BYND any time soon. As the dashboard below shows, the company trades at an astronomical forward P/E ratio of 309, with a similarly ludicrous acquirer’s multiple (EV/EBITDA) of 280: 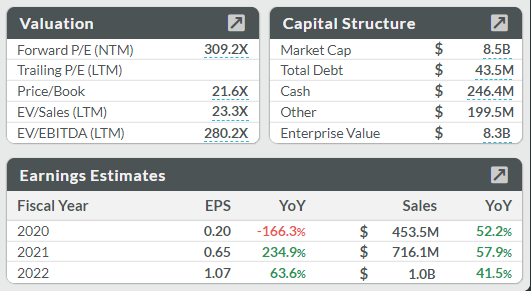 Of course, value investors aren’t the ones buying BYND; the stock’s day-to-day fluctuations are instead being driven by growth-oriented and momentum investors. From that perspective, the stock has plenty to offer, with essentially zero debt, sales projected to double in the next two years, and EPS projected to grow 5x by 2022. Rather than focusing on current operations and profitability, BYND traders are looking ahead to the company’s bright future a few years down the road, which presents both substantial profit opportunity (if the company grows more quickly than expected) and elevated risk (if the anticipated growth fails to emerge).

In terms of the broader cultural backdrop, secular trends toward environmental awareness and growing interest in the perceived health benefits of vegan/vegetarian diets could provide a major tailwind for the stock moving forward. In the short term, the COVID-driven disruption to global meat supply chains makes the vertically-integrated non-meat protein producer particularly more compelling in the current environment.

In the long run, we’re still concerned that BYND will be able to capture enough of the $1.4T global meat market to “grow into” its lofty valuation, but that doesn’t mean the stock can’t extend its bullish momentum in the weeks and months to come.

Technicals: The Trend is Your Friend (Until it Ends!)

Thankfully, the company’s technical outlook is a bit more straightforward. In essence, BYND is a classic momentum stock that traders want to be long while its short-term trend is higher and out (or short) when its short-term trend is pointing downward. While it’s impossible to define “the trend” across all timeframes, one simple definition that’s worked well for BYND so far has been the relationship between the 8- and 50-day exponential moving average (EMA). When the shorter-term average is above the longer-term average, BYND can be seen as trending higher, whereas the trend has generally shifted in favor of the bears when the 8-day EMA crosses below the 50-day EMA: 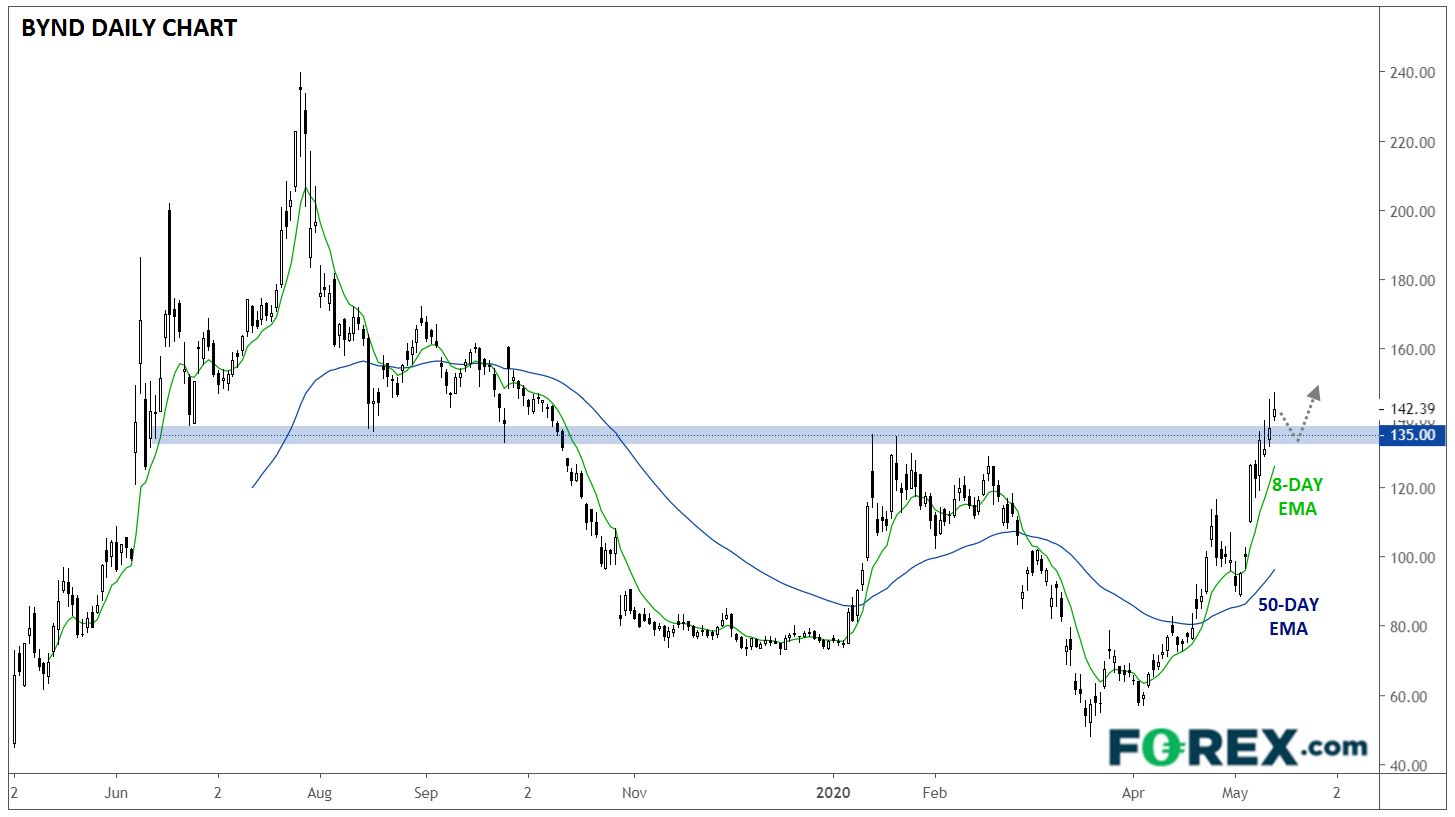 As of writing, BYND’s moving averages are trending higher, with the 8-day EMA above the 50-day EMA, signaling an uptrend and bullish bias across shorter-term timeframes. The stock also has broken above a previous resistance zone around 135 to hit its highest level since early October. With little in the way of previous resistance levels nearby, momentum traders will generally favor short-term buy trades.

Time will tell if Beyond Meat ultimately reaches is goal of revolutionizing protein consumption across the globe, but given the company’s bright future (and the high degree of uncertainty about whether it realize that future), it should offer trading opportunities galore in both directions in the weeks and months to come!