The pound finally broke below the $1.20 handle this morning as uncertainty over the Brexit-hit UK grew further ahead of an important day in parliament.

It was inevitable. The pound finally broke below the $1.20 handle this morning as uncertainty over the Brexit-hit UK grew further ahead of an important day in parliament, before staging a bit of a recovery. It is expected there to be enough rebel Tory MPs that oppose a no-deal Brexit who could join forces with the opposition and introduce legislation to force the government’s hand. This would effectively remove any leverage Boris Johnson will have in trying to renegotiate the Withdrawal Agreement. As such, if the bill – which seeks to delay the UK's exit date – passes, then Mr Johnson will have no choice but to dissolve the parliament and call a snap election.

The prospect of an early election means more uncertainty, and markets generally don’t like uncertainty. This alone can explain away the pound’s weakness over the past few days, but there is also a growing possibility that there might be a no-deal Brexit after all. Investors have realised that they may have mispriced a no-deal, messy, exit scenario, and are now acting accordingly by dumping the pound.

Also hurting the pound is evidence that the Brexit uncertainty is having a negative impact on economic activity, further reducing the possibility of a rate hike from the Bank of England any time soon. Today, for example, saw the construction PMI dropped to 45.0 in August, moving further into contraction territory after printing 45.3 in July. According to IHS Markit, purchasing managers in the sector reported the sharpest decline in new work for over 10 years, while business activity fell for the fourth month in a row. This comes on the back of a poor showing from the manufacturing sector as was reported by Markit yesterday. According to the PMI, manufacturing activity contracted to 47.4, its weakest level in 7 years.

The important question is where do we go from here?  The pound is clearly oversold in the short-term outlook so don’t be surprised to see short-lived spikes here and there. Essentially, though, investors will not be in any rush to buy the pound “on the cheap,” even if the exchange rate may be at a three-year low against the dollar today. Sterling can certainty get even cheaper if the fundamental backdrop does not change materially. That being said, the negativity is now at least partially priced in, so the downside could turn out to be limited from here. Still, the bulls will want to see evidence of a breakthrough in the stalemate before buying the pound aggressively. In the interim, any strength for pound crosses would more likely come in the form of short covering or weakness in the foreign currency that it is trading against. In the case of the GBP/USD, for example, there is a possibility that this week’s upcoming economic numbers from the US will undershoot forecasts and therefore pressurise the buck.

From a technical perspective, one of the very few things the bulls could take heart from is the fact the Relative Strength Index (RSI) is in a state of positive divergence with the underlying price action, as the indicator is yet to break its previous low. Also, the 1.20 handle is a psychologically important number which some of the bears had undoubtedly targeted before. Now that we are here, short-side profit-taking could help to provide some short-term support. In any case, though, there are plenty of overhead resistance levels that could hold the exchange rate down, starting around 1.2110. 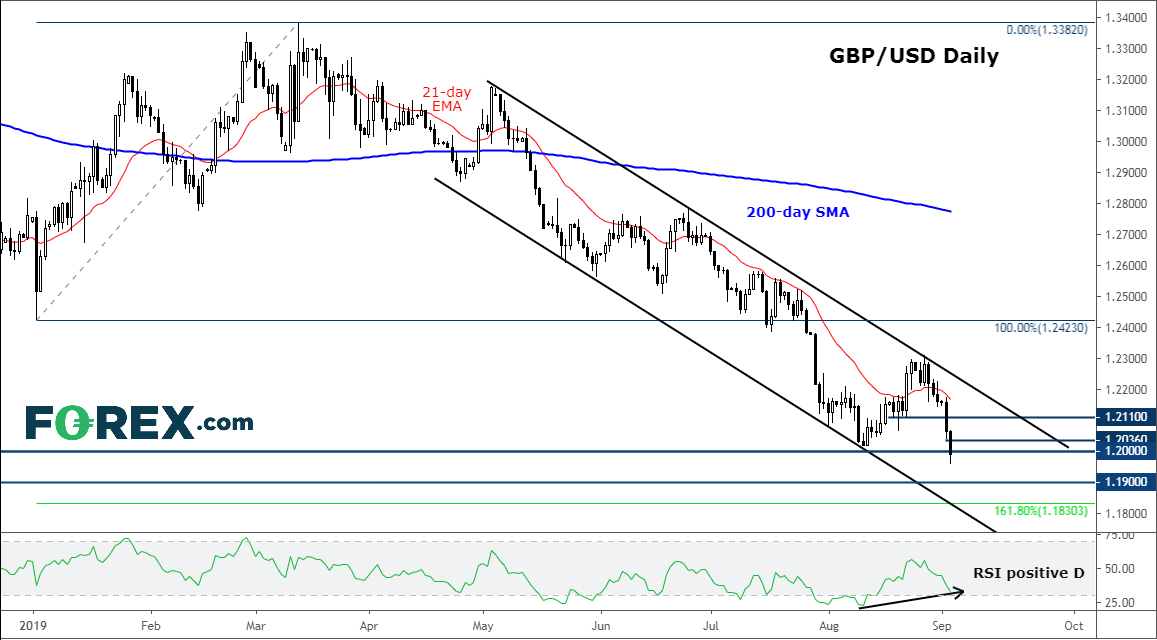