Today’s session has clearly been dominated by risk aversion with safe-havens gold, silver and yen all shining brightly.

Today’s session has clearly been dominated by risk aversion with safe-havens gold, silver and yen all shining brightly. Meanwhile stocks, oil and commodity currencies all took a hit. Sentiment has been cagey for the past week and a bit because of concerns over the economy, with the latest macro pointers in the US taking a downturn. Investors are also waiting for the start of high-level trade talks between the US and China, scheduled for later this week. With Donald Trump putting several more Chinese technology companies in a blacklist, investors were erring on the side of caution in case the talks collapse again without any agreement.

Among the yen pairs being impacted by today’s risk-off trade is the CAD/JPY. The Canadian dollar failed to find support from stronger-than-expected Canadian housing market data and was instead hurt by today’s rise in risk aversion and falling oil prices, with investors continuing to price in weaker demand growth for crude amid increasing signs of an economic slowdown. The CAD will remain in focus with key Canadian employment report expected on Friday, and as investors continue to watch the US-China trade developments. So, it is quite possible that rates could rise again should we see favourable developments, which means traders should remain nimble.

Today’s publication of Canadian housing market data beat expectations – not that it provided much support to the Loonie. Building Permits rose 6.1% m/m vs. 2.3% expected while Housing Starts came in at 221K vs. 217K eyed.

From a technical point of view, the trend remains bearish for the CAD/JPY given that price is holding below both the downward-sloping trend line and the 200-day moving average. For a moment though it looked like the bulls were back in town after the CAD/JPY broke above yesterday’s high and resistance around 80.75/80. But that was a brief fake out, and rates have been fading throughout the afternoon. At the time of writing it was coming off its worst levels, although remained near the day’s lows. If the CAD/JPY breaks beneath Monday’s low at around 80.05 then it will have created a bearish engulfing candle on its daily time frame. If seen, this would point to further weakness tomorrow, with the next support coming in at 79.80.

However, if the bulls step in here and drive prices back to a fresh high on the session then that would invalidate the bearish bias as we will have gone back above the 80.80 resistance level. In this potential scenario we could see a nice recovery towards the more significant resistance trend line and the 200-day moving average circa 81.25-82.00 in the days ahead, as the sellers rush for exits. 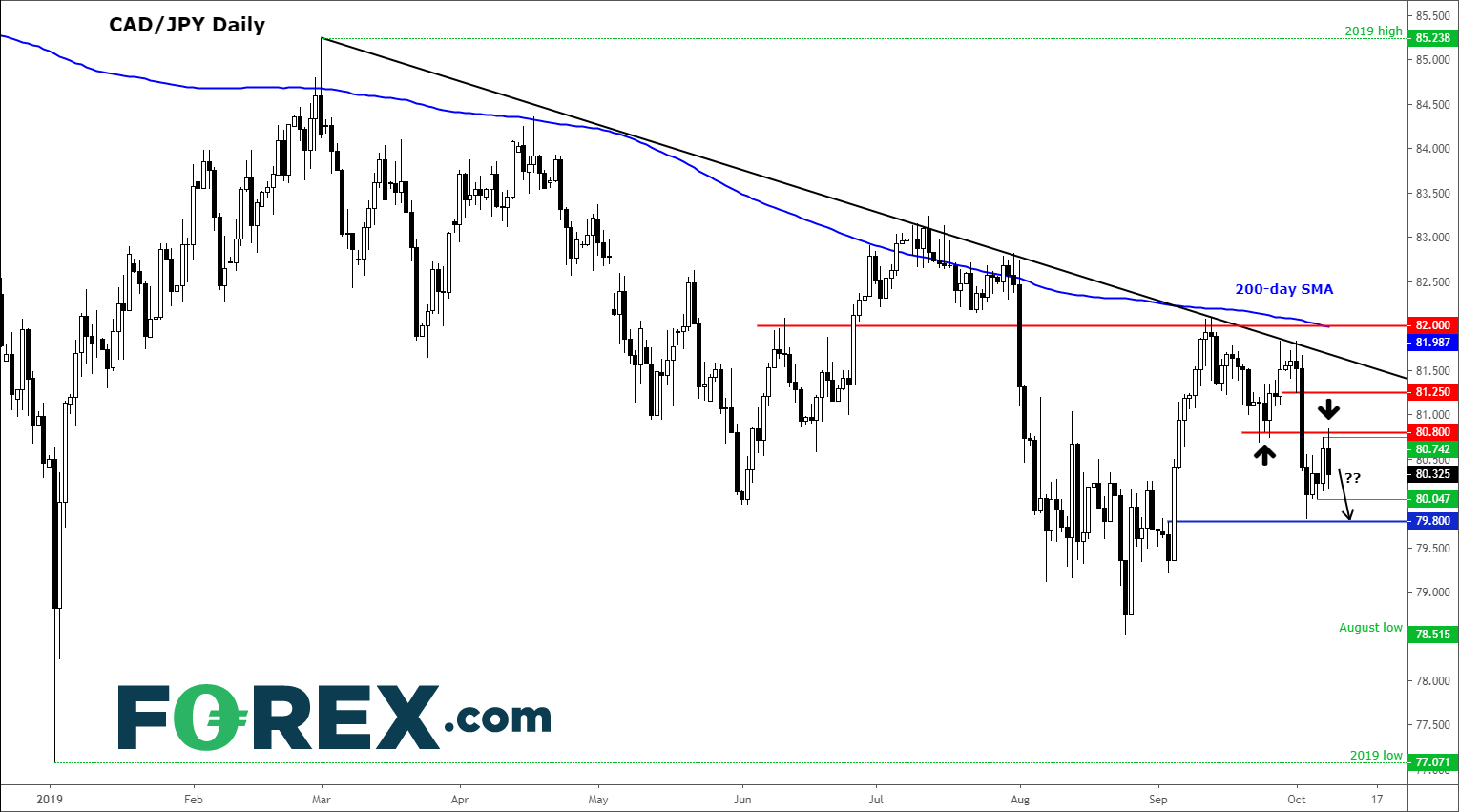