It was a quiet day for the S&P 500.  The Index was near unchanged on Tuesday as we head into the Fed meeting on Wednesday afternoon.  The big question everyone is waiting to hear the answer to is: Will the Fed address the move higher in interest rates (some 65 basis points in 10-year yields) since the last meeting, and if so, how?  Will the Fed be restructuring the bond buying program (currently at $80 billion of Treasuries and $40 billion MBS per month)? Perhaps they will provide a rosier outlook in the dot plot, in which they would move the timeframe forward as to when they would expect to hike rates.  Or maybe they do nothing…and continue with the ongoing theme that inflation expectations are transitory and the rise in yields is unsustainable. See our full Fed preview.

It seems though, that the large cap S&P 500 is in wait-and-see mode.  The index is near unchanged on the day after reaching new highs earlier in the session.  However, the range on the day is only 28 handles. If prices do decide to pull back after the meeting, it wouldn’t be that unexpected.  Price is grinding up against the top trendline of and ascending wedge and the psychological round number resistance near 4,000.  The RSI is diverging with price.  Perhaps a spike through 4,000, take out stops, then a pullback? Maybe. 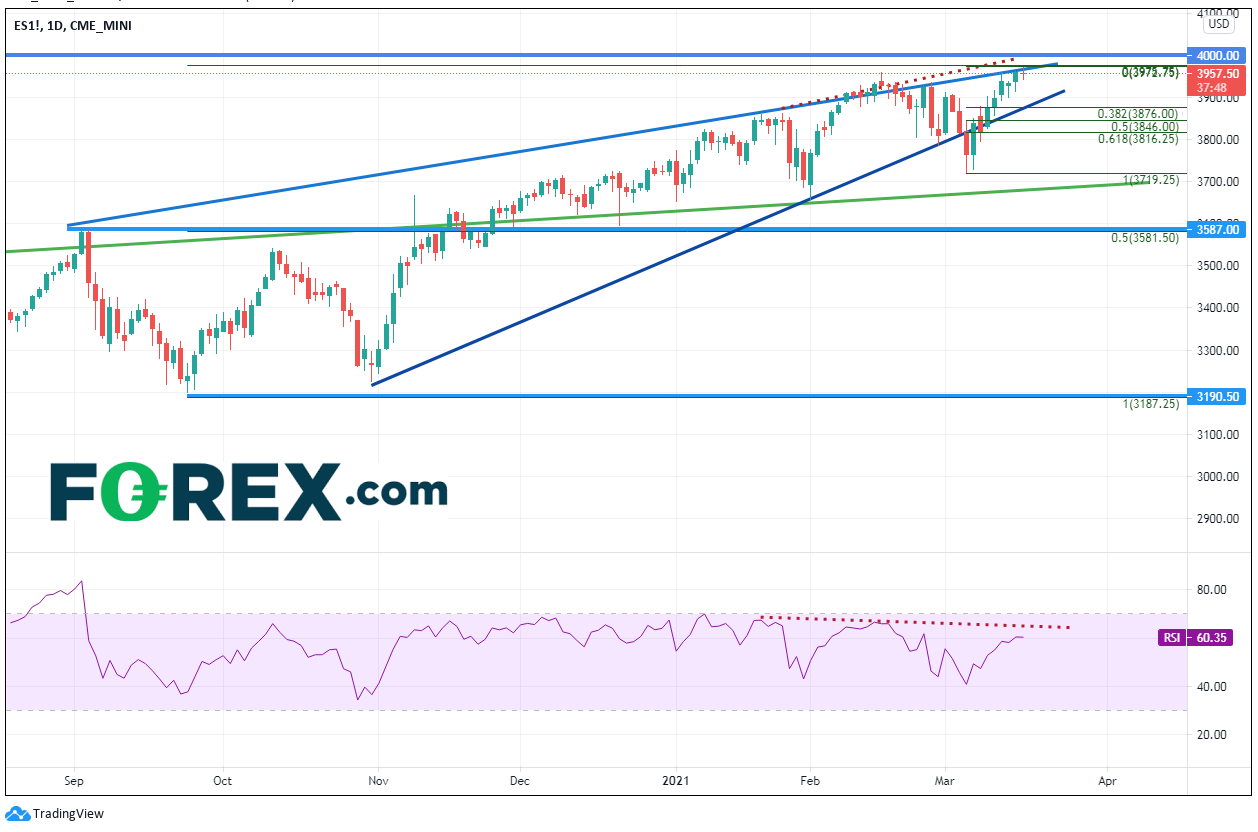 But if price did pullback, how low could it go?  The most immediate level is the confluence of support near the 38.2% Fibonacci retracement from the lows of March 4th to the highs on March 16th, and the upward sloping bottom trendline of the ascending channel near 3876.  Below there is the 50% retracement level and the 61.8% Fibonacci retracement from the same timeframe near 3846 and 3816,25, respectively.  Below there is March 4th lows near 3719.25.

Longer term,  if 10-year yields continue to rise, we can expect S&Ps to fall even further. The upward sloping green trendline dates all the way back to January 2018, which crosses near 3675.  And then is horizontal support from previous highs near 3587, which also happens to be the 50% retracement level from the September 24th lows to Tuesdays highs.

If price breaks below there, the expected target for an ascending wedge, which is a 100% retracement, comes into play.  Below 3587, price looks like if could fall rapidly to the target and horizontal support near 3190.

It was a very quiet Tuesday.  Expect the same heading into the meeting on Wednesday.  If the Fed gives the sense that they may begin sooner than later, the Jenga tower may be ready to fall over.