Can Bitcoin sustain its rally?

It doesn’t feel like it but Bitcoin has risen nearly 30% from its lowest point in June.

Bitcoin and other cryptocurrencies such as Ethereum and Ripple have risen sharply over the past few days, most notably on Monday and Tuesday. It doesn’t feel like it but Bitcoin has risen nearly 30% from its lowest point in June. Sentiment has been boosted by a number of positive developments including news that BlackRock, the world’s biggest asset management company, is looking to invest in the digital currency. Of course, this is not the first time we have seen such a big rise only for the downward trend to then resume. But could it be different this time? The short answer is that it is far too early to say. Only when Bitcoin makes a distinct higher high can we then talk about a longer-term low.

Still, as a result of the rally, Bitcoin has broken a few levels of resistance which may be an indication that the bulls are regaining some control, at least in the short-term anyway. It is worth pointing out that they also successfully managed to defend the long-term support at 6000 after the bears tried and failed to push it below that barrier on several occasions. Thus, if BTC/USD were to make a higher high now then things could get really interesting. The most recent swing high is still miles away around $9950, which means the bulls have some work to do.

Indeed, there are several resistances that need to be tackled first, starting at $7500 which was being tested at the time of this writing. This level had been support and resistance in the past, so a bit of hesitation to go above it makes perfect sense. An additional level of resistance comes in at around $7800 where an untested broken support meets the top of a triangle pattern.

Meanwhile support comes in at $6800, which is the most recent broken resistance level. Here, we also have the 50-day moving average come into play. Thus, should Bitcoin pulls back to $6800, it is very important that the bulls defend their ground here, otherwise the bearish trend could resume. 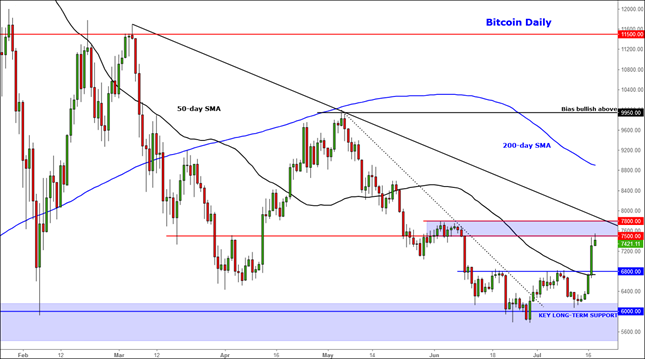