Can the ECB get EUR/USD traders invited to the global volatility party?

<p>Global markets are once again in turmoil today as the rout in oil prices is extending further today. West Texas Intermediate (WTI) is trading lower by over 4% today, briefly breaking below the 28.00 handle to trade at a new 12-year low. The precipitous drop in oil reinvigorated the big risk-off move we saw in the first two weeks of the trading year, and the widely-watched Dow Jones Industrial Average of US megacap companies was trading lower by over 400 points at one point during the lunch hour. </p>

Global markets are once again in turmoil today as the rout in oil prices is extending further today. West Texas Intermediate (WTI) is trading lower by over 4% today, briefly breaking below the 28.00 handle to trade at a new 12-year low. The precipitous drop in oil reinvigorated the big risk-off move we saw in the first two weeks of the trading year, and the widely-watched Dow Jones Industrial Average of US megacap companies was trading lower by over 400 points at one point during the lunch hour.

With all the big moves in other markets, EUR/USD traders are feeling left out of the party; after all, the world’s most widely-traded currency pair has consolidated primarily within about a 200-pip range since the ECB meeting in early December. To use a sailing analogy, there are a number of crosswinds impacting EUR/USD, but the "northward" (bullish) and "southward" (bearish) catalysts are almost perfectly cancelling themselves out at present.

From a fundamental perspective, both the Eurozone and the United States have seen their fair share of weak economic data so far this year. The US saw disappointing PMI reports from both the Manufacturing and non-Manufacturing sectors, an alarming poor capacity utilization report, and weaker-than-anticipated inflation data (though the monthly job report was a tick better than expected, at least in terms of overall jobs created). Meanwhile, the Eurozone saw a disappointing inflation report of its own in addition to deterioration in the ZEW Economic Sentiment measure earlier this week, partially counter-balanced by a slightly better reading on Eurozone employment and continued decent data out of Germany specifically.

With data from both the US and Eurozone coming in mixed, traders don’t know which way to lean. At the same time, central bankers from both the US and Europe have taken a more passive approach than many traders were anticipating heading into the year. The ECB will have the first opportunity to make some waves with its meeting tomorrow. No action is expected from the venerable central bank, but the tone and comments during ECB President Mario Draghi’s subsequent press conference could tip the ECB’s hand and provide a clue about to expect moving forward. Next week, the Fed will take its stab at calming the markets with a likely-unchanged monetary policy meeting of its own.

Turning our attention to the chart, EUR/USD has spent the majority of the last six weeks consolidating in a 200-pip range from 1.08 to 1.10. While rates have briefly strayed out of both the top and bottom of this range, the 1.08 and 1.10 level remain the most important barriers to watch.

A less-dovish-than-anticipated ECB statement and press conference could take EUR/USD through resistance at 1.10, potentially opening the door for a more meaningful rally toward the 1.1100 handle or higher. On the other hand, a very dovish statement (or even easing action) from the ECB could drive rates through support at 1.0800, potentially exposing 1.07 or potentially previous support in the 1.0500s next. For traders looking a bit deeper, a breakout in the 4hr RSI indicator (either above 65 or below 40) could be a leading or at least confirming indicator of a breakout in the exchange rate itself. 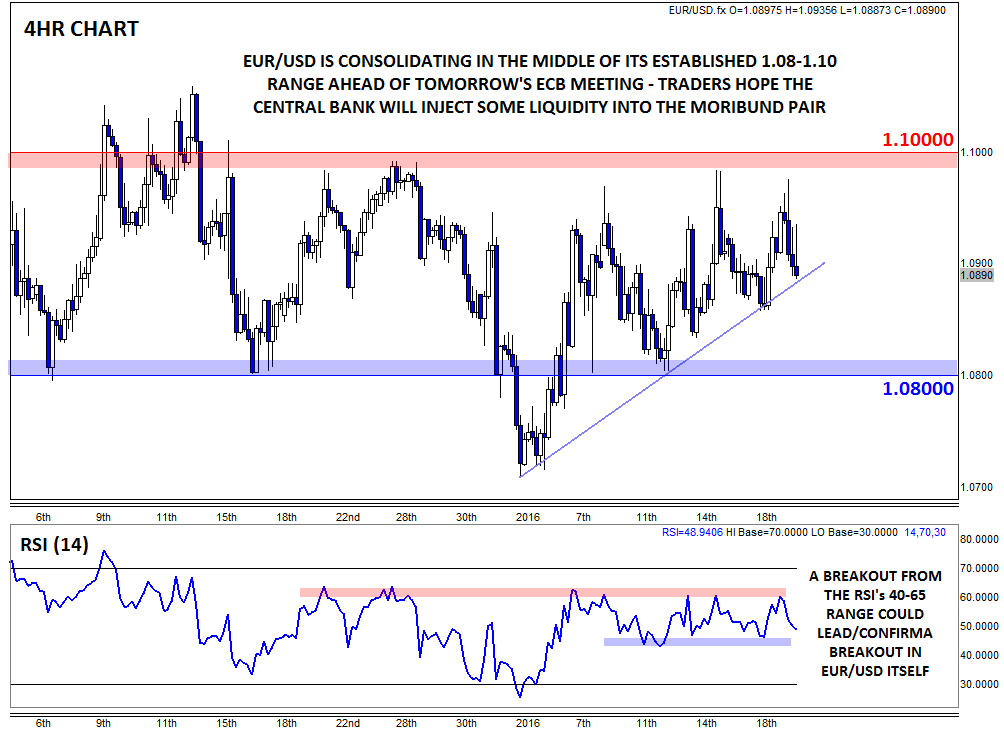