Don’t forget about Canada! With so much focus on the US Non-farm Payroll data on Friday, traders may be forgetting about one of Canada’s most important economic data releases:  July’s Employment Change! Expectations for the headline print is +177,500 vs +230,700 reported In June.  Canada’s Unemployment Rate is expected to drop to 7.4% from 7.8% in June.  Recall that although Canada had a stronger than expected print for June, ALL those jobs were part time jobs.   +263,900 of June’s Employment Change were part time jobs, full time jobs decreased by 33,200!

Despite this decrease in full time jobs, the Bank of Canada felt it was still appropriate to taper their bond purchases from C$3 billion per week to C$2 billion per week.  The next Bank of Canada Interest Rate Decision meeting isn’t until September 8th; two days before August’s Employment Change is released.  Therefore, this will be the only jobs report before their next meeting.  If the economy lost full time jobs again in July,  despite whatever the headline number is, will the BOC taper again in September?

Learn all about the Bank of Canada

On a 240-minute timeframe, USD/CAD had been moving aggressively higher off its June 1st low of 1.2006 and put in a near-term high of 1.2807 on July 19th.  The pair then began moving lower, breaking through an upward sloping trendline from the June lows. USD/CAD halted its pullback at the 50% retracement level from the June 1st lows to the July 19th highs near 1.2407, however, the bounce failed to break back through the trendline from the lows!  Price turned lower today as the currency pair waits for both sets of jobs data tomorrow. 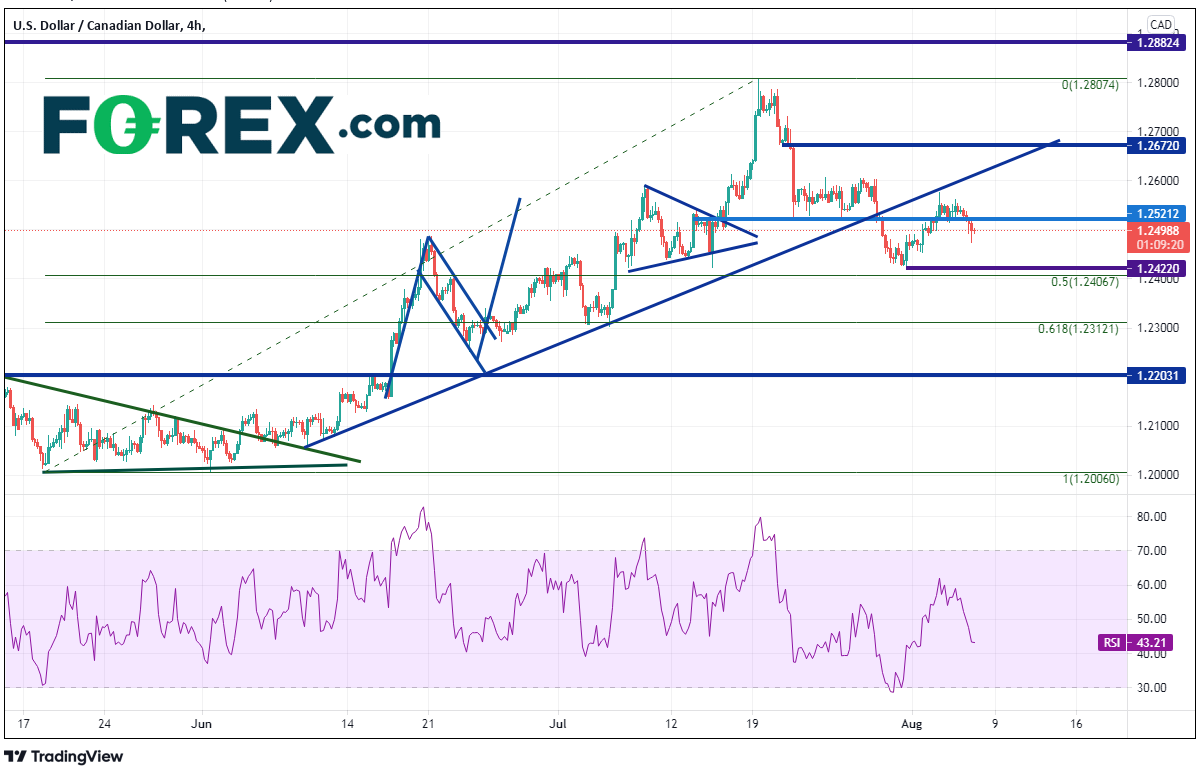 USD/CAD is sitting 50 pips above the 50% retracement level from the June 1st highs to the July 19th lows.  Both US Non-Farm Payrolls and Canada’s Employment Change will be released on Friday morning.  The pair should get its next direction from this economic data.