The euro has started the new week on the back foot, while Spain’s Ibex index bucked the trend of an otherwise slightly positive day in the stock markets in Europe. Political uncertainty continues to dominate the headlines in Spain.

The euro has started the new week on the back foot, while Spain’s Ibex index bucked the trend of an otherwise slightly positive day in the stock markets in Europe. Political uncertainty continues to dominate the headlines in Spain. In a not-so-clear letter to the Spanish government, Catalonian President Carles Puigdemont reiterated that the region is still planning to declare independence but that the declaration of independence has been suspended for now to allow discussions between the Catalans and the Spanish government. However Spain’s Prime Minister, Mariano Rajoy, has made it clear that he is not open to talks because in the eyes of the Spanish law the October 1 referendum was illegal. Consequently, the Spanish government has the right to trigger Article 155 and sack the Catalan regional government if they pursue independence. Spain's Deputy PM Soraya Saenz this morning said Mr Puigdemont now has until Thursday to change his stance or the government will “take the next steps… No one is denying him the chance for dialogue, but dialogue has to be carried out within the law.”

The uncertainty surrounding Catalonia may hold back the euro, although it will probably have more of an impact on the local markets, for example Spanish bank stocks which were down across the board this morning.  As far as the euro is concerned, it too could fall in the unlikely event Catalonia is allowed to go independent, as this outcome is probably not priced in the markets. Otherwise, the single currency generally looks strong, owing to improvement in economic conditions across the Eurozone, including Spain.

Indeed, pointing to increased levels of consumer demand, Eurostat reported this morning that the single currency bloc recorded an 8.6% growth in imports to €155.4bn year-on-year in August. The rate of exports growth was slightly weaker at 6.8%, causing the goods trade surplus with the rest of the world to fall €1.4 billion. There’s not a lot in the way of significantly important economic data from the Eurozone this week, although we will still have the German ZEW Economic Sentiment survey and Eurozone Final CPI estimate on Tuesday while the ECB President Mario Draghi will be speaking on Wednesday.

Among the euro crosses hit by Catalonia uncertainty is the EUR/JPY, which has dropped to test the top of a key support range between 131.10 and 131.70. This area was previously resistance. If it holds as support then the long-term bullish trend would remain intact. However if the buyers do not show up here then we could see the start of a sizeable correction, especially if the 130 level also gives way in the coming days. So it is one to watch closely. 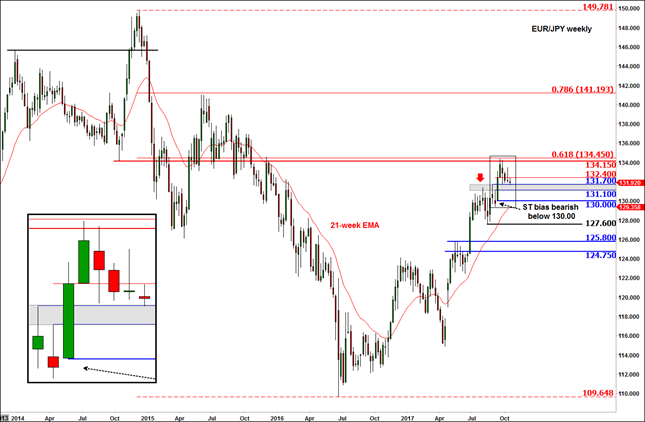