On the policy front, the Fed is clearly already well-entrenched on a path of policy normalization and tightening, and this week’s FOMC decision further reinforced this trajectory. The Fed not only maintained its outlook for three interest rate increases in total this year as well as three more projected for next year, but it also announced a quicker-than-expected start to unwinding its balance sheet beginning this year. In contrast, although the BoE’s Monetary Policy Committee has begun to increase support for an interest rate hike – with three members voting to raise rates versus only one voting for a hike in May – the BoE has not even begun to tighten policy yet. Furthermore, even with more MPC members voting to raise interest rates, it will likely still take quite some time before a majority of members actually votes a rate hike into being.

A primary factor affecting the policy trajectory for both the Fed and BoE is inflation. This is one area where the UK and US have recently diverged. While the BoE warned this week that inflationary pressures in the UK could be stronger than expected, the Fed acknowledged declining inflation in the US and that it would be monitoring price indicators closely. This question of inflation was the primary reason that the BoE this week sounded more hawkish than expected while the Fed was not as hawkish as it could have been.

On the political front, both the UK and US are grappling with their own severe issues at the moment. With the weakening of Prime Minister Theresa May’s mandate after her disappointing performance in last week’s UK election, political uncertainty continues to run high just as Brexit negotiations with the European Union are slated to start next week. This tense political environment may well have contributed somewhat to the BoE decision to keep interest rates on hold.

In the US, President Trump continues to be under intense scrutiny both for potential obstruction of justice charges stemming from his interactions with fired FBI Director James Comey, as well as accusations that Trump’s team may have colluded with the Russian government during last year’s campaign season. Apparently, however, worries that Trump’s political woes could affect US economic growth going forward did not spill over into the Fed’s decision to raise interest rates and sound an optimistic tone this week.

Both the US dollar and British pound received an initial boost from the Fed and BoE, respectively, after central bank statements were seen as more hawkish than expected. However, the Fed is already well ahead of the BoE in its tightening cycle, as the BoE has not yet even begun. With that being said, what could hold the Fed back while pushing the BoE forward are the currently divergent inflationary pressures between the UK and US – the BoE sees potentially overshooting inflation while the Fed is dealing with declining inflation. Politically, the impending start to a long, drawn-out process of Brexit negotiations has the potential to weigh heavily on the pound, especially after the substantial weakening of Theresa May’s negotiating position. In contrast, US political turmoil, while also a possible threat to the US dollar, is not likely to have as great of an impact. On balance, as it currently stands, the factors supporting the dollar appear to outweigh those supporting the pound, while potentially negative factors also appear more pronounced for the pound.

From a technical perspective, GBP/USD broke down below a key uptrend line extending back to mid-March in the immediate aftermath of the surprise UK election outcome last week. The breakdown further extended towards 1.2600 support, but has since rebounded back up towards the key 1.2800 resistance level. With formal Brexit negotiations beginning next week, pressure on the pound could return. And with any resumption of a Fed-driven dollar-rebound next week, this pound pressure could prompt a further GBP/USD breakdown towards the noted 1.2600 support level and below. 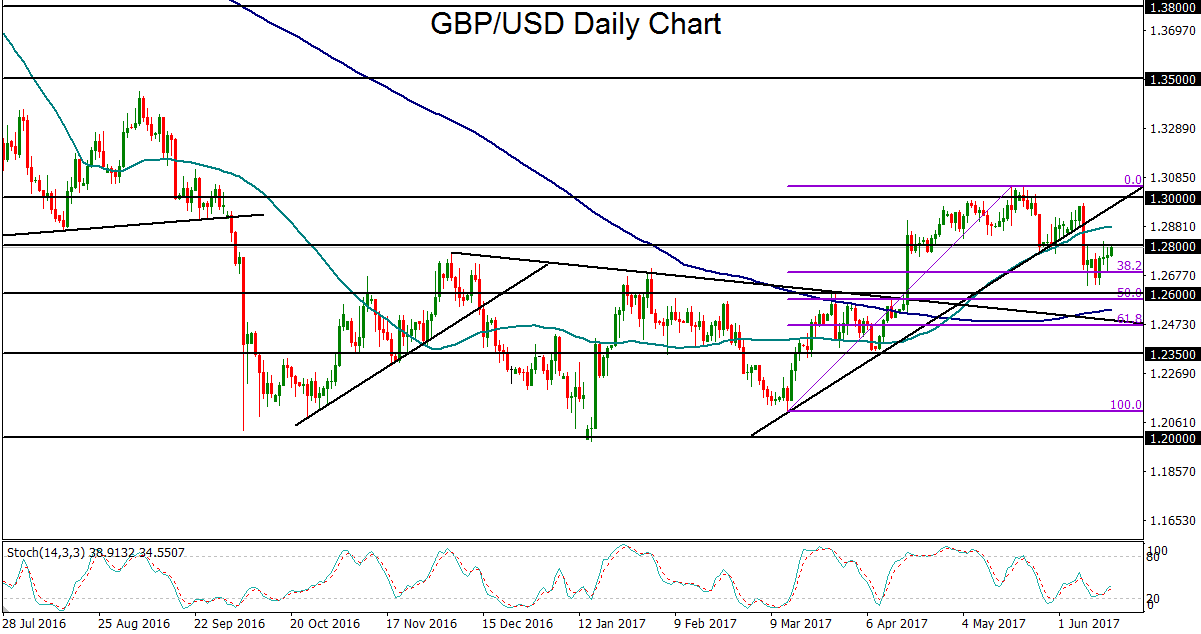