This week has all been about major central bank meetings and as we had anticipated last week, it was indeed the European Central Bank which caused the most market impact with its decision.

This week has all been about major central bank meetings and as we had anticipated last week, it was indeed the European Central Bank which caused the most market impact with its decision. The EUR/USD almost fell 300 pips from its high on Thursday and European stocks rallied sharply after the ECB indicated that interest rates won’t rise until at least mid-2019, even if asset purchases were going to finish at the end of December. This was as dovish as the ECB could get given the circumstances, with inflation on rise and unemployment declining.

The Federal Reserve’s decision to raise interest rates by 25 basis points and signal two further hikes for the rest of the year a day earlier was met with scepticism from the dollar bulls who could not help the greenback to overcome its recent weakness. But Wednesday’s bizarre reaction proved to be temporary and by the very next day the dollar was up across the board, with the Dollar Index undoubtedly helped along by the big slump in the EUR/USD exchange rate. The dollar was in consolidation mode on Friday.

Meanwhile, the Bank of Japan decided to keep its monetary policy on hold, in a move which was in line with the expectations. The BoJ therefore again stood firm against the global move towards tighter monetary conditions among the world’s other major central banks. With a benchmark interest rate of minus 0.1%, a cap on 10-year bond yields at around zero and asset purchases of ¥80tn a year, the BoJ thus remains one of the most dovish of central banks out there. And the central bank is in no rush to exit the extraordinary loose policy any time soon. Quite the opposite, in fact, as the Japanese economy’s struggle to produce inflation continues. "Consumer price growth is in a range of 0.5 to 1.0%," the BOJ said in its policy statement. This was a slightly bleaker view of inflation than in the previous meeting in April, when the BoJ said inflation was moving around 1%. The growing disparity between the US and Japanese monetary policies makes us fundamentally bullish on the USD/JPY in the long-term and we expect a major breakout above 111.00-112.00 resistance zone in the near future.

After three major central bank meetings and lots of important macro pointers this week, the economic calendar is understandably a little quieter next week. However, we will still have two more central bank meetings, a raft of speeches by top central bank officials and important data from New Zealand and Canada, and the OPEC meeting. What’s more, we will find out whether any trends are formed following this week’s key events, with early indications suggesting the dollar may continue pushing higher in the expense of the euro, and the latter could weaken against the pound as we highlighted the possibility in THIS report earlier. So, there’s plenty to look forward to.

Fresh from delivering what turned out to be a dovish policy statement and press conference on Thursday, the ECB’s President Mario Draghi will kick off the plethora of central bank speeches on Monday at the European Central Bank Forum on Central Banking, in Portugal. Draghi will speak again on Tuesday and on Wednesday he will participate in a panel discussion alongside RBA’s Lowe, BoJ’s Kuroda and Fed’s Powell. However, it remains to be seen whether these speeches will have any impact on the markets given that the ECB, BoJ and Fed all made their policy decisions in the preceding week. It is highly unlikely that things will have developed in the interim to warrant a change in tone.

SNB and BoE unlikely to cause any fireworks

Regardless, central banks will remain in focus on Thursday when the Swiss National Bank and the Bank of England make their interest rate decisions. As far as the SNB is concerned, you can almost guarantee that the rate statement will be more or less unchanged from the previous meeting and so no changes will be made in monetary policy. The Bank of England was actually meant to raise interest rates in May but was forced to think twice after a series of data misses in the UK. In that meeting, BoE policymakers ended up voting 7-2 to keep rates unchanged at 0.5% and this is how they are most likely to vote again, even if this month’s macro pointers have on the whole been much better. However, the BoE wants to be sure that the economy is recovering sustainably before it raises borrowing costs again. Rate futures currently show around a 50% chance of a hike in August, the next time the BoE updates its growth and inflation forecasts. The BoE’s Governor Mark Carney has suggested that interest rates are likely to rise by the end of this year. However it is very unlikely to be this month.

A handful of key macro data for FX traders

As well as the above central bank meetings, we will also have some important macro data to look forward to next week. Among other things, New Zealand GDP (Thursday), Eurozone manufacturing and services PMIs as well as Canadian CPI and retail sales (all on Friday) should keep FX traders busy.

A word few words on OPEC

Oil prices should move sharply on Friday, June 22. That’s because the world's largest oil producer Saudi Arabia will dictate the proceedings at the meeting of OPEC and a group of non-OPEC producers and expectations are they will push for a change in the current strategy that was struck in November 2016 to curb oil production in a bid to support prices.

Concerns over a supply shock has sent oil prices sharply higher in recent months due to unplanned outages in places such as Venezuela and as Iran faces re-imposition of US sanctions following President Donald Trump’s decision to withdraw his country from a nuclear accord. If Saudi and co. push for higher output levels, there is a risk Iran might decline to participate and the agreement could fall apart, prompting a supply shortage and further upward pressure on crude oil prices. However, Saudi and Russia, have indicated they may agree on some bilateral agreement, with or without Iran.

So it remains to be seen if there are and agreements or arguments at the June 22 meeting. If supply restrictions are eased then this should lead to weaker oil prices while if status quo is maintained or there’s an agreement for only limited rise in supply, then this should keep oil prices support. 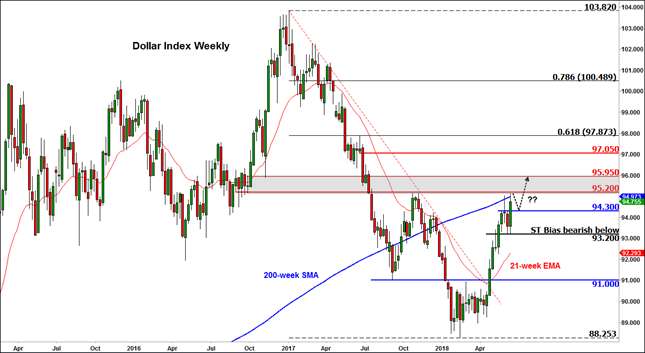