The CAD’s drop was more pronounced against the euro, with the latter managing to catch a bid earlier today. Consequently, the EUR/CAD managed to hold its own above the 200-day moving average and long-term trend line around the 1.5200 area for the second consecutive day.

Today has been a little light on the data front with the exception of Canadian employment figures, which were released earlier. Headline employment had been expected to have risen by around 17,800 last month, while the unemployment rate was seen steady at 5.8%. While the unemployment rate did remain at 5.8%, the headline figure disappointed as employment fell by 1,100. However, the drop was mainly due to a slump in part time jobs while full time employment actually rose more than expected. Nonetheless, this was not enough to help support the Canadian dollar, which fell across the board. It even fell against the US dollar, with the latter losing ground against a number of currencies today.

The CAD’s drop was more pronounced against the euro, with the latter managing to catch a bid earlier today. Consequently, the EUR/CAD managed to hold its own above the 200-day moving average and long-term trend line around the 1.5200 area for the second consecutive day. This area is technically very important, so traders need to watch it close. If in the coming days, this level breaks down then there is really not much further support until the psychological 1.50 handle.

However, given the fact that the EUR/CAD has consistently found strong support from the 200-day average, it may make more sense to look for bullish setups instead, next week. Technically, though, the short-term trend is bearish, so that needs to change before we turn bullish on this pair. One ideal scenario from a bullish perspective would be if rates go back above the 1.5320-1.5375 resistance range. The lower end of this range is a broken support level while the upper end marks the high from 2017. Should the EUR/CAD go above here then we could see the resumption of the long-term bullish trend. But for now though, any bounces should be treated with extra caution.

Don’t forget to watch the economic calendar next week, especially data from both the Eurozone and Canada for this EUR/CAD pair. Eurozone and German GDP estimates will be published on Tuesday along with German ZEW survey. From Canada, next week’s key data is CPI on Friday. 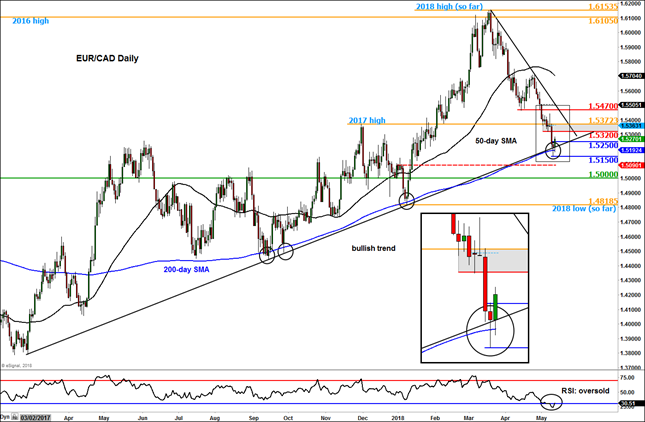