Company profits are set to be squeezed further as China’s producer prices rose to a near 3-decade high of 13.5%. The China A50 index was quick to break lower.

Producer prices rose to their highest level since 1996 last month, although consumer inflation is yet to close the gap form runaway factory prices. And this is despite Beijing’s best attempts a curb record high coal prices. To put that into perspective, it was when England last hosted the European Cup and made it to the semi-finals.

The power crunch has forced Beijing to implement output curbs which is exacerbating higher prices, as a time they are trying to keep a lid on runaway prices. Policy-wise, China find themselves in a tricky spot because higher prices limit the amount of easing they may want to implement, despite some form of easing being required to increase domestic demand. According to a Reuters poll, economic growth for China is expected to slow down to 5.2% y/y in Q3, down from 7.9% in Q2 and this will likely be revised lower after today’s figures.

Consumer prices are also starting to turn higher with CPI rising to a 1-year high of 1.5% y/y, and up 0.7% m/m. It’s hardly near the double-digits like producer prices, but it serves as a reminder that inflation is returning and now beginning to hit consumers, ahead of today’s highly anticipated inflation report form the US tonight.

In other yet related news, President Xi and President Biden are to meet next week at their virtual summit. Let’s both presidents are fully alert (or awake, Joe…) for the duration of the occasion 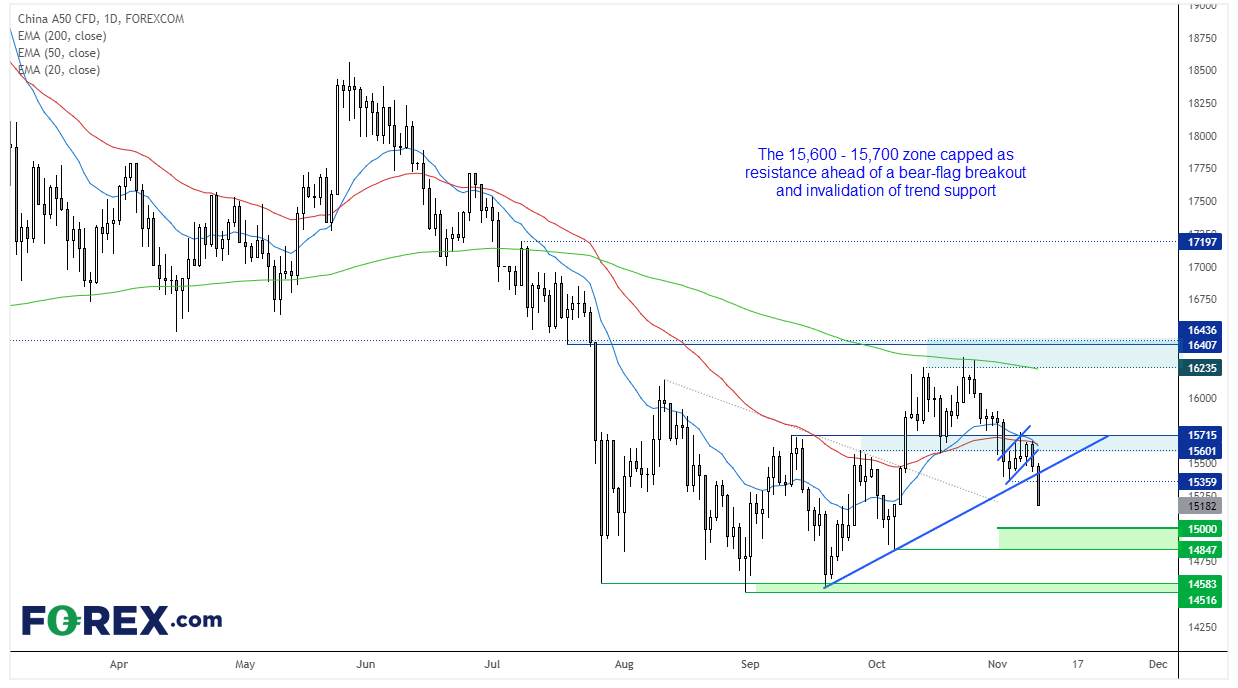 Asian equites were broadly lower across Asian following today’s report. The China A50 is around -1.7% and one of the worst performers of the session. We can see that the resistance zone around 15,700 continues to cap gains and momentum has now turned lower. A bearish engulfing candle formed yesterday, and today’s action has seen prices break trend support.