The AUD/USD has been coiling for a few weeks now. The bodies of the weekly candlestick bars have been getting smaller as price tested long-term support around 0.7650.

The AUD/USD has been coiling for a few weeks now. The bodies of the weekly candlestick bars have been getting smaller as price tested long-term support around 0.7650. This was formerly a major resistance level. In addition, it is also where a long-term bullish trend line comes into play. Thus, the fact that the AUD/USD is holding above this level is significant. Could we now see some range expansion to the upside?

Well, judging by the price action on the daily chart, the move could be in motion already. Today the Aussie has probed liquidity on both sides of Friday’s range. First, it testing liquidity below Friday’s low and once it was clear that the supply was limited there, the buyers stepped in and drove the unit to above Friday’s high and short-term resistance at 0.7700. If there’s now acceptance above this level then we may see a nice move higher over the coming days. But failure to hold above this level would be a major warning sign for the bulls.

In terms of resistance, 0.7720 is an interesting level to watch in that it was formerly support and resistance. If the Aussie were to break above here then there’s little further resistance seen until 0.7780. Above this area is the convergence of the 50- and 200-day moving averages at 0.7805, followed by 0.7850, a level which was the last support prior to the breakdown.

Meanwhile if support at 0.7650 were to break down now then this could lead to a sizeable drop, with the first bearish objective in this case being the prior lows at 0.7530. 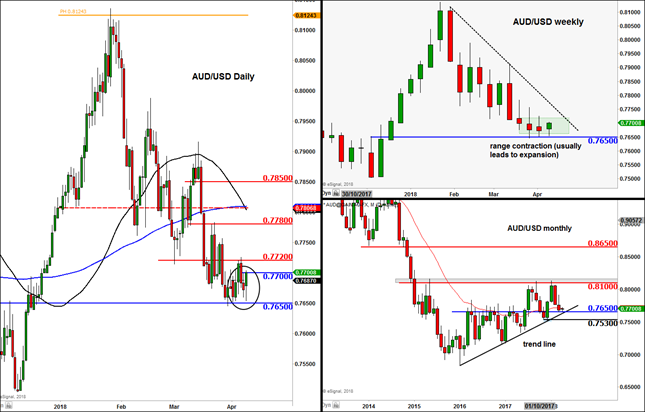