Facebook has changed its name to 'Meta', reflecting its ambitions to become a ‘metaverse’ company. But which stocks have tried this trick in the past, and has it played well with the markets?

After teasing its metaverse plans in its latest earnings call, Facebook has announced its new name: 'Meta',

Let’s take a look at five other stocks that have changed their branding, and how that affected their share price.

The Apple Computers moniker described Apple pretty well for most of its early years. Since its initial success in the 1980s, the company had focused mostly on computers and laptops.

The launch of the iPod in 2001 marked a departure, but it wasn’t until Steve Jobs took to the stage at the Macworld Expo 2007 and announced both the iPhone and the Apple TV that the business truly changed direction. At the same time, he revealed that the business was changing its name from Apple Computers to just ‘Apple Inc.’.

Needless to say, the change was a success. And while Apple has maintained its core computer business, it has expanded even beyond electronics in the years since, relaunching Apple TV as a streaming service.

When Apple Computers rebranded to Apple Inc, its share price was trading in low single digits, but the company has steadily gained year after year since. In January 2020, the Apple share price reached $75, before continuing to power to an all-time high of $157 on 1 September 2021 – marking a more than 3000% rise from 2007’s $5 level. 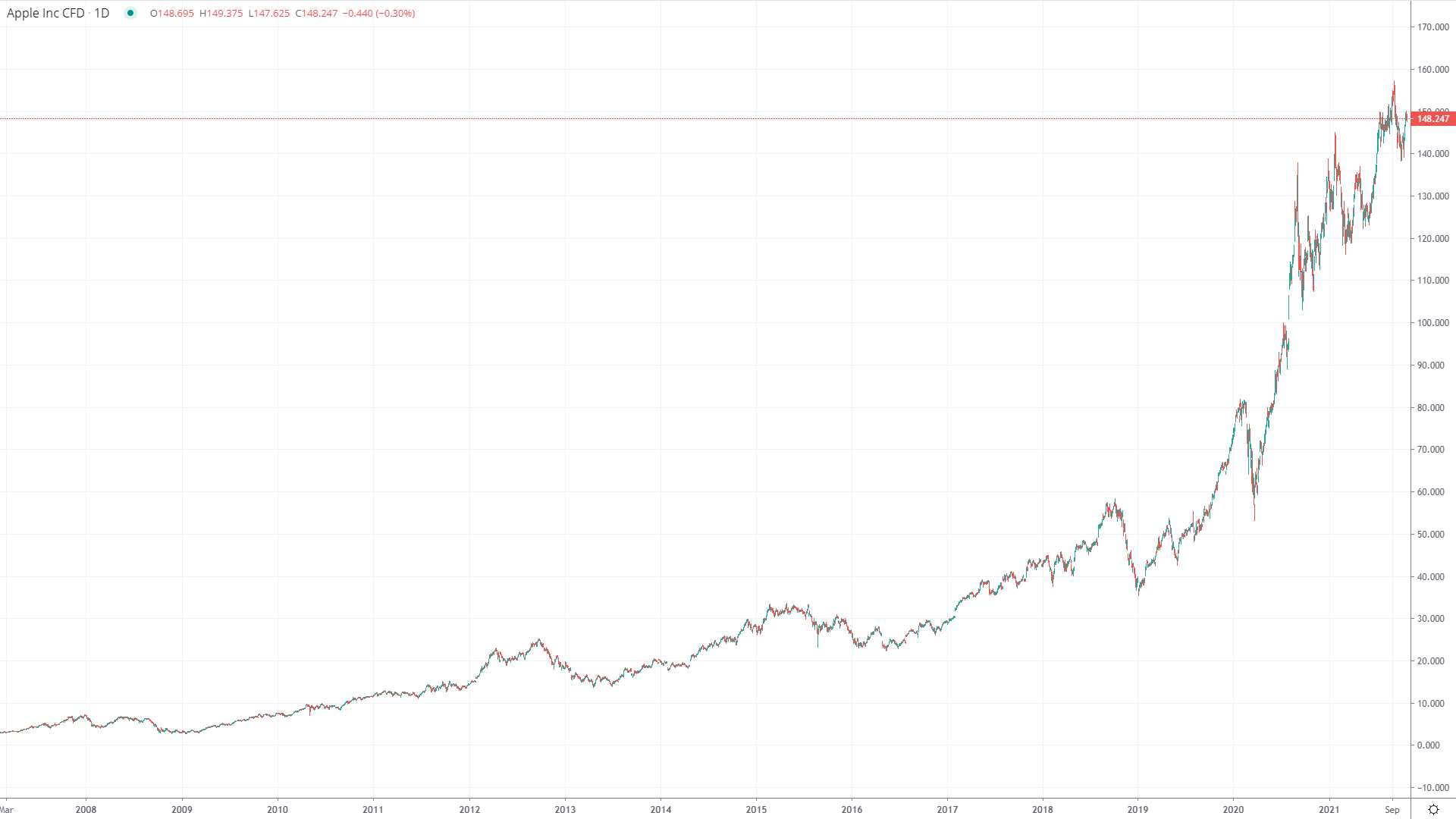 Where next for Apple?

Can Apple Inc continue its meteoric rise, or is a bear run on the horizon? Open your FOREX.com account today to take your position.

Alternatively, trade all the stocks listed in this article – plus over 10,000 more markets – risk free with the FOREX.com trading simulator.

Much like Apple, Google changed its name to Alphabet due to a move beyond its core business.

Google had been expanding from its basis as a search engine for some time, notably acquiring Android in 2005 and YouTube in 2006 – as well as launching multiple new ventures itself, some successful and some not.

Keeping every brand under the Google umbrella caused several issues. For instance, investors didn’t get full transparency over how each one impacted the company’s bottom line, hurting its share price. It also raised the risk of Google coming under fire from antitrust regulators.

So in 2015, the company announced that it was changing its name to Alphabet, and restructuring as a conglomerate. Why Alphabet? Because several of the company’s new ventures were ‘alpha bets’, long shots that they hope would make a return on investment.

Google was trading around $650 per share when it changed its name to Alphabet. Since then, the share price has formed a series of higher highs and higher lows, hitting $1500 just ahead of the pandemic hitting in February 2020. After a dip lower to $1,000, the Alphabet share price skyrocketed to an all-time high of $2925 on 30 August 2021, marking a 350% increase since its name change.

Stocks don’t always rebrand to reflect expanding operations, though. In 2013, Research in Motion (RIM) changed its name to BlackBerry to ‘put the BlackBerry brand back at the centre’ of the company.

The announcement was made at the same time as the unveiling of BlackBerry 10, a much-awaited new operating system. But by this point, the company had already been shedding customers to its rivals Apple and Samsung for several years.

BlackBerry’s peak in 2010 was already long gone. Since that point, its share price had fallen almost 90%, as investors feared that the business wasn’t set up to compete with a new generation of smartphones.

When Research in Motion changed its name to Blackberry the share price moved a gear lower, with investors seemingly unimpressed.

Blackberry was trading around $14-$15 before the name change in 2012; the following year it was consolidating around the $10 price point after losing a third of its value. Whilst the share price has seen its fair share of volatility – including a spike to $28.77 in January 2021 as it became a short squeeze focus on Reddit – it has since settled back down to around $11 per share.

Priceline.com was founded in 1997 by Jay S. Walker, using a unique ‘name your own price’ model to take the US travel industry by storm. By 2018, the Priceline Group had grown to oversee an empire of bookings websites and travel aggregators: including Booking.com, Agoda.com, Kayak.com and OpenTable.

The original pricing model had been dropped, though. And Priceline.com was barely known or used outside the US – accounting for a fraction of the company’s revenue. Instead, Booking.com drove the lion’s share of profits, as one of the world’s biggest travel websites.

What do you do when your original venture has been eclipsed by an acquisition? In Priceline’s case, it was change your brand name to Booking Holdings (with a ticker of BKING) to ‘change the perception of what our company is’.

The week that Priceline changed to Booking Holdings, its share price rallied 6% to $2033. In the following weeks the share price trended even higher, reaching $2220.

However, Booking Holdings was unable to maintain these gains and eased back to around the $1900 mark – where it traded until the pandemic struck. After a brief stint lower the share price has surged higher to current levels of $2400, 25% more than where it was trading the week it changed its name.

Not every rebrand is driven by products. In the case of Weight Watchers, changing attitudes towards dieting and weight loss led the company drop its name down a few sizes, to just WW.

The switch was driven by a new CEO, Mindy Grossman, who refused to attribute new wording to the letters but said they reflected the company’s new focus on ‘wellness’ instead of weight loss. Oprah Winfrey, who owns a 10% stake in business, praised the new direction.

The move was largely seen as a reaction to growing stigma attached to the idea of weight loss. Instead, a number of campaigns have launched to push the concept of fitness and health as opposed to staying thin.

Investors may not have seen much need for a rebrand. A stellar few years had seen the stock hit a record high shortly before the announcement.

Since rebranding, WW’s share price has trended lower, dropping from an all-time high of $106 just prior to the name change to an all-time low of $10 as the pandemic hit in mid-March 2020. While the stock managed to rise four-fold from that low to $40 by mid-2021, these gains were short lived and the share price today trades around $20, some 80% lower than pre-name change. Clearly, Facebook has a lot of examples to learn from for its rebrand. The closest might be Alphabet. Like Google in 2015, Zuckerberg’s company has expanded from its original business model with a diverse set of new ventures and acquisitions.

Facebook also has its own regulatory worries to consider, with social media platforms coming under increased scrutiny around the world.

However, in this case the company’s leadership has a distinct area they want to move into: the ‘metaverse’. The metaverse is tech-speak for a digital platform where users can communicate, travel, purchase goods and more in a 3D world. Facebook hopes that the realisation of the metaverse can help it hit new heights, underpinned by its existing investments into VR.

Will the metaverse help Facebook leave its controversies behind and overtake its FAAMG rivals? Only time will tell. Follow the steps below to take your position.