After Monday's bounce and a firmer open this morning, bearish speculators evidently stepped back in at relatively higher levels.

Monday saw both stock and bond markets bounce back following last week's falls. The move was partly driven by short-side profit-taking as the pace of the selling had already slowed down at the end of last week. The lack of any major economic news at the start of this week and quiet market conditions meant speculators found it hard to justify pushing the 'sell' bottom again without a reason or a small pullback first. But after Monday's bounce and a firmer open this morning, bearish speculators evidently stepped back in at relatively higher levels. European stock indices were quick to surrender sharp gains about an hour after the open. Apart from a few disappointing earnings results, there were no obvious triggers behind this latest sell-off. It appears as though investors are becoming increasingly concerned about the prospects of tighter monetary conditions across many developed economies as central banks move away from the era of zero interests amid rising levels of inflation and economic growth. As interest rate expectations rise, certain higher-yielding stock market sectors may lose their attractiveness on valuation concerns. So far however we haven’t seen a big enough drop to validate this view, but that could only be a matter of time.

In Europe, the likes of the DAX and FTSE 100 continue to print bearish price action. The latter has been trending lower ever since it broke to a new all-time high at just shy of 7600 at the start of June and it wasn’t helped by poor earnings from M&S today. The resulting selling pressure has created a series of short-term lower lows and lower highs. Old support levels have turned into resistance. The most recent example of this bearish price action was evidenced this morning when the re-test of the broken support area at 7380/7400 was rejected immediately after the London open. As further support levels break, the selling pressure is only likely to increase. Only when there is a break in market structure of lower lows and lower highs will the bearish trend end, unless we see a distinct reversal pattern first.

The FTSE was testing the upper end of another key support range at the time of this writing at 7280-7305. If this area fails to hold the index up then we could see a return to the 200-day moving average at 7190 in the coming days, with the possibility of the index going further lower over time.  However if the upper end of the above-mentioned resistance area at 7380/7400 breaks first then this would end the short-term bearish bias. 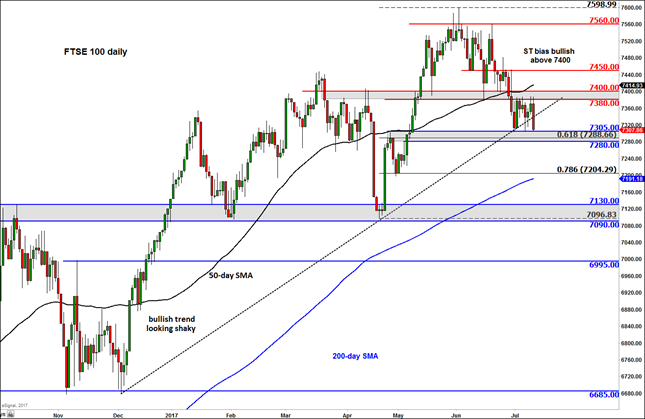