<p>There are clearly several very major events within the next two weeks that have substantially intensified speculation on the British pound and, to a lesser extent, the US dollar. This speculation ahead of these events has prompted a sustained spike in volatility for GBP/USD. For the past week, this volatility has pressured the currency pair to trade significantly lower, breaking down below key support levels.</p>

There are clearly several very major events within the next two weeks that have substantially intensified speculation on the British pound and, to a lesser extent, the US dollar. This speculation ahead of these events has prompted a sustained spike in volatility for GBP/USD. For the past week, this volatility has pressured the currency pair to trade significantly lower, breaking down below key support levels.

For sterling, the UK Consumer Price Index for May was released on Tuesday, showing another lower-than-expected inflation reading of 0.3% against expectations of 0.4%, which has placed additional pressure on the pound. Upcoming this week in the UK are other major events, including key data on the employment situation on Wednesday and then the official bank rate announcement and monetary policy summary from the Bank of England on Thursday. No change is expected in interest rates on Thursday, but the monetary policy summary could reveal significant concerns over both the state of the UK economy and inflation as well as the risks presented by the upcoming EU referendum.

This brings us to the most potentially pivotal near-term event that could have a dramatic effect on the pound – the UK’s EU referendum scheduled for next week on June 23rd, when a vote will be held to decide whether the UK stays in the European Union or leaves it ("Brexit"). In the run-up to this referendum, market fears of a possible Brexit outcome have only recently begun to intensify as the most recent polls have shown the Leave camp assuming a significant lead. These increased market fears have been manifested as growing pressure on sterling, while safe haven assets like gold, the Japanese yen, and even the US dollar have been given a boost.

As for the dollar side of the GBP/USD currency pair, although expectations for a summer rate hike by the Fed have plunged sharply, the dollar has been supported both by the noted safe haven flows as well as the Brexit-driven pressure on both its pound and euro rivals. In the days ahead of the referendum, the current trend for both the pound and dollar could very well continue, especially if polls continue to show momentum for the Leave camp. This could lead to significantly further losses for GBP/USD before June 23rd. How the currency pair trades in the aftermath of the referendum, however, is entirely dependent upon the actual outcome of the vote.

From a technical perspective, GBP/USD has broken cleanly below a key uptrend line that extended back to the multi-year low of 1.3835 that was hit in late February. As the risk of a Brexit outcome continues to weigh on the pound in the run-up to the EU referendum, GBP/USD could continue to extend this breakdown, with the next major downside target at the 1.4000 psychological support level. Below 1.4000, further losses could open the way towards the 1.3800 level, last approached during the noted late-February low, followed by the 1.3500 support level. Of course, in the event of an actual Brexit outcome, the downside for GBP/USD could be substantially worse. In contrast, a vote to remain will take the event risk off the table and likely lead to a considerable rise and alleviation of pressure on both sterling itself as well as the GBP/USD currency pair. 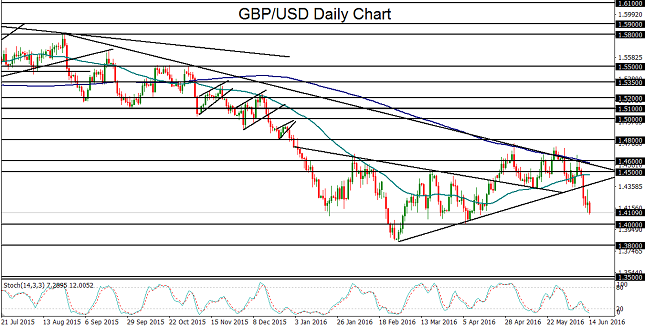